In the MindShift blog this morning, I read this little tidbit:

This kind of standards-based grading approach is a growing trend in some corners of education. It’s part of a push to make sure kids are actually mastering the information they’re supposed to learn, not just playing a points game.

The article is “How Teachers Are Changing Grading Practices With an Eye on Equity,” and it carries on an interesting and important discussion.

Interesting and important to me, at least! But, then again, I wrote about mastery-based teaching and ditching traditional grading systems in Quality Education: Why It Matters, and How to Structure the System to Sustain It. Congratulations to NASA on another successful Mars landing!

I enjoyed watching the live feed of the Jet Propulsion Laboratory team as they received the signals indicating that the InSight vehicle had successfully completed its approach to the red planet, deployed its parachute, and landed. Well done!

This question came up on Facebook the other day, when someone was looking for examples of books without definite antagonists. Many folks said that in stories like The Martian (and another recent book you might have heard about), the antagonist — the villain, if you will — is Nature. Man against the elements, as it were.

This morning, in the latest in his Writing Wednesdays series, Steven Pressfield wrote:

Sometimes the villain is entirely inside the characters’ (almost always the protagonist’s) head.

The villain can be a fear, an obsession, a desire, a dream, a conception of reality, an idea of what “the truth” really is.

What this means is that the ultimate antagonist is not a man-eating shark or a monster from space. It is an idea carried in our own heads (we’re the heroes, remember, of our own lives) [and the] turning point for us … comes when we see through the Wizard’s curtain and reject this idea once and for all.

(Nothing horrific here: a “zombie” post only in the sense of coming back from the electronic dead.)

Here again I’m reprising an old blog post that I particularly like. It was published on this date in 2012 on the old NCSU-IES blog, which unfortunately no longer exists.

At the time, we had been having an internal debate over whether we provided “training” or “education” to our clients. There was a definite push by the unit leadership to say we were not trainers but instead were part of the “education” mission of the university.

Unsurprisingly (and perhaps unwisely), I pushed back:

The distinction between the two, as I understand it, is a matter of practicality. Training gives us skills and techniques we can practice, hopefully with enough knowledge to know when and where they will be useful. Education, meanwhile, gives us new knowledge and insights, and a better understanding of the world. When I taught CPR, I trained my students in how to apply the life-saving methods; when I taught leadership and management, I educated my students about different aspects of and approaches to the two.

[In 2011] one of my colleagues showed a tag cloud she made of comments from our clients and “training” was the largest word in the cloud (i.e., had been used by clients most often). Immediately, a discussion started about how we might change that perception and the relative worth of one versus the other. The discussions have been interesting. From what I’ve observed, on one side of the debate are folks who came from industry and say of course we provide training. On the other, folks who grew up in the academy tend to downplay the T-word in favor of education. In the middle, folks who have spent time in both camps lean one way or the other, depending on how deeply they’ve immersed themselves in the campus culture.

Color me unimpressed by the whole thing, and firmly on the side of training.

I admit, I started out with my share of the “we’re-the-university-so-of-course-we-educate” mindset. But recently I’ve been studying and refining a model of how we … should fit into the academic side of the university, and after thinking about it I’ve (to borrow a phrase) come to the dark side.

The way I see it, education and training are two sides of the same coin: teaching. Both imply the delivery of knowledge — or at least information — from a person who has it to a person who needs it. I’ve flipped that metaphorical coin a few times and come up with what I see as major differences between training courses and classroom education….

At this point the original post presented the differences in tabular form, but I’ve arranged them in a bulleted list for this “zombie” version: 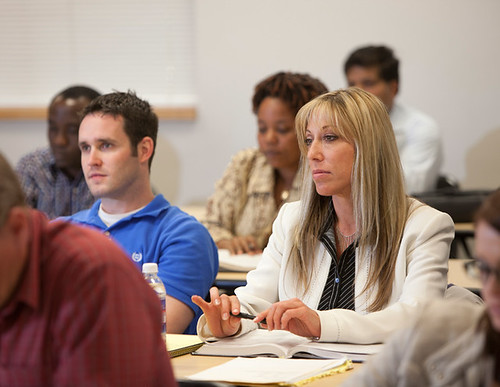 Whether education or training, it’s all teaching and learning. (Image: “Adult Students in Business Class,” by Newman University, on Flickr under Creative Commons.)

As part of its transition to become the “Industry Expansion Services,” the staff deleted the finale of that old blog post (and the entire blog itself,* which I still think violated the rules for retaining official state records). A former co-worker recovered what was left of the blog and sent me the results, and that post ends right after the table with the enigmatic “From that p.”

However, thanks to the “Wayback Machine” Internet Archive, I found the remainder:

From that perspective, our … courses and services fit much more into “training” while the university’s more general offerings are clearly “educational.” And that’s okay! In the end, it’s all teaching.

Finally, on the Internet I found an interesting paper on the subject of education versus training, which included this amusing item:

So I say: of course we train people (though, not in sex). And if we educate folks at the same time — and we often do — that’s a bonus.

My perspective on this hasn’t changed: Education and training are both good and useful things. It’s all teaching.

And if you’re involved in the business of teaching — wherever you do it and whatever you teach — my hat’s off to you.** Thanks, and keep up the good work!

___
* I can’t even provide a link to the old NCSU-IES blog, since they now redirect to the College of Engineering page for some reason. I find it ridiculous.
** For more on teaching and learning and organizing schools and systems for better teaching and learning, may I present Quality Education.

I spent the weekend at the ConCarolinas science fiction and fantasy convention, where I had the great pleasure of talking with a few people about my novel that’s in the publication pipeline — which is a bit surreal to me — so it seemed fitting to select a quote that relates to books to start the week. Teddy Roosevelt wrote,

Books are almost as individual as friends. There is no earthly use in laying down general laws about them. Some meet the needs of one person, and some of another; and each person should beware of the booklover’s besetting sin, of what Mr. Edgar Allan Poe calls “the mad pride of intellectuality,” taking the shape of arrogant pity for the man who does not like the same kind of books.

All of us who write and who hope our writing reaches an audience would do well to remember that some of what we publish will “meet the needs of one person, and some of another.” That follows along with Lincoln’s observation about not being able to please everyone all the time. We can only hope that our work finds its way to those who will appreciate it, and perhaps even to those who will value it.

But Roosevelt is right that we should beware of dismissing books that meet other people’s needs, and thereby of dismissing those other people. In the science fiction and fantasy field, especially recently, fans and even authors have taken sometimes excessive delight in disparaging works we consider hackneyed or offensive or otherwise worthy of derision.

In some cases we’ve reacted to what we perceive as unmerited success (“How could so many people buy X?”), and in our most self-conscious moments we might admit to coveting that success for our own work. Alternately, we might think we are being discerning, perhaps even sophisticated; we might think we are making important statements about art and its relation to the world; we might just be trying to make a joke.

Regardless of the reason we find to scorn a book or someone else’s taste in books — we dislike the author (or the person) on some level, we prefer another subgenre, we haven’t had enough fiber that day — we would do well (I would do well) to realize that what we think of as a book’s faults or merits will differ from what someone else thinks, and we should allow one another our different opinions. The market, and time, will always be the final arbiters.

So, do you like books? If yes, great! If no — if you don’t like any books — then maybe you just haven’t found the right books for you yet. I hope you’ll keep looking!

And if so, what books do you like? Excellent! Whatever books you like, for whatever reason, that’s wonderful. Keep reading!

And have a terrific week!

Fourth in a series of blog posts about the songs on my new CD, Distorted Vision.

What type of distortion do I mean in the title of this blog post? Okay, yes, it’s pretty obvious, but I didn’t want to come right out and say “D is for Distorted Vision.” “And my crystal ball is cracked, no magic images appear.”

The title song of my new CD, actually called “My Distorted Vision” in full, opens like this:

The limits of my vision change in unexpected ways
I can’t get my mind to focus on the things that really matter
I see the past too clearly, the present moments are a blurry haze
And there are dirty, shuttered panes between me and happily ever after

This song originated in kind of an odd way — or, more odd than many of my songs. Often I’ll start out with an idea; for instance, “Another Romulan Ale” from my first album came about because I wanted to write a Star Trek drinking song. In this case, however, I had one line in particular occur to me — “the old gray man is a far, far cry from what I used to be” — which is both a nod to my alter ego, the “Gray Man,” and an admission that I’m not as young as I once was. So I decided to write a song around that line.

This is as close to a rock-and-roll song as I’ve ever written. I was very pleased that music engineer, arranger and studio musician par excellence Mark Minervino was able to give it a feel very much like the Moody Blues, one of my all-time favorite bands.

And even if you can’t relate to the feelings expressed in the song, I hope you like “My Distorted Vision”!