I Ran Out of a Funeral, and Then the Weekend Got Worse

Skip this entry if you don’t want to know how pathetic I am.

I should have known, when I got out my black suit for the funeral this past Saturday, that it was not going to go well. I had left the program from the last service I attended in the breast pocket of the jacket. It was the program from Jill’s memorial service.*

I should have known, when I read through the funeral program, that it was not going to go well. Instead, I barely saw the words. I was too caught up in my own thoughts: first, selfishly and (admittedly) angrily wondering why this person got to live 21 years longer than Jill did; second, just as selfishly wishing my recent ladyfriend was there, so I could hold her hand to try to make it through the service. But we had broken up a few months ago — itself a tragedy of errors, many caused unwittingly by me — and I had no one there with me.

Then the first song in the program began: “In the Garden,” a song that featured prominently in Jill’s life and, as a result, in her memorial service.

And came home to a very disappointing package in the mailbox. I’ve only told a couple of people about it, and I won’t go into its contents here; suffice it to say that it was disturbing and disheartening.

Now, I must admit that the weekend wasn’t all bad. I had a nice visit with friends I hadn’t seen in some time, and got to spend some time in the recording studio where we made some progress on the last couple of songs for the new album.

But the worst was yet to come. 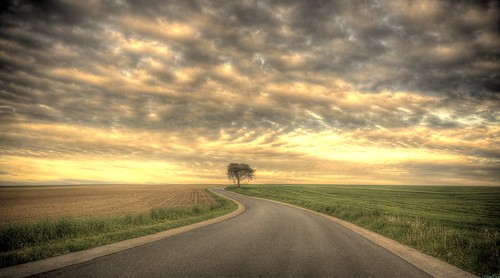 (Image: “.,” by Jeremy Lelievre, on Flickr under Creative Commons.)

Because, by the diabolical magic of social media, on Sunday evening I was treated to pictures of my old ladyfriend — whose hand I had wanted to hold, and who I secretly hoped might one day wish to rekindle the romance we had — with her new fellow.

It wasn’t completely unexpected — I knew she was seeing someone, and had convinced myself that as long as she was happy, I could be happy for her. And, in the main, that’s true — my deepest wish is for her to be happy. But I wasn’t prepared for how much it would hurt to see her happy with someone else. (I recognize that it’s a hurt I earned, by being stupid, and careless, and even a little callous. It may even be a hurt I deserve.) When I was wishing I could hold her hand at that funeral, I had no idea just how far from me she had grown. But then, when I looked at pictures of the two of us on social media, I saw that she had untagged herself from every one. I can’t express how bad I feel, knowing that she must hate me that much. I’m gutted.

I do hope the man she’s with now is good to her, and good for her. I still care for her a great deal, and I will always love her. But this was a very difficult weekend to learn that she no longer cares for me, and is better off with someone else.

Such was this most recent, most wretched weekend of my pathetic life.

4 Responses to I Ran Out of a Funeral, and Then the Weekend Got Worse