I wrote this a couple of months ago, after considering the notion for many more, but there never seemed to be a good time to post it. I thought about posting it when I heard that someone was planning a rally in support of legalizing rape; I’m still not sure if that was a real thing, but it seemed a monumentally stupid idea — what next, rallies to legalize robbery and burglary and other crimes? Then a GOP Presidential hopeful mentioned abortion in the context of self-defense against incest or rape, and was criticized for it, and now another made thoughtless, asinine comments about punishing women who have abortions.

This post is about self-defense, and abortion. I advise you to leave now if you don’t want to be offended, because something I say here will almost certainly offend you — no matter where you stand on these issues. 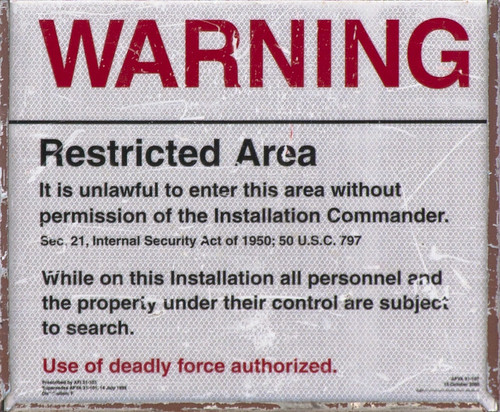 (Image: “Use of Deadly Force Authorized,” by Brian Reynolds, on Flickr under Creative Commons.)

First, an observation: I believe the decision to abort a baby must be one of the most difficult decisions a human being may ever make. I do not intend to second-guess anyone who has made that decision, nor do I intend to criticize or vilify them.

Second, another observation: I recognize that some people believe that I should not express my opinion on abortion (or perhaps even that I should not form an opinion) because I am a man and not a woman. Obviously, I disagree.

Now, to the root of the matter: It seems to me that, regardless of one’s personal views on either issue, logical consistency requires that our view of abortion should align with our view of self-defense, especially where the latter is covered by various “stand your ground” laws. To that end,

I do not think it is necessary to like self-defense killing or abortion, or to be in favor of or advocate either one, in order to recognize that they rest on the same premise: that we have the right to defend our lives and property using force, up to and including deadly force.

Self-defense, after all, is based on the individual’s perception of the threat. The threat may be direct or indirect, and perceptions may be clouded by a variety of factors, but the decision to act or not rests with the person who is threatened at the time the threat presents itself. We may, from a different perspective or at a different time, disagree with the homeowner or the pregnant woman on the degree of the threat; or we may disagree with the decision they made when faced with the threat; but the decision was theirs at that time, not ours at some other time. And to support one and refuse to support the other appears to me to be logically inconsistent.

We can make a similar case about abortion and the death penalty. That is, we can make the case that if the death penalty is a just punishment for certain crimes, enacted after weighing the evidence and coming to a verdict, then abortion may be considered as a death penalty in itself, with the potential mother as judge and jury, possibly as both prosecution and defense, and in some tragic cases even as executioner. For me, that is a much more difficult concept (and following it too closely may lead to considering abortion as a form of justifiable homicide), but I still can consider it somewhat equivalent.

I say “somewhat equivalent” deliberately: I do not mean to say that killing in self-defense is exactly equivalent to abortion, only that they are similar. (Others have tackled that subject in far more depth than I can here, as noted at the end.) One case is more often a quick-reaction response compared to the other. One is more often a direct confrontation than the other. One clearly involves acting against an agent capable of independent thought and action. On that score, advocates of abortion often argue that the unborn child, by virtue of being fully dependent on the mother, should not be considered fully human; rather than argue that matter here, except to note that such a dehumanizing mentality is something pro-abortion advocates have in common with armies facing enemies, it seems clear that an unborn child at the very least has the potential to grow into an independent agent (as the pregnant woman was considered above a potential mother). On that basis, we can say that both self-defense killing and abortion involve terminating with prejudice the future potential of a human person.

Again I must emphasize that it is not necessary to prefer or to approve of either of these mechanisms. It is possible to wish for every unborn child to be wanted and to be cared for, in utero and beyond, just as it is possible to wish that there might be no thugs, no rapists, no burglars, no threats against people’s lives, persons, or property. Wishing for these things, however, does not make them come to pass, and so we are faced with difficult decisions that have far-reaching consequences.

Therefore, as someone who supports the right of an individual to protect their person and property with any means at their disposal, up to and including deadly force — whether homeowners defending themselves against burglars or women defending themselves against rapists — I must support the right of any woman to protect herself against an unborn life she is supporting if she feels threatened by it, up to and including the use of deadly force. Ladies, stand your ground.

I do not have to like it. I may wish for any number of alternatives. But it seems to me that I cannot support one and not the other without being logically inconsistent.

I could be wrong.

___
Some Notes:
1. The first GOP contender alluded to above was Chris Christie. See Chris Christie Faces Criticism for Saying Aborting a Baby After Rape is “Self-Defense” for Women. The second was Donald Trump, in his more recent MSNBC interview that, as much as it presented his egregious thinking on the subject, lent credence to the idea that he thinks very little of Republicans and is merely playing at being one.
2. The idea of abortion as self-defense was discussed in 1971 by Judith Jarvis Thomson in her article “A Defense of Abortion” in Philosophy & Public Affairs. She wrote, “I should perhaps stop to say explicitly that I am not claiming that people have a right to do anything whatever to save their lives. I think, rather, that there are drastic limits to the right of self-defense…. But the case under consideration here is very different. In our case there are only two people involved, one whose life is threatened, and one who threatens it. Both are innocent: the one who is threatened is not threatened because of any fault, the one who threatens does not threaten because of any fault. For this reason we may feel that we bystanders cannot interfere. But the person threatened can. In sum, a woman surely can defend her life against the threat to it posed by the unborn child, even if doing so involves its death.” The entire article is online here and elsewhere.
3. This short BBC article also covers the topic of abortion as self-defense.
4. A Harvard Law blogger asked in a 2012 entry, Is the Self Defense Exception Consistent with the Belief that a Fetus is a Person? Their conclusion was that “the belief that a fetus is a person with the full complement of rights leads to uncomfortable positions in relation the self-defense exception.” Indeed.
5. The tendency of armies to dehumanize the enemy, in order to make it easier to kill them, was covered quite well by Robert O’Connell in Of Arms and Men.

4 Responses to Ladies, Stand Your Ground