Fifty years ago today — May 15, 1963 — L. Gordon Cooper, Jr., launched from Cape Canaveral on the final manned mission of the Mercury program. Riding the “Faith 7” capsule for mission Mercury/Atlas-9, Cooper became the first US astronaut to spend more than 24 hours in space. This mission was also the first US spaceflight to include a live TV broadcast.

Because of a suspected malfunction in the automatic reentry system, Cooper also became the first astronaut to use only the manual reentry mode. He initiated reentry after 22 orbits, and splashed down safely in the Pacific Ocean near Midway Island after spending about 34 hours in orbit.

Fifty years ago today — October 3, 1962 — Wally M. Schirra blasted off from Cape Canaveral on the third manned orbital* mission of the Mercury program. The Mercury/Atlas 8 mission consisted of six orbits around the Earth. The spacecraft, named “Sigma 7,” had been modified based on feedback from the first two manned missions, including upgrading the control system to allow finer manual control by the astronaut via low-thrust jets, and installing additional antennas to improve communications. The October 3rd launch was the first to be relayed by satellite to the European audience.

Schirra and Sigma 7 splashed down in the Pacific Ocean a little over 9 hours after liftoff, completing what Schirra called a “textbook flight.”

___
*The first two flights were sub-orbital. (H/T to David O’Nan for pointing out my error in the original post – GR) MA-4 was the first orbital test flight of the Mercury program; the previous flights had all been sub-orbital.

The payload consisted of a pilot simulator (to test the environmental controls), two voice tapes (to check the tracking network), a life support system, three cameras, and instrumentation to monitor levels of noise, vibration and radiation. It demonstrated the ability of the Atlas rocket to lift the Mercury capsule into orbit, of the capsule and its systems to operate completely autonomously, and succeeded in obtaining pictures of the Earth.

After one orbit, the capsule splashed down east of Bermuda, where it was recovered for examination.

In other blog posts, I’ve catalogued the Space Shuttle landings I worked as part of the AF Flight Test Center team at Edwards AFB — I worked four landings, and saw quite a few more — and with that experience in mind I watched with proud sorrow the shuttle Atlantis glide in for its landing this morning at the Kennedy Space Center.

When the shuttle era began, we had high hopes for it, and though it was exciting to be even a small part of it the program never lived up to our expectations. But as we close the books on this phase of the U.S. space program, and especially as we look forward with hopeful anticipation to some new phase, let’s not forget to look back as well to the pioneers who braved the hazards of the earliest days of space exploration.

Because 50 years ago today — July 21, 1961 — Virgil I. “Gus” Grissom became the second U.S. man in space. His Liberty Bell 7 capsule launched into a suborbital trajectory atop a Redstone rocket, in a mission appropriately labeled Mercury-Redstone-4. 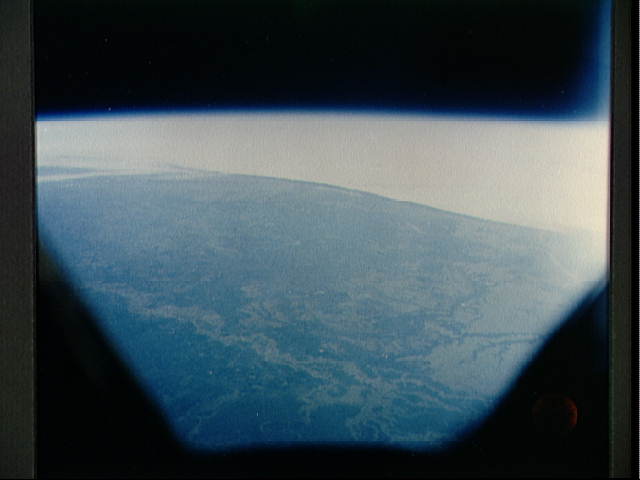 The MR-4 capsule differed from Alan Shepard’s “Freedom-7” capsule in that it had an enlarged window and a new type of hatch:

The explosively actuated side hatch was used for the first time on the MR-4 flight. The mechanically operated side hatch on the MR-3 spacecraft was in the same location and of the same size but was considerably heavier (69 pounds rather than 23 pounds). The explosively actuated hatch utilizes an explosive charge to fracture the attaching bolts and thus separate the hatch from the spacecraft. Seventy 1/4-inch titanium bolts secure the hatch to the doorsill. A 0.06-inch diameter hole is drilled in each bolt to provide a weak point. A mild detonating fuse (MDF) is installed in a channel between an inner and outer seal around the periphery of the hatch. When the MDF is ignited, the resulting gas pressure between the inner and outer seal causes the bolts to fail in tension. The MDF is ignited by a manually operated igniter that requires an actuation force of around 5 pounds, after the removal of a safety pin. The igniter can be operated externally by an attached lanyard, in which case a force of at least 40 pounds is required in order to shear the safety pin.

However, “After splash-down, the explosive hatch activated prematurely while Grissom awaited helicopter pickup.” The capsule sank, but was ultimately recovered from its 15,000-foot-deep resting place.

Liberty Bell 7 was finally raised from its resting place on the bottom of the Atlantic Ocean, some 4.8 km below the surface and 830 km northwest of Grand Grand Turk Island, in 1999 after a number of expeditions. Two expeditions to the area, in 1992 and 1993, were unsuccessful in locating the capsule. The next expedition succeeded in locating the capsule on May 2, 1999, but the cable which linked the surface ship to the submersible (which would have towed the capsule to the surface) broke, resulting in the loss of the submersible and temporarily dashing the hopes of those who intended to retrieve a piece of history. A final expedition, to recover both the submersible and the capsule, succeeded on July 20, 1999, in raising the capsule to the surface. Still attached to the capsule was the recovery line from the helicopter which tried to save it from going under in 1961. Also among the artifacts found inside were some of Grissom’s gear and some Mercury dimes which had been taken into space as souvenirs.

Grissom, about whom you can read more in this expanded NASA biography, traveled into space once more, as commander of the first Gemini mission, and died in the Apollo-1 launch pad fire.

It seems somehow poignant for the last Space Shuttle to return to earth on the 50th anniversary of the first spaceflight of one of our country’s space pioneers.

May the time come soon when the U.S. once again launches our brave pioneers into orbit … and beyond.

Shepard had named his capsule Freedom-7, though the flight was also known as Mercury Redstone-3.* The mission had several objectives:

(1) familiarize man with a brief but complete space flight experience, including the lift-off, powered flight, weightless flight (approximately 5 minutes), re-entry, and landing phases of the flight;
(2) evaluate man’s ability to perform as a functional unit during space flight by demonstrating manual control of spacecraft attitude before, during, and after retrofire and by use of voice communications during flight;
(3) study man’s physiological reactions during space flight; and,
(4) recover the astronaut and spacecraft.

Shepard’s launch from the Eastern Space & Missile Center was only 23 days after Yuri Gagarin had become the first human in orbit. Shepard’s flight was suborbital, however, so the honor of being the first U.S. astronaut in orbit would eventually go to John Glenn.

___
*Speaking of Redstone rockets, why not pop over to Redstone Science Fiction and see what they have to offer? They recently posted their twelfth issue! Launched, of course, on an Atlas rocket, Mercury Atlas-2 flew a suborbital test profile “designed to provide the most severe reentry heating conditions which could be encountered during an emergency abort during an orbital flight attempt.” This was a precursor, of course, to the first U.S. human spaceflight, which would take place about two months later.

Thirty-five years later, human spaceflight had become nearly routine. For example, on this date in 1996, the Russians launched Soyuz TM-23 from the Baikonur Cosmodrome on the 25th expedition to the Mir space station. Cosmonauts Yuri Onufrienko and Yuri Usachev docked with the station on the 23rd.

And, for a little bonus space history: 30 years ago today — February 21, 1981 — the Japanese launched the Hinotori to study solar flares. It rode atop an M-3S launch vehicle from the Uchinoura Space Center.

Fifty years ago today — December 19, 1960 — the first Mercury-Redstone capsule was sent into space. MR-1A was a suborbital flight from Cape Canaveral, designated “1A” because MR-1 had failed its launch attempt in November. This flight was intended to qualify the systems for eventual orbital flights, and it achieved all the mission objectives.

This particular launch — and especially the name of that launch vehicle — presents a good opportunity for a plug for Redstone Science Fiction, the new online magazine that published my story, “Memorial at Copernicus.” Shameless, I know … but I can live with that.

This was also its closest flyby, passing within 327 km (203 mi) of the planet. On this flyby, Mariner-10 discovered that Mercury has an intrinsic magnetic field.

Mariner-10 was the first spacecraft to visit two planets, and the first to use a gravity-assist maneuver in a “slingshot” around Venus to reach Mercury. The mission succeeded despite some difficulties, however. One problem the mission encountered was of special interest to spacecraft designers in the future:

A trajectory correction maneuver was made 10 days after launch. Immediately following this manuever the star-tracker locked onto a bright flake of paint which had come off the spacecraft and lost lock on the guide star Canopus. An automated safety protocol recovered Canopus, but the problem of flaking paint recurred throughout the mission.

Another first for the mission occurred when an attitude control problem used up excessive propellant. Mission planners devised a never-before-used procedure to “use … solar wind on the solar panels to orient the spacecraft.”

Since 1975, when the last of its attitude control propellant was used up, Mariner-10 has remained in orbit around the sun.