A Term Limit (and More) Amendment

Over a decade ago I wrote a blog series entitled, “If I Were My Own Representative,” in which I laid out little tidbits about how I would comport myself if I were ever elected to the House of Representatives. (For folks familiar with my music, this actually predated “I Think I’ll Run for Congress”.) The first post of the series started this way:

Funny that I wrote some of that into the song a year or so later. Anyway, links to all five parts of the series are at the bottom, and this post could be considered an adjunct or perhaps even an additional installment.

For as long as I can remember, I have advocated that Representatives, Senators, and the President all be limited to twelve years in office, because twelve is the lowest number that each term length divides into. I’ve only shared that opinion with a few of my friends, because who cares what I think? But if I were elected to office, my opinion on the subject might carry more weight. So, if I were my own Representative, as one of my first acts I would propose the following Amendment to the United States Constitution:

1. The limit of continuous service in any Federal elective office shall be twelve (12) years.

There you see the “and more” part promised in the title. I’ve never heard anyone else advocate something like that second clause, but I think it’s important because it would restrict an office-holder from simply sitting out a single term and then trying to be elected again. The longer they stay out of office–whether they go back into the private sector (which I think would be preferable) or go to another position in government–the weaker the strings that they might pull, or that might pull on them, may get. 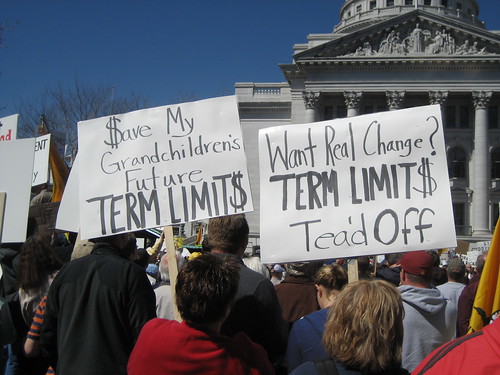 Note that, as written, this amendment would not prevent someone from serving a few terms in one office and then standing for election to a different office. I don’t think we need to narrow the corridor of service (or possible advancement) too much.

But, as with most of my musings, this is only a thought exercise. Unless, that is, someone wants to manage a campaign for me to become my own Representative [hint, hint]. It’s not as if I haven’t said that “I Think I’ll Run for Congress”!

As always, comments are welcome — and if you like the idea, feel free to share it with your friends … or even your Representative!