What Would C.S. Lewis Think of WALKING ON THE SEA OF CLOUDS? (Part 2)

(I originally wrote this as an item in the Lorehaven Book Club Facebook group. Part one is found here.)

As I noted in part one, I recently re-read C.S. Lewis’s essay, “On Science Fiction,” in which he divided the field into a number of what he called “sub-species” and examined them in some depth. Last time I pointed out that my near-future science fiction novel Walking on the Sea of Clouds seems to fit into a couple of his categories. Unfortunately, Lewis asserts (referring specifically to H.G. Wells’s First Men in the Moon) that

The more plausible [the scientific basis of the story], the worse. That would merely invite interest in actual possibilities of reaching the Moon, an interest foreign to [Wells’s] story. Never mind how they got there; we are imagining what it would be like.

Since I tried hard to keep the science plausible in my story — taking a few liberties here and there, I admit — Lewis would apparently think that I had labored in vain. And it seems he would think the same with regard to my effort to build in believable characterization (emphasis added):

It is absurd to condemn [these stories] because they do not often display any deep or sensitive characterization. They oughtn’t to. It is a fault if they do…. Every good writer knows that the more unusual the scenes and events of his stories are, the slighter, the more ordinary, the more typical his persons should be. Hence Gulliver is a commonplace little man and Alice a commonplace little girl. If they had been more remarkable they would have wrecked their books.

In my defense, I’d say that the characters in my book are rather ordinary compared to today’s astronauts, many of whom have multiple advanced degrees and generally stellar credentials. But even if my characters themselves aren’t exactly commonplace, I tried to focus on the commonplace nature of their tasks: building things, repairing things, keeping things going.

To tell how odd things struck odd people is to have an oddity too much: he who is to see strange sights must not himself be strange. He ought to be as nearly as possible Everyman or Anyman. Of course, we must not confuse slight or typical characterization with impossible or unconvincing characterization. Falsification of character will always spoil a story.

And there, I think I may have redeemed myself in Lewis’s eye. (At least, it would be nice if that were the case!)

I was, additionally, interested in another note that Lewis includes. Referring to the “novel of manners” (which Britannica.com defines as one that “re-creates a social world” and conveys “finely detailed observation of the customs, values, and mores of a highly developed and complex society”), Lewis writes — again with emphasis added:

And, so far as I can tell, spaceflight — and the possibility of extending our reach to the Moon and beyond — definitely stirs the imagination and passion of at least some people! (Now, if more of them would find their way to my story, that would be great….) 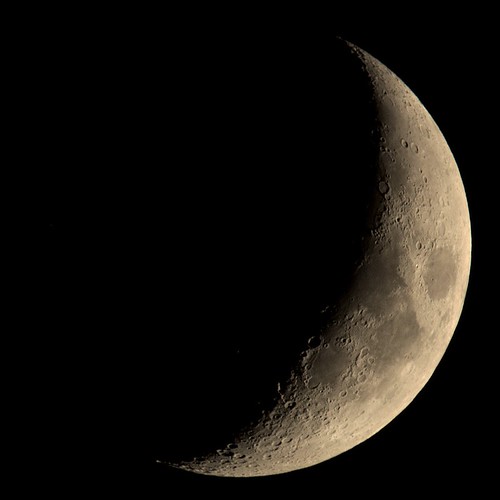 (Image: “Crescent Moon,” by kloniwotski, on Flickr under Creative Commons.)

Finally (for my purpose here), before delving into other sub-species of science fiction that would not include my novel, Lewis warns,

… while I think this sort of science fiction legitimate, and capable of great virtues, it is not a kind which can endure copious production. It is only the first visit to the Moon or to Mars that is, for this purpose, any good. After each has been discovered in one or two stories (and turned out to be different in each) it becomes difficult to suspend our disbelief in favor of subsequent stories. However good they were they would kill each other by becoming numerous.

I wonder if the people who have asked me for a sequel would take that as an excuse for me not to do so.

Anyway, what do you think of all that? Is Lewis on to something?

2 Responses to What Would C.S. Lewis Think of WALKING ON THE SEA OF CLOUDS? (Part 2)