What Would C.S. Lewis Think of WALKING ON THE SEA OF CLOUDS? (Part 1)

(I originally wrote this as an item in the Lorehaven Book Club Facebook group.)

Have you read C.S. Lewis’s essay, “On Science Fiction”?

He divided the field into a number of “sub-species,” as he put it, and I think Walking on the Sea of Clouds would fit into a couple of them — though he admits that he wouldn’t have been in the audience for it.

My novel doesn’t fit into the first sub-species that Lewis identified, wherein

the author leaps forward into an imagined future when planetary, sidereal, or even galactic travel has become common. Against this huge backdrop he then proceeds to develop an ordinary love-story, spy-story, wreck-story, or crime-story.

Lewis didn’t think very highly of that kind of science fiction, and presumably would bemoan its popularity. (And it is quite popular! If I could think of a good story like that, I’d surely write it.) Anyway, he then wrote (emphasis added),

Having condemned that sub-species, I am glad to turn to another which I believe to be legitimate, though I have not the slightest taste for it myself, [which] might be called the fiction of Engineers. It is written by people who are primarily interested in space-travel, or in other undiscovered techniques, as real possibilities in the actual universe. They give us in imaginative form their guesses as to how the thing might be done….

That seems to describe my near-future technological drama, does it not? 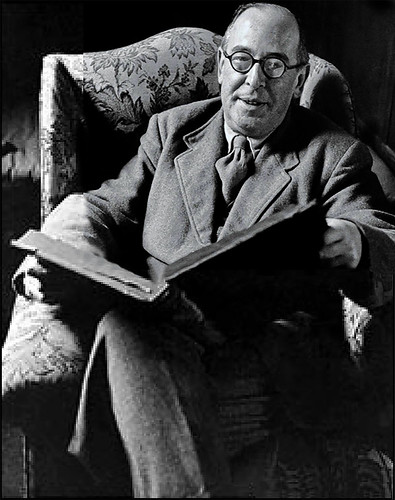 I am too uneducated scientifically to criticize such stories on the mechanical side; and I am so completely out of sympathy with the projects they anticipate that I am incapable of criticizing them as stories…. But heaven forbid that I should regard the limitations of my sympathy as anything save a red light which warns me not to criticize at all. For all I know, these may be very good stories in their own kind.

That’s why I think Lewis just wouldn’t be in the audience for my story. And that’s okay! Every story isn’t for everyone. But he goes on (emphasis added):

I think it useful to distinguish from these Engineers’ Stories a third sub-species where the interest is, in a sense, scientific, but speculative. When we learn from the sciences the probable nature of places or conditions which no human being has experienced, there is, in normal men, an impulse to attempt to imagine them. Is any man such a dull clod that he can look at the Moon through a good telescope without asking himself what it would be like to walk among those mountains under that black, crowded sky?

Ahem — Walking on the Sea of Clouds, anyone? It sure seems to fit that description.

But what do you think?