First off, thanks to everybody who commented on the space history quasi-series, whether here, on Twitter, or on Facebook. (I got no LinkedIn comments, but it isn’t quite as convenient for communicating.) I appreciate the feedback!

A half-century ago today (which is hard to write because I’m getting closer to that age every day) — January 21, 1960 — NASA launched the Little Joe 1B test vehicle from Wallops Island, VA.

Like the Little Joe 2 launch a few weeks before,* which I blogged about here, this test of the Mercury abort system carried a rhesus monkey. In this case, the passenger was “Miss Sam,” the mate of “Sam” who had flown on the previous launch. (“Miss Sam” in her protective couch, prior to the Little Joe 1B launch. NASA image from Wikimedia Commons.)

“Miss Sam”‘s launch only placed her about 9 miles in altitude, however, so she did not earn her astronaut wings.

For a fascinating history of animals (especially monkeys!) in space, check out this NASA page.

___
*The Little Joe launches were not in numerical order, for some reason.

Sam reached an altitude of over 50 miles and traveled nearly 200 miles downrange before landing in the Atlantic Ocean. The US Navy recovered Sam and the boilerplate Mercury capsule; here’s a link to a post-flight photo of Sam.

Fifty years ago today — October 4, 1959 — the first probe to return pictures of the far side (not the “dark side”) of the moon was launched. The Luna-3 flyby mission launched on a Vostok rocket from what is now the Baikonur Cosmodrome.

(Luna-3’s first image of the far side of the moon. From the National Space Science Data Center.)

On the same day, the U.S. launched “Little Joe 6,” from Wallops Island, Virginia, to test the Mercury space capsule’s integrity and aerodynamics. The capsule reached 37 miles altitude and flew 79 miles downrange, and the mission was listed as “partially successful.”

The space race was on, a half century ago. Thinking about it makes me wonder if we have the national will to start running a space race again, with the Chinese and the Indians in the mix.

Thirty-five years ago today — September 21, 1974 — Mariner-10 made its second flyby of the planet Mercury.

Mariner-10 was the first spacecraft to examine Mercury up close. Today the MESSENGER (MErcury Surface, Space ENvironment, GEochemistry, and Ranging) spacecraft is studying Mercury, and its next flyby is scheduled for next week. Read more about MESSENGER here and here.

Fifty years ago today — September 9, 1959 — the Mercury capsule test “Big Joe 1” launched from Cape Canaveral on an Atlas rocket. The booster operated nominally but its two outboard engines didn’t separate as planned, which left the payload 500 miles short of the predicted impact point; the overall test flight was still considered a success. 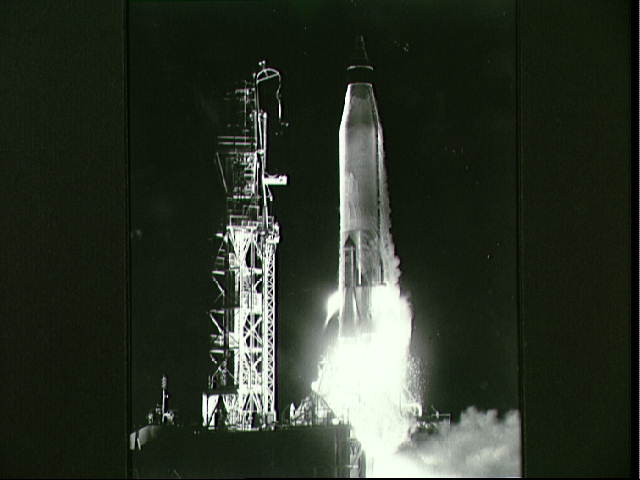 The STS-64 mission was the first flight of the LIDAR (i.e., light detection and ranging, like radar but with lasers instead of radio) In-Space Technology Experiment, or “LITE.” Astronauts Lee and Meade accomplished the first untethered U.S. space walk in 10 years.

___
*From which I get the space anniversaries I want to highlight here on the blog.

An obscure tidbit from the space anniversary files: on November 26, 1958, the Project Mercury designation was officially approved. Project Mercury went on to place our first U.S. astronauts in space and in orbit, and paved the way for Gemini and then, of course, Apollo.

You can read more about Project Mercury at this Kennedy Space Center web page.

Just last month the MESSENGER spacecraft sent back vivid images that revealed parts of Mercury never seen before. With that in mind, it seems fitting to remember its predecessor today.