The contract is in the mail, so I can announce that my novelette “What is a Warrior Without His Wounds?” is slated to appear in the July 2013 issue of Asimov’s Science Fiction Magazine.

This will be my third story to appear in Asimov’s. I should receive the galleys in a few weeks.

In other news, “award season” is upon us again. Members of the Science Fiction and Fantasy Writers of America are in the process of nominating works for the Nebula Awards, while members of the World Science Fiction Convention (last year’s or this year’s, see below for more info) are in the process of nominating for the Hugo Awards. In comparison to more widely-known awards, the Nebulas are like unto the Academy Awards, while the Hugos are closer in character to the People’s Choice Awards.*

By virtue of 2012 being my most successful publishing year ever, I have four eligible stories: two short stories (“Sensitive, Compartmented,” Asimov’s, April/May 2012, which was listed [with 1 of a possible 3 stars] on Tangent Online’s Recommended Reading List for 2012, and “The Song of Uullioll,” Analog, July/August 2012) and two novelettes (“The Second Engineer,” Asimov’s, October/November 2012, and “SEAGULLs, Jack-o-Lanterns, and Interstitial Spaces,” Analog, November 2012). If you’re eligible to nominate and you didn’t catch one of these stories in the magazine, write me a note — by comment, or by e-mail or Facebook or Twitter — and I’ll send you the story to consider.

___
*Regarding the People’s Choice-type award, if you want to nominate and vote for the Hugo Awards, you can purchase a “supporting membership” to the convention for $60. The price gets you electronic copies of the nominated works, plus portfolios of artwork from the nominated artists, all of which adds up to more than the price of the membership. To nominate, though, you must join the convention before the end of January.

I try not to overdo the shameless plugs, but the opening of my story in the November issue of Analog Science Fiction & Fact — “SEAGULLs, Jack-o-Lanterns, and Interstitial Spaces” — has been posted on the Analog web site.

You can read the opening of “SEAGULLs” by clicking through from this link.

You can also see the entire table of contents by clicking here. On that page you’ll also find these kind words of introduction from editor Stanley Schmidt,

We always have a bit of a dilemma about where to put seasonal material: in the issue named for the month in which a holiday or other event occurs, or the one that actually appears closest to that date? Our November issue contains at least one item that could be construed as Halloween related, from its title, “SEAGULLs, Jack-O-Lanterns, and Interstitial Spaces.” And that holiday does in fact play a role in it, though not, as author Gray Rinehart points out, as much as the title suggests. Set in a space station, it’s a quintessential Analog story in which an intriguing technical problem and the lives of the people who must deal with it are inextricably entwined—and I’ll bet you can’t guess what the SEAGULLs and jack-o-lanterns really are!

Of course, I hope you’ll buy a copy of the magazine … along with the October-November issue of Asimov’s Science Fiction, which includes my story “The Second Engineer.”

Yes, that really is my name on the cover of the November issue of Analog Science Fiction & Fact, which goes on sale next week.

And yes, I am still stunned every time I look at it:

It seems so strange, seeing my name there. I am honored, and humbled, and overwhelmed.

My novelette, “SEAGULLs, Jack-o-Lanterns, and Interstitial Spaces,” began as my entry in the Codex Writers Group Halloween contest. The story prompt was a set of quotes from five different sources, following a meme that had been making the rounds during National Book Week of selecting certain lines from specified pages of nearby books. Just to be obstinate, I used each of the sources in some way, even if only a phrase or a name.

Finally, yes, I am also stunned because the story has a fetching illustration by Vincent Di Fate, one of the all-time-great SF&F artists. Last year he was inducted into the Science Fiction Hall of Fame, which is part of the EMP Museum in Seattle.

The whole table of contents is listed in this SFScope post.

I’ve had my copy for a couple of weeks, but the new issue of Analog Science Fiction & Fact that includes my short story, “The Song of Uullioll,” should be available on newsstands soon. (So to speak; I don’t suppose there are many actual newsstands anymore.)

Yesterday the good folks over at SF Scope posted the table of contents for the issue.

May Day was very good to me! For the first time in my writing career, I received two short story contracts on the same day.

The contracts are signed and will shortly be in the mail, so I feel as if it’s safe to broadcast the details.

After a minor rewrite a couple of weeks ago, Asimov’s Science Fiction Magazine accepted my novelette “The Second Engineer.” I posted news of the story acceptance on Facebook, but didn’t identify the magazine because I didn’t want to get ahead of the paperwork. So yesterday the contract showed up in my e-mail …

… along with a contract from Analog Science Fiction & Fact for my novelette “SEAGULLs, Jack-o-Lanterns, and Interstitial Spaces.”

So on the same day I got contracts for my second story for Asimov’s and my third story for Analog. My head is still spinning.

On a Related Subject: My short story “The Song of Uullioll” is in the July/August issue of Analog Science Fiction & Fact, which has been mailed to subscribers and should be on newsstands soon. (I’ll post the cover when I get the image file for my web site.)

P.S. I understand “The Second Engineer” is scheduled to appear in the October/November issue of Asimov’s. GWR Hey, blogosphere and Facebook folks: YOU can help me fulfill my solemn duty to the Science Fiction & Fantasy Writers of America!

It’s “award season,” and this will be the first time I’m able to nominate and vote for the Nebula Awards.

I’m pretty excited about being able to take part in the Nebula voting: It feels good to be able to participate in this professional ritual. Plus, my writing friends Eric James Stone and Rachel Swirsky won Nebulas last year, and I’ve enjoyed several of the award-winning novels of recent years.

Problem is, I don’t get to do a lot of reading for pleasure. I’ve collected together all of my 2011 issues of Analog, Asimov’s, Bull Spec, Realms of Fantasy, etc., to go through them, but I’m also looking for suggestions. What else should I read, in hopes that I’ll enjoy it enough to nominate it?

Some of my writing friends have sent me their eligible work,* but if you read — or wrote — a novel or story that was published this year that you think I should consider, let me know about it!

I have until mid-February to submit my nominations, but the sooner I get suggestions the more time I’ll have to read the stories.

And if you haven’t read any good books or good stories lately, WHY NOT?

___
*And a few of them are also kindly reading my eligible novelette: “Therapeutic Mathematics and the Physics of Curve Balls,” from the September Analog.

I’m very pleased to announce that I’ve signed the contract for my second sale to Analog Science Fiction & Fact. My story, “The Song of Uullioll,” should appear, I think, in the first half of 2012.

It was surreal when my first Analog story was published this past year. It’s even more surreal that I have stories slated for publication next year in the two biggest science fiction magazines, Analog and Asimov’s Science Fiction.

This is a nice dream I’m living.

In other (non-space-history) news, yesterday my speechwriting teacher Joan Detz kindly blogged about my story in Analog. Thanks, Joan!

My friends with more stories in print than I have many different perspectives on reviews. Some avoid anything that smacks of a review, others read every review and pay them greater or lesser amounts of heed, and some study the reviews — good or bad — to see what lessons they can learn from them to improve their craft.

I would like to take that final approach, but only time (and hopefully some future publications) will tell. But with that as an aim, at least, I’ve read a few reviews of “Therapeutic Mathematics and the Physics of Curve Balls,” my story in the September issue of Analog.

Does Joey run after the scientist or return to the freak show and protect his only friends? It’s an agonizing choice.

This SF/F story takes place in the early 1940s, right about the time J. Robert Oppenheimer’s involvement in the Manhattan Project succeeded in changing the world forever. Who, other than Gray Rinehart ever imagined solving the final equation was due to the genius and youngest member of Fineas Ferguson’s Fabulous Freakshow on his one, lonely, stolen day?

To balance the scale, the eminent Lois Tilton at Locus posted a neutral review a few weeks ago:

An interesting enough situation, but weak on resolution, offering one of those ambiguous endings that don’t quite tell us what the character has chosen and definitely not what will come of his choice. There are some rather tantalizing hints of WWII secrets, but nothing comes of them.

To some people that might come across as negative, but the fact that she thought the story situation was interesting and that I served up “tantalizing hints” of more is, to my way of thinking, pretty good.

Elsewhere on the web, SFRevu’s Sam Tomaino called the story “a nicely told tale with a good sense of the time in which it was taking place,” and British reviewer John Fairhurst said it was “a rather nice tale with the bleakness of Joey’s life in the show being counterpointed by flashbacks to his life with his father” and “eventually, an uplifting tale.”

All the reviews aren’t in, of course, and doubtless some readers will not have enjoyed the story at all. I’m pleased that anyone enjoyed it, but most especially that Dr. Schmidt enjoyed it enough to publish it!

This goes to show, I think, that every story is not for every reader. Still, I appreciate the work the reviewers do month in and month out — living deep in the slush pile as I do, I do NOT envy them their task — and I hope to use the comments, good or bad, to make my next stories even better.

And in the end I can always reflect on the fact that this issue had a FANTASTIC cover: 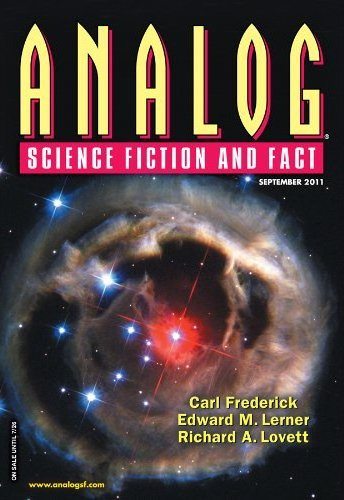