Refining My Position on Just About Everything: Don’t Punish Good Folks When Bad Things Happen

Often it seems to me that many of our laws — and quite a bit of the heated rhetoric I read and hear — derive from a tendency to try to correct or prevent bad things by punishing everyone, including those who aren’t responsible for the bad things. I’m against this. 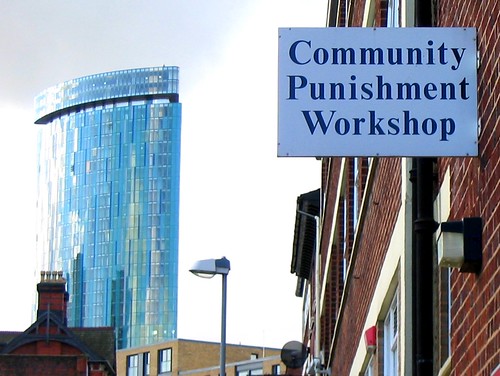 (“Community Punishment Workshop,” by amortize, on Flickr under Creative Commons.)

I first thought about this when I was writing my “If I Were My Own Representative” series, one of which was Part IV: My Touchstone for Voting:

I’m coming to believe this in more general terms than just politics: i.e., that in general we shouldn’t blame or punish good people when other people do bad things or allow them to happen. Let me lay out a few assumptions upon which I base this position:

I don’t expect anyone particularly to agree with me on this (or anything else, for that matter), but that’s the way I’m approaching things right now.

___
*I offer this optional way of characterizing it for those for whom the doctrine of Original Sin, or Jesus’s “no one is good but God” statement (Matthew 19:17, Mark 10:18, Luke 18:19),prevents them from admitting that there may be good people in the world.

2 Responses to Refining My Position on Just About Everything: Don’t Punish Good Folks When Bad Things Happen