(Third in a series.)

With the ongoing governmental brouhaha over whether a fence or a wall is better for securing a border, it occurred to me that immigrants are like salt.

For context, in the initial post of this series I wrote,

A little bit of salt enhances a dish. Too much salt ruins a dish: It no longer tastes like the dish it was meant to be; it only tastes like salt. When it comes to salt, moderation makes it more effective and saturation makes it unpalatable.

Metaphorically, the dish is culture. The dish is social solidarity. The dish is commonality in terms of language, values, beliefs. Immigrants, like salt, improve the dish by enhancing its starting flavor — whether it’s a local delicacy, a regional specialty, or a national favorite — when applied in moderate amounts. 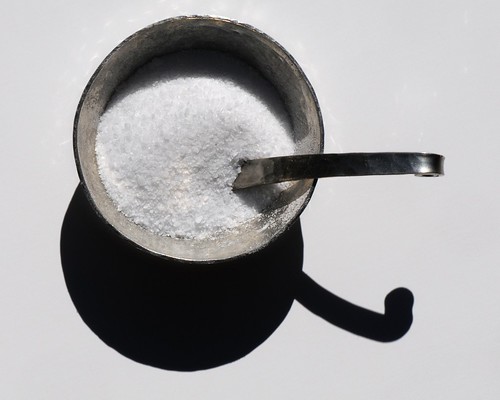 Sprinkle the salt with the spoon, or even with your fingers; don’t pour out the whole bowl into the dish you’re about to eat. (Image: “salt,” by theilr, on Flickr under Creative Commons.)

Extending the metaphor: In the same way that salt is not automatically bad, unless you’ve got a condition which salt may exacerbate, immigrants are not automatically bad. Limiting salt does not mean never using it, it means using it sparingly, in the right amount to make the best dish. So, too, with immigration.

Limiting immigration is meant to keep from ruining the societal dish. Or, to borrow a phrase, to keep from turning the “melting pot” into an unappetizing mess.

If only the chefs in the governmental kitchen had discerning palates, and could agree on the menu.