Whatever Happened to ‘Women and Children First’?

I understand that, in the interest of enforced equality, a judge with an unfortunate first name has ruled that selective service registration is unconstitutional if it applies only to men. The reasoning is that since we now allow women to operate in combat roles, we should require women to register for the draft, and if we don’t register women then we should not be able to register men for the draft.

This has been billed as an “equality” thing, but that’s garbage. Equality of opportunity is not the same as equality of responsibility or requirement. It’s one thing to have opened up combat roles to women who have the ability to fill them (both the physical attributes and the requisite viciousness), but it’s another thing entirely to require women who would never willingly choose such roles to have to sign up for them.

Imagine the difficulty of training drafted women — conscripted, non-volunteer women — for combat roles. But that in and of itself is not my primary concern. Nor is my concern that the proportion of women who can effectively fill combat roles — by dint of either physicality or temperament — is likely a good deal lower than the proportion of men who can do so.

My concern is what forcing women into combat, into life-threatening danger, when there are capable men who could serve in that capacity, may mean for our society.

Used to be, if a ship was sinking and the passengers were directed to lifeboats, women and children would be given the first spots. Any man who took a seat when there were still women and children waiting to board would open himself to general condemnation and charges of cowardice. Given the state of our society these days, I’m not sure that holds true anymore — especially since the court case that resulted in the ruling mentioned above “was brought by the National Coalition for Men, a men’s rights group, and two men who argued an all-male draft was unfair.”

Boo-freaking-hoo. Life’s unfair, cupcakes. If this is representative of their approach to life, that group may as well be named the national coalition for poltroons.

Thank God I still know people other than myself who believe, like Robert A. Heinlein, that

All societies are based on rules to protect pregnant women and young children. All else is surplusage, excrescence, adornment, luxury, or folly which can — and must — be dumped in emergency to preserve this prime function. As racial survival is the only universal morality, no other basic is possible. Attempts to formulate a “perfect society” on any foundation other than “Women and children first!” is not only witless, it is automatically genocidal.

Unfortunately, some people these days seem as if they would welcome genocide. A philosophy professor from my own alma mater not long ago published an op-ed in which he pondered the question of human extinction — and whether it would be all that bad for our race to go extinct since we’ve been so bad for the planet. I confess that I’m selfish enough to say that genocide and human extinction would be bad for me and the people I care about, so I’m not in favor. 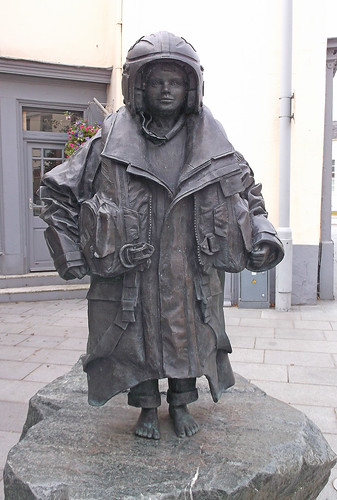 The sculpture, “When I Grow Up” by Darren Jackson, depicts a boy who wants to save lives — a noble calling, and one in which “women and children first” remains an important consideration. (Image: “RNLI Statue,” by Phil Parker, on Flickr under Creative Commons.)

Along less drastic lines, I’ve heard plenty of people declare in triumphant tones that “chivalry is dead,” because after all wasn’t it just a tool of the nebulous but hated patriarchy, meant to keep women in their place? Notwithstanding that any good thing can be misused, modern chivalry couldn’t possibly be an indicator of how highly men value women, and the lengths to which men would go to protect women and ensure their safety, security, and comfort — could it? It certainly couldn’t be an unconscious (but in the end perhaps effective) instinct to preserve the race, could it?

Some people have gone so far as to point out that modern chivalry bears little resemblance to the medieval codes governing knightly combat, and so, even if it’s not exactly dead, it should be. How utterly barbarous. Remove that muzzle very carefully, zookeeper: the bear has teeth, even if you’ve filed down his claws.

Perhaps this historic period of peace and plenty has something to do with these new societal mores. We are not in extremis, so as a culture maybe we have the luxury of devaluing those people among us who are most precious. The emergency will come, however — emergencies always do, and most of us are caught unawares — and holding to these modern sensibilities in the confusion and chaos may spell our societal doom. Not only witless, as Heinlein said, but genocidal. Or, to coin a phrase, genosuicidal.

I hope I’m right that most people, deep down, are fully in favor of “women and children first” — even if they won’t admit it. I certainly am. And I think (and hope) most people would still look askance at any man who intentionally saved his own life knowing that in doing so he was placing his wife or child, or any woman or child, in jeopardy.

But, “call me a relic,” as Bob Seger sang. Please, observe my actions and accuse me of being chivalrous. I will take it as a compliment.

2 Responses to Whatever Happened to ‘Women and Children First’?