File this under, “how a manuscript becomes a published novel.”*

I spent the last week or so poring over the proof copy of Walking On the Sea of Clouds, and realized that I’m not as good at the mechanics of writing as I thought I was.

And what’s worse, every punctuation error in the proof came straight out of the manuscript I submitted. They didn’t change them, I guess because they thought I wanted them that way, but very soon I wanted to grit my teeth at my own inattention to detail.

My main problem was hyphenating words that didn’t need hyphens, such as writing “pre-fabricated” where “prefabricated” is a perfectly good word, or “set-up” instead of “setup.” Not a tragedy, by any stretch, but what annoyed me most was that I had been inconsistent within the document itself and used both versions here and there — “de-briefing” in one spot, say, and “debriefing” in another — with no rhyme and certainly no reason.

So, herewith I apologize to the editorial and production team at WordFire Press for not being more diligent in catching all those errors sooner. 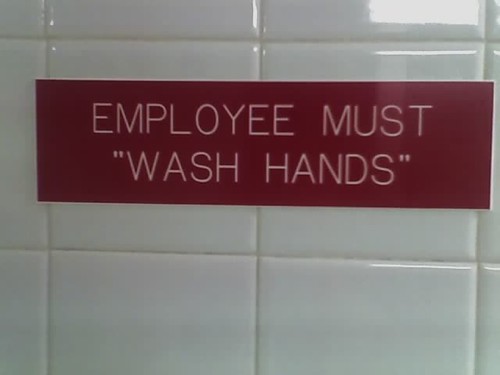 Punctuation can be pretty important. (Image: “Employee Must ‘Wash Hands’,” by Sean Graham, on Flickr under Creative Commons.)

I suppose I could have kept silent about my punctuation problems. Once the errors were corrected, folks who hadn’t seen an advance reader copy wouldn’t know how inconsistent my punctuation was in the early going. But I thought it was better to come clean about it, by way of expressing my thankfulness for the opportunity to catch the problem in production. To me, it validates my choice to go with a small press instead of self-publishing.

Will the final product be perfect, in the sense of having no flaws? Of course not. But it will have fewer flaws than the version I just saw, and that’s what matters.

And the good news is that this stage of the proofing is done, so now we press on. Wish us luck!

___
*That line sparked a strange idea: To write a song to that effect, along the lines of the old Schoolhouse Rock number, “How a Bill Becomes a Law.”

One Response to This Punk Can’t Punctuate