The ‘Endless Mazes of Literature’

Today is Washington Irving’s birthday (3 April 1783 – 28 November 1859). Irving is best known for the 1819 short story “Rip Van Winkle” and the 1820 short story “The Legend of Sleepy Hollow,” both of which appear in the collection The Sketch Book of Geoffrey Crayon, Gent. The collection also includes the comical story “The Mutabilities of Literature,” in which Irving wrote a long passage that perhaps applies even more to our literary world than it did to Irving’s. With emphasis added:

Language gradually varies, and with it fade away the writings of authors who have flourished their allotted time; otherwise, the creative powers of genius would overstock the world, and the mind would be completely bewildered in the endless mazes of literature. Formerly there were some restraints on this excessive multiplication. Works had to be transcribed by hand, which was a slow and laborious operation; they were written either on parchment, which was expensive, so that one work was often erased to make way for another; or on papyrus, which was fragile and extremely perishable. Authorship was a limited and unprofitable craft, pursued chiefly by monks in the leisure and solitude of their cloisters. The accumulation of manuscripts was slow and costly, and confined almost entirely to monasteries. To these circumstances it may, in some measure, be owing that we have not been inundated by the intellect of antiquity; that the fountains of thought have not been broken up, and modern genius drowned in the deluge. But the inventions of paper and the press have put an end to all these restraints. They have made everyone a writer, and enabled every mind to pour itself into print, and diffuse itself over the whole intellectual world. The consequences are alarming. The stream of literature has swollen into a torrent — augmented into a river — expanded into a sea.

How much more, today, have the computer and the e-reader “put an end to all … restraints” on publication and “made everyone a writer”? How much more has current technology “enabled every mind to pour itself into print”? How much more has “the stream of literature … swollen into a torrent — augmented into a river — expanded into a sea”? 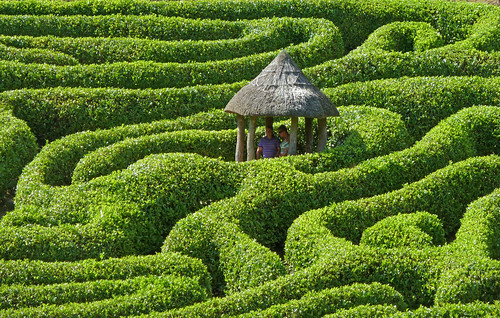 Are the “mazes of literature” this difficult to navigate? (Image: “Get Lost,” by Tim Green, on Flickr under Creative Commons.)

If our current electronic age survives the pressures and turmoil of passing history, our descendants may be “inundated by the intellect of antiquity” — that is, by what we pass off as intellect — and have their “modern genius drowned in the deluge.” We will be gone, of course, the “authors who have flourished their allotted time” however short that may be, so it will depend upon our descendants to ensure that they aren’t “completely bewildered in the endless mazes of literature.”

Something to think about, eh?

Thanks for spending a few minutes here, and I hope you have an excellent week!

Afterword: I find it interesting that, in addition to his literary pursuits, Washington Irving served as US ambassador to Spain (1842-46). I’d be up for something like that, if the government were to call upon me to serve in that capacity … hint, hint.