That idea I floated yesterday? The one about making Legislative pay and benefits dependent on how well Congress, you know, actually does its job? Turns out it wouldn’t take immediate effect because of the 27th Amendment.

Herein lies a lesson in how age dims the faculties … especially when one’s references are also old.

The copy of the U.S. Constitution that I have near to hand, and that I used before publishing yesterday’s post, was printed in 1984. Thus it predates the 1992 ratification of the 27th Amendment — and, frankly, I had forgotten that amendment even existed. Given that it was ratified during my second USAF assignment, and didn’t make a big impression on me at the time, perhaps I can be forgiven that error.

Anyway, the 27th Amendment says, “No law, varying the compensation for the services of the Senators and Representatives, shall take effect, until an election of Representatives shall have intervened.”

Thus, Congress can’t vote itself an immediate pay raise (which I knew, and joked about in “I Think I’ll Run for Congress”), but they also can’t have their pay immediately docked. The first thing makes sense, but I’m not so sure about the second. 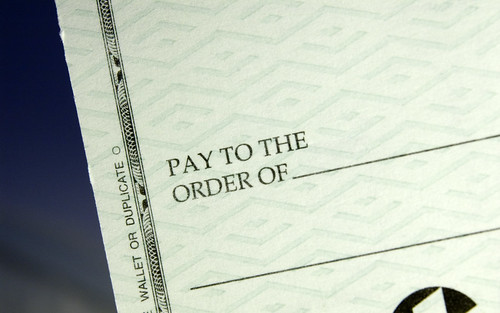 (Image: “Pay to the order of…,” by dslrninja, on Flickr under Creative Commons.)

So, a law like the one I laid out yesterday could be passed, but it wouldn’t go into effect until the next congressional session. That might be okay — in fact, it might be good, because it would give a little bit of time for lawmakers to start buckling down to their fiscal responsibilities.

I suppose another way to go, though it would take more time, would be to put forward a new amendment. Maybe something like this, to change one word in the 27th Amendment to allow for pay reductions to take immediate effect:

Section 1. The twenty-seventh article of amendment to the Constitution of the United States is hereby repealed.

Section 2. No law, increasing the compensation for the services of the Senators and Representatives, shall take effect, until an election of Representatives shall have intervened.

In the current climate, I imagine something like that would be ratified fairly quickly by the states. But, like yesterday’s proposal, I doubt I’d find many people willing to co-sponsor it.