With the identical Mars-2 mission already on its way, Mars-3 launched from the Baikonur Cosmodrome to follow it to the red planet. Once it arrived, on December 2, 1971, Mars-3 became the first craft to make a soft landing on the surface of Mars. However, perhaps because of a raging dust storm at the time of landing, it only operated for about 20 seconds before contact was lost.

Interestingly, the Mars-2 and Mars-3 missions were even more ambitious than just placing landers on the surface. Each lander also carried a small robot that was intended to “walk” on the Martian surface on a set of skis, taking radiation measurements along the way.

While the Space Shuttle Endeavour is in orbit on its final flight, it seems fitting that we remember that 15 years ago today — May 19, 1996 — Endeavour launched from the Kennedy Space Center on another mission.

Here’s wishing the best to the current crew of Endeavour as they carry out their mission to the International Space Station.

Also in today’s space history, 40 years ago the Mars-2 spacecraft launched from the Baikonur Cosmodrome. On its approach to Mars in November 1971, it released a lander that “entered the Martian atmosphere at roughly 6.0 km/s at a steeper angle than planned” and crashed: the first human-built article to reach the surface of Mars.

With apologies to Sir Arthur C. Clarke, ten years ago today — April 7, 2001 — the Mars Odyssey orbiter was launched from Cape Canaveral on a Delta-II rocket. (Image from Mars Odyssey, “In Search of Landing Sites on Mars,” false-color-enhanced by NASA and JPL-Caltech. NASA image.)

Mars Odyssey was designed to produce high-resolution maps of Mars and to search for water on the red planet. In arrived at Mars in October 2001, and in December 2010 it became the longest-lived spacecraft operating in Martian orbit.

Thirty-five years ago today — September 9, 1975 — the Viking-2 orbiter and lander were launched on their way to Mars by a Titan-IIIE booster out of Cape Canaveral. The first Viking lander had been launched a few weeks earlier, as noted in this blog post.

Viking-2 landed about a year after launch at Utopia Planitia. Fans of many Star Trek iterations will recognize Utopia Planitia as the place starships are built — with facilities on planet and in orbit above. For more information on the science fictional Utopia Planitia Shipyard, try this Memory Alpha page or this starship guide.

We haven’t really gone “a-viking” to another world (yet), but 35 years ago today — August 20, 1975 — we did launch the Viking-1 mission from Cape Canaveral. Viking-2 was launched a few weeks later, on September 9th.

Launched by Titan-IIIE boosters, the Viking missions each consisted of a lander and an orbiter. In addition to cameras that returned stunning images of the Martian landscape, the Viking landers carried instruments to study the Martian surface in terms of biology, chemical composition, meteorology, seismology, and other properties.

Viking-1 entered Mars orbit on June 19, 1976. The orbiter and lander orbited Mars together for a month while the orbiter took images which NASA used to select a landing site. The lander and orbiter separated and the lander descended to the surface on July 20th.

Other than the failure of the seismometer and difficulty with a stuck locking pin on the sampler arm, all of the experiments on the Viking-1 lander performed well. The lander “was named the Thomas Mutch Memorial Station in January 1982 in honor of the leader of the Viking imaging team.” Contact with Viking-1 was lost on November 13, 1982.

Mariner-4 had been launched from Cape Canaveral on November 28, 1964 (for which, see this space history installment).

From the National Space Science Data Center page linked above,

After 7.5 months of flight involving one midcourse maneuver on 5 December 1964, the spacecraft flew by Mars on July 14 and 15, 1965. Planetary science mode was turned on at 15:41:49 UT on 14 July. The camera sequence started at 00:18:36 UT on July 15 (7:18:49 p.m. EST on July 14) and 21 pictures plus 21 lines of a 22nd picture were taken [and] stored in the onboard tape recorder. At 02:19:11 UT Mariner 4 passed behind Mars as seen from Earth and the radio signal ceased. The signal was reacquired at 03:13:04 UT when the spacecraft reappeared. Cruise mode was then re-established. Transmission of the taped images to Earth began about 8.5 hours after signal reacquisition and continued until 3 August. All images were transmitted twice to insure no data was missing or corrupt.

(First image of craters on the surface of Mars, from Mariner-4. NASA image.)

More Mariner-4 images are available on this NASA page.

(Cross-posted from the Space Warfare Forum.) 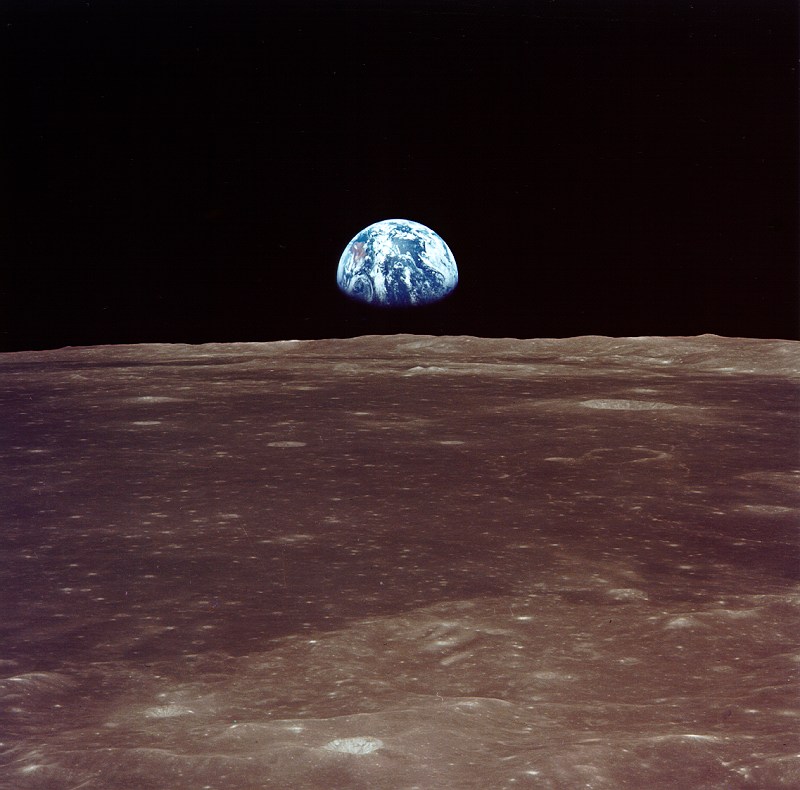 Yesterday the White House released the new National Space Policy of the U.S.A., available in as a PDF file at the noted link.

On a quick read-through, I didn’t find anything to which I could strongly object. Even the much-anticipated (by the aerospace industry) relaxation of export restrictions did not come across as the drastic change that had been hyped. I might disagree with the conciliatory tone, which seems almost an apology for rather than an affirmation of the country’s efforts to lead the way in space, but that seems to be the norm for the current Administration.

I don’t know that I agree with the focus on an asteroid mission and then a Mars mission (i.e., a Mars orbital mission) to the exclusion of a return to the Moon, since the Moon would seem to be the logical base of operations for such excursions. But maybe that’s the point: to reach those other objectives assumes first establishing a presence on the Moon. I hope that’s it.

Mariner-4 arrived at Mars on July 14, 1965, where it conducted the first successful flyby of the planet and sent back the first pictures of the Martian surface.

Maybe Mariner would be a good name for the first ship to take people to Mars. Sure wish I could go….

Ten years ago today — September 23, 1999 — the Mars Climate Orbiter spacecraft fired its main engine to go into orbit around Mars. The maneuver was unsuccessful, however, due to a navigation error. The spacecraft was lost.

The “navigation error” — i.e., the root cause of the failure — was contention between English units and metric units in the ground-based navigation software. It was a glitch in the program, and could be considered a systems engineering failure or a configuration management failure in that the error crept in because two different teams — the Colorado-based spacecraft team and the California-based mission navigation team — used two different measurement systems.

The spacecraft had been launched on a Delta-II rocket from Cape Canaveral Air Force Station on December 11, 1998.

While I’m at it, and for no better reason than that I’m pleased with the work I did on it, here’s a link to the newly-updated North Carolina Aerospace Initiative web site.