I’m trying to be a better person, but it ain’t easy.

A couple of years ago, I decided that I would try — with all deference to Yoda and his “Do or do not, there is no try” advice, which is patently ridiculous — to implement a leadership principle I learned in the Air Force to my social media and other interactions. Specifically, that I would try to praise in public but correct in private.

In other words, I decided that I would try to avoid coming down hard on people in public — to not flame them in comments on their posts or hold them up personally to ridicule, and instead to try to find good things to say in public (or to say nothing at all, following the advice of Thumper’s mom). That is, if I thought someone needed to be corrected, I would try to do so privately: in person, perhaps, or at least in a private exchange of messages.

Which leads me to what I’ve come to call the “spinach in their teeth” test. When I hear people say things or see them post things on social media that I think warrant some form of correction, I’m trying to treat those people the same way I would if they had spinach in their teeth. I might be tempted to say nothing at all, but if I thought they needed to know I certainly wouldn’t stand up and announce to the world, “Hey, so-and-so has spinach in their teeth!” No, instead I would lean in and say softly, “Hey, looks as if you have some spinach in your teeth.” Correcting in private.

Because being corrected in public can make us pretty uncomfortable:

Being corrected in public can feel rather like being pulled on a scamnum. (Image: “G. Guidi, The correction of dislocations,” from Wellcome Images [UK] on Wikimedia Commons.)

I admit that I fail from time to time — probably more times than not. As I said, this self-improvement thing ain’t easy.

Does it work? Sometimes. I’ve had a few good conversations with people about various issues, though from what I can tell some of them still have bits of metaphorical spinach in their teeth. And that’s life: we can’t expect everyone to heed what we have to say, especially when it’s a corrective. (Lord knows I don’t heed all the corrections that come my way. [Please don’t look too closely at my teeth.])

At the very least, I hope that having these conversations privately, one-on-one, at least comes across better than broadcasting to the world. But maybe I’m just deluding myself.

What do you think? Is that leadership principle even valid anymore, in our social-media-saturated world? Because sometimes it’s hard to bite my tongue, or stop my fingers from typing out responses….

___
P.S. In case you’re interested, you can find more of my views on leadership in my novel, Walking on the Sea of Clouds, and in Quality Education. I’d be much obliged if you’d check them out! GR

Today is Leif Erikson Day, so today’s quote is attributed to him.

Erikson — literally the son of Erik the Red — is credited with being the first European to land on the North American continent beyond Greenland. He’s also credited with saying,

We are all leaders, whether we want to be or not. There is always someone we are influencing, either leading them to good, or away from good.

(Nothing horrific here: a “zombie” post only in the sense of coming back from the electronic dead.)

Here again I’m reprising an old blog post that I particularly like. It was published on this date in 2012 on the old NCSU-IES blog.*

I wrote the post in response to two items on another blog, in which Dr. Bret L. Simmons waxed eloquent on things we should “always” or “never” do to be successful leaders. I’m usually not a fan of absolute statements like that, but I found some good things, as you’ll see:

One item from the “always” list that really resonates with me is, “Always show up on time, well prepared, and give your best effort.”

I find that the better I prepare the better I’m able to give my best effort; however, all too often, I disappoint myself. The outcome doesn’t match my expectation, so I suspect the effort wasn’t really my best. But I’m reminded of Dr. W. Edwards Deming‘s frequent challenges to his audiences that anyone who was not putting forth best efforts should stand and be recognized. No one did, of course, because so long as we’re sincere the effort we expend will be the best we can bring at that time and place. Best efforts don’t guarantee the best results.

I also find that my attempts to show up on time and prepared influence my expectations, such that I expect others to also show up the same way. Unfortunately, we have a phenomenon around here called “Cary Time,” in which chronological starting time is more a suggestion than a requirement (or, for fans of either Ghostbusters or Pirates of the Caribbean, it’s more a guideline than a rule). This brings up another item from the “always” list — “Always expect the best but prepare for the worst” — which fits well with one from the “never” list: “Never apologize for having reasonable expectations of other people.”

Which seems a reasonable point to close. I don’t know how much value there is in long lists of things to “always” or “never” do, or even in blog posts about such lists, except that they may help us think about things a little differently and take stock of how we’re doing.

We’re doing our best, and I hope we’re doing well. 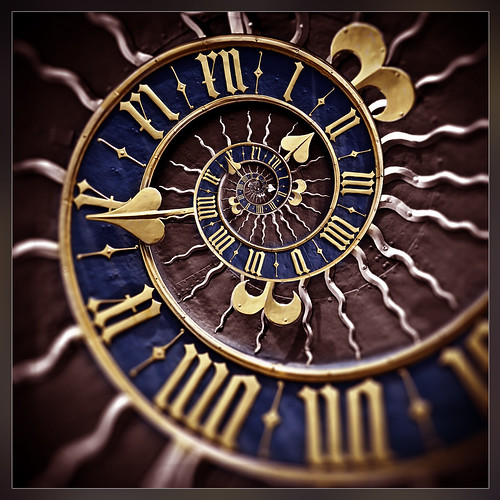 Always? Never? When is it, anyway? (Image: “Perpetual,” by Ghetu Daniel, on Flickr under Creative Commons.)

In some ways my blogging today is all of one accord, since my post this morning — Don’t Expect Instant Transformation — also discussed the topic of expectations. I’m gradually learning how to give myself a bit more grace when it comes to tempering my expectations of myself, and trying to put into practice advice I first learned a quarter century ago: not to “let perfect be the enemy of good.”

That’s sound advice for all of us.

___
*Readers who have fought these zombie blog posts before may recall that the old IES blog unfortunately no longer exists.