Twenty-seven years ago today, the Hubble Space Telescope was launched aboard the Space Shuttle Discovery on mission STS-31. I worked that mission as part of the Air Force Flight Test Center recovery crew: I stood alert on the flightline during the launch on the 24th, ready for the possibility of an “abort once around,” then greeted the vehicle on the lakebed when it landed on the 29th. In between, of course, the famed telescope was deployed. 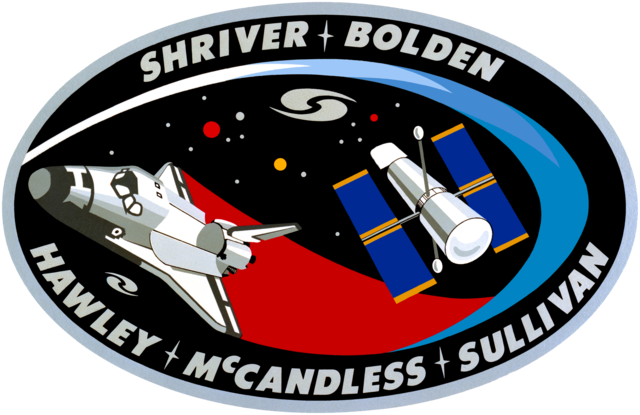 (I know, I know: This post is supposed to be about a quote, so get to the quote!)

You probably know that the telescope’s namesake, Edwin Hubble (1889-1953), was an influential astronomer. He demonstrated that other galaxies exist beyond the Milky Way — showing that the universe was even more enormous than we thought until then — and also correlated the redshift (the degree to which light is shifted toward the red end of the spectrum) with distance to show that the universe is still expanding.

Eventually, we reach the utmost limits of our telescopes. There, we measure shadows and search among ghostly errors of measurement for landmarks that are scarcely more substantial.

That quote brings two things to mind for me.

First, that the Hubble Space Telescope has shown us that far more exists at “the utmost limits” than most of us ever imagined or perhaps even can imagine. It turns out that besides our own vast galaxy there may be anywhere from 200 billion to as many as 2 trillion galaxies in the universe, each with billions of stars. Even as we build more and more powerful instruments to probe the depths of space, I feel sure that we won’t reach “the utmost limits” of what’s out there in many lifetimes.

But the second thing I thought of when reading that quote is that it could apply not only to telescopes and understanding the universe but also to thought. I imagine a similar sentiment describing all knowledge, not just astronomical knowledge: Eventually, we reach the utmost limits of our reasoning. There, we study shadows and search among ghostly errors of imagination for truths that are scarcely more substantial.

And if we reach those utmost limits, what then do we do?