It seems pretty evident to me that sometimes you choose your enemy, but sometimes the enemy chooses you. And sometimes things act as enemies that we may not usually think of in those terms. Those enemies are nebulous, incorporeal. Not nations, nor people, but ideas, concepts, for which the terminology of battle may be ill-suited.

When it comes to things like that, I think of permanent as opposed to temporary enemies. Permanent or abiding enemies may not hold our attention as much as temporary foes that spring up and must be dealt with ad-hoc. A short-term enemy attacks; a long-term enemy infiltrates. Perennial enemies operate at lower levels and over longer timelines, it seems, than do enemies that charge us with sudden ferocity.

Charles Dickens identified two such eternal enemies in A Christmas Carol. In one memorable scene Scrooge is surprised to learn that the Ghost of Christmas Present stands upon two dirty, emaciated children he names as Ignorance and Want. The human race may face other timeless and shadowy enemies, but these two must be included on the list.

Are they brother and sister, as intimated by Dickens, or are they partners of some sort? Do they feed one another, help one another, keep one another alive? Is one dominant? Is one the forcing function of the other?

Are they related to what may be considered another perennial and sinister enemy of mankind: injustice? Is our political or ideological outlook based (at least in part) on which of these, Ignorance or Want, we consider cause and which effect? This may be something of a chicken-and-egg argument, but we often differ over which problem is worse and deserves the most (and the most immediate) attention. 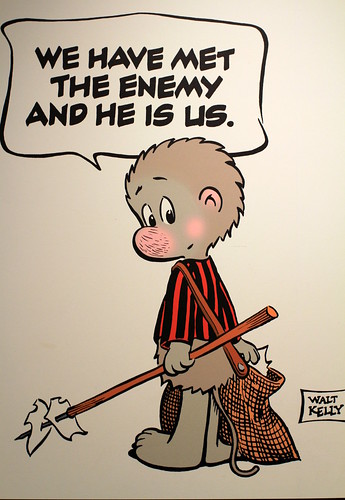 (Image: “We have met the enemy…,” by Thad Zajdowicz, on Flickr under Creative Commons.)

Unfortunately, these permanent, intangible enemies do not arouse as high a degree of fervor as more acute and palpable enemies. Even if they did, in the long run we have to include Ignorance in the same category as Want in terms of Christ’s observation, to wit: that just as we will always have some poor with us, so too we will always have some dimwitted. We cannot eliminate either, but we would do well as a society if we could minimize both.