Getting Just Deserts? I’d Rather Just Have Desserts

It has been “interesting” these past few weeks, for varying degrees of the word, watching the attacks and counterattacks of the Hugo Award fracas* and dealing with the fallout and toxic residue. Being a person of little import or influence may have shielded me somewhat, for which I’m thankful. At least for the moment, some of the ire seems to have abated, indignation reduced from a full boil to a slow simmer. 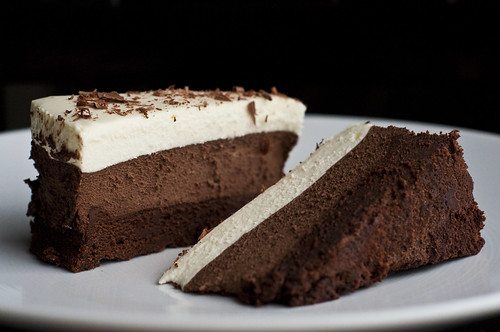 (Getting just dessert is certainly tastier than getting one’s just deserts. Image: “Triple Chocolate Mousse Cake,” by Josh, on Flickr under Creative Commons.)

Despite the fact that my nominated story was part of the notorious slate of candidates that locked up more categories than anyone thought possible, several friends — including some who were aware of the controversy — sent me nice congratulations. And a few of them, in congratulating me, said it was “well-deserved.”

I value their support very highly — things that are rare are precious — and I appreciate the sentiment, but “deserve” carries a specific connotation to me such that I prefer not to use the word. My way of looking at it is perhaps peculiar, and one that others may consider odd, but I think no one “deserves” an award (least of all, me). To put it in a more direct way, I don’t “deserve” a Hugo Award — but maybe not for the reason that you think. The way I see it, no one does.

My first objection to saying that I or anyone else “deserves” an award goes back to my time in the Air Force, when I was writing evaluation reports and promotion recommendations and such. Even though “deserve” can mean “be qualified for” or “be worthy of” — and I hope that’s what my friends meant — I learned not to use the word because it can also carry the connotation of being “entitled to” something. No one is entitled to or has an automatic right to such a reward or place of privilege.

Thus I would not say, “Technical Sergeant So-and-so deserves promotion to Master Sergeant,” but instead would say she was ready for promotion, was qualified for and already taking on some of the roles of the higher rank, or perhaps that in my opinion she should have been promoted sooner. Likewise I would not say that Lieutenants Frick and Frack “deserve” Air Force Commendation Medals, but instead that they had each “earned” a medal by virtue of their service.

So when I think about the Hugo Awards — for “excellence in the field of science fiction and fantasy,” and the “most prestigious award in science fiction” — I think that I do not “deserve” such recognition, and indeed none of us does, in the sense that none of us are entitled to it. None of us has a right to anything such as that.

The second reason I dislike using the word “deserve” is that in contrast to the phrase “just deserts” it seems to me everyone has things happen to them — good and bad, but particularly bad — that they don’t deserve. When we use the word that way, such as “Oh, that’s terrible, he didn’t deserve that,” the implication is that the person did not earn or have control over the outcome but rather that fate had conspired against them for reasons unknown and unfathomable. She did not deserve to endure that pain and suffering, he did not deserve to contract that disease.

To flip that from the negative to the positive: Even when I think of the good things that have happened in my life, I am loath to say that I deserved them. Some I could claim to have earned, but many seem arbitrary, in the sense that I did little or nothing to earn them, that fate conspired in my favor perhaps for no reason at all, when I might have deserved — really deserved — far worse. I am grateful for all such blessings, but I do not feel that I deserve them.

All of that is a long way of saying that I don’t think I “deserve” a Hugo Award nomination, much less an award itself, because things like that are (to me) not, strictly-speaking, deserved. Even so, I am grateful for the nomination and I might, just might, possibly, have earned it. Why? Because I did the work.

I wrote a story. In fact, the work I did on my story (or that any of the nominees and would-be nominees did on their stories) was complete long before the nomination period opened. I cast that bread upon the waters, so to speak. I did the work, cashed the check, and expected no further reward.

I still expect no further reward. I don’t “deserve” any further reward. I appreciate that some people think that the work — not me, personally, but the work I did — is worthy of recognition. I acknowledge that others disagree: some on the basis of the work, some perhaps for reasons unconnected to it. But I am buoyed by every report that someone appreciated spending time in my make-believe world; I claim no right or entitlement to any accolade, but I am humbled to think that anyone considered my work to be worthy of recognition.

I admit that all the controversy surrounding the nominations has made this a less pleasant experience than it might have been. A friend whom I respect even contacted me with the suggestion (encouragement? urging?) that I should withdraw my nomination, to avoid being caught, dragged under, and having my career drown in the raging turmoil. I appreciate the concern, and to some degree share it; the idea was, and in some respects still is, tempting.

But to paraphrase what I told some other friends when the furor was first cresting: whenever the uproar threatens to steal all my joy I try to concentrate on two things. First, I wrote the best story I could. Second, some people seem to have liked it. I would not go back and undo the first, and I will not cease to be thankful for the second.

And, for the record: I’m also thankful for desserts. Especially pie.

N.B. The above was adapted from an article I sent out in my newsletter. If you want to receive my newsletter, then I may question your judgment but you can sign up for it here anyway.

*I hesitate to call the Hugo Awards controversy a “war,” since at heart this is all contention over works of imagination. Far more has been written about it than may be possible to read (part of the hazard of any controversy involving writers). For my own take on the matter, if you’re curious, see What I Nominated for Hugo Awards, and Three Ideas to Consider and The Hugo Awards: Considering the Controversy.