Blogging the New CD: P is for Parties

Ninth in a series of blog posts about the songs on my new CD, Distorted Vision.

The last event at many (most? all?) science fiction and fantasy conventions, after the dealers have packed up, the closing ceremonies have been adjourned, and most of the fans and guests have departed, is the “dead dog party.” That also happens to be the title of the last song on my new album:

The convention is almost over, it’ll soon be time to go home
Back to the mundane workaday world, where I sometimes feel so alone
When I make some remark about STAR TREK, or steampunk or robots or clones

You may not be a convention-goer; I wasn’t, until fairly recently. I’ve been a science fiction and fantasy fan for most of my life, but I grew up “far from the madding crowd” and far from any conventions, and indeed did not start attending conventions regularly until I’d settled down after retiring from the Air Force. And because I came to fandom late, many times I’ve walked around a convention — especially a big convention like DragonCon — in wide-eyed wonder and with a degree of nervous trepidation, not unlike Gollum as seen here: 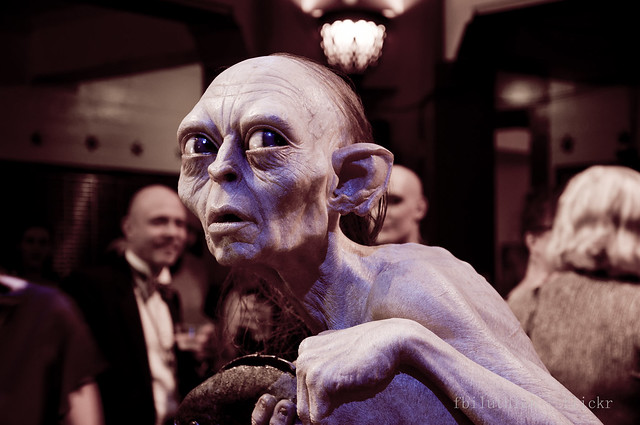 (“Gollum Hanging Out Amongst Party Goers,” by Ariane M, on Flickr under Creative Commons.)

That said, for the most part I’ve been very pleased with how accepting and accommodating people in the SF&F community have been. Sure, at WorldCon in London in 2014 I felt a little out of place — even in the filk room, where the regulars pride themselves on being open and friendly — and this year’s awards controversy brought out the worst in a great many people and led to a lot of people being uncomfortable at a lot of conventions, but in general my fellow fans have welcomed me, made me feel at home, and become my friends.

Which is why I hope many (most? all?) fans can relate to the chorus:

All my friends in fandom understand the things that I like
No matter what I am into, they don’t think I’m out of my mind
So when I’m driving away, you might hear me say
That I can hardly wait ’til next time

In many respects, then, this song is a tribute to fandom itself: fandom as it is, and maybe fandom as it should be. So regardless of whether you think of yourself as “fan” or “fen” or just “casual consumer,” and whether you’ve ever attended a convention or not, if you like science fiction and fantasy at all I hope “Dead Dog Party” resonates with you in some small way.

And if it does, I hope you’ll let me know.