Post-Campaign Blues: What I Learned, and What’s Next

The voters spoke two weeks ago today, and declared that I was not their choice to represent District D on the Town Council of Cary, North Carolina. C’est la vie.

I am grateful to everyone who voted for me, and a little pleased that I garnered 3.5% of the vote while investing less than 0.86% of the total money spent on the District D campaign. How much less than 0.86% I’m not sure, since the other candidates haven’t filed their final reports (and two of them are continuing to spend money on a runoff); that figure is based on their reports from 2 weeks before the election, and I know one candidate in particular spent a whole lot more money on mailings and robocalls and such right up to election day. 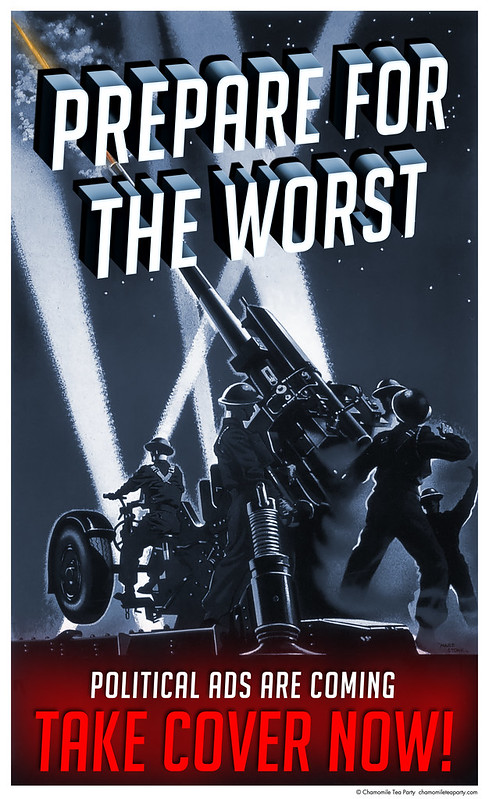 (“Prepare for the Worst: Political Ads are Coming!” by Jeff Gates, on Flickr under Creative Commons.)

I do wonder how many more votes I might have gotten if I had mailed out a postcard or two, or put up a few signs, or advertised a little. I think I might have made it competitive, but it’s hard to do when you spend less than $100. But, to paraphrase the song,

So, besides the obvious lesson that you have to be willing to spend a great deal of money — either your own or someone else’s — to get elected, what other lessons did I learn, or have confirmed? I’ll catalogue a few:

So what’s next for me in politics? Not much.

I will continue my Anti-Campaign: Anyone, anywhere, can write me in for any office at any time. I remain the Anti-Candidate, and continue to approve that message. (I have it on good authority, for instance, that at least one person wrote me in for Mayor of the Town of Cary. But since the Board of Elections doesn’t release the tallies for write-in votes, I have no idea how many people might have done so.)

Will I ever run for office again? Maybe.

That is to say, I could be convinced to run if enough people wanted to recruit me. You’d have to be willing to handle the campaign management — the paperwork and reporting, the scheduling and coordination, the fundraising, advertising, and so forth. Why? Because I’m more than willing to serve, and willing to stand in the arena and talk about issues and experiences and qualifications, but I don’t have any desire to work on another campaign. (Not even my own.)

After all, as the song says,

But rather than just hold my hand out for you to drop money in it,* I prefer to offer a little something of value. So I’m happy to sell you some CDs or other merchandise, or stories when I can get them published, or to write a speech for you or help you edit something. I will continue to try to produce content that people want to buy and to provide services that help people tell their own stories in the best possible way.

So … let me know if you have any questions, or if I can do anything for you, and sign up for my newsletter (using the form in the right sidebar) for periodic updates and info!

And, if you happen to have voted for me (or written me in), thank you very much!

___
*Don’t get me wrong, if you want to send me money I’m okay with that. If any of this has been entertaining for you, we’ll call it a fair trade. Send me a note and I’ll be happy to give you my PayPal information.