Wait a Minute: US Troops Were Wounded by Weapons that Didn’t Exist?

Oh, not exactly, says the New York Times, ’cause those WMDs we found weren’t the WMDs we were looking for. 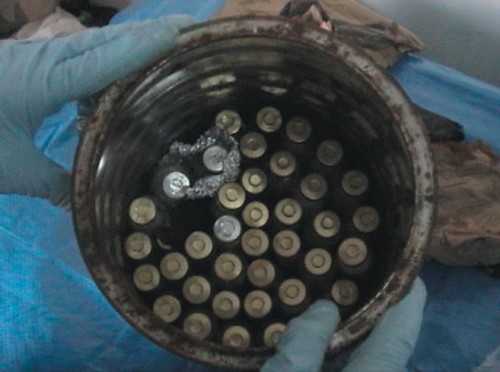 (“What? WMD’s were found in Iraq?” by wstera2, on Flickr under Creative Commons.)

We’ve known about the existence and contents of the Al Muthanna complex in Iraq for some time now, so what was found there was in itself not news, and other WMD-related finds have likewise been known for years, but it’s still something of a breakthrough for the NYT to have covered this latest story at all. Of course, their coverage still seemed slanted against the Pentagon and, by extension, the Executive Branch, for its failure to treat troops and disclose details adequately, and they seemed quick to adjust their aim away from the current Administration and to use the opportunity to extend the anti-Bush narrative. But here’s the crux of the story:

From 2004 to 2011, American and American-trained Iraqi troops repeatedly encountered, and on at least six occasions were wounded by, chemical weapons remaining from years earlier in Saddam Hussein’s rule.

In all, American troops secretly reported finding roughly 5,000 chemical warheads, shells or aviation bombs, according to interviews with dozens of participants, Iraqi and American officials, and heavily redacted intelligence documents obtained under the Freedom of Information Act.

The NYT story declares that “the discoveries of these chemical weapons did not support the government’s invasion rationale” because they were “remnants of long-abandoned programs, built in close collaboration with the West.” That rings false to me, since I seem to recall that the rationale for invasion was based as much on Iraq’s refusal to adhere to over a dozen WMD-related UN resolutions, and its possession and prior use of chemical weapons, as it did on the possibility that their nuclear and other programs were growing more active.

Some other tidbits from the story:

I suppose I should be pleased that the NYT published this story at all, though I fear I’m destined to be disappointed in how it will be interpreted by those who will continue to chant the inane rhyme accusing a particular former President of prevarication leading to death. To counter that refrain, however, I refer anyone interested to John C. Wright’s masterful job of pointing out that the invasion of Iraq was both lawful and justified.

But what I fear more — even more than what else might be awaiting discovery under the sands of Iraq — is that many of these weapons are now in the hands of Islamofascists who seem certain to have more desire to employ than to destroy them.

2 Responses to Wait a Minute: US Troops Were Wounded by Weapons that Didn’t Exist?