Today is Dabo Swinney’s birthday, so I took a look at one of his many inspirational quotes. Coach Swinney is the second-winningest head football coach in Clemson history, trailing only the legendary Frank Howard, but along with success on the field Coach Swinney has emphasized preparing his players for life beyond football.

Today’s video is a little different from others in the Between the Black and the White series, in that I broadcast it live on Facebook in the morning and only later transferred it over to YouTube. As such, it’s a little poorer quality than my previous videos and doesn’t have the title card and credits and whatnot. Anyway, here it is:

Here’s the quote from Coach Swinney, in case you don’t want to watch the video:

I think that’s good advice, even for the vast majority of us who don’t have many opportunities to stand in the spotlight — actual or metaphorical. I’m sorry to say that when I’ve had such opportunities I haven’t thought too much about the light I could bring with me, the light I could let shine though me (or out from me). I hope to do better at that, this week and into the future.

And I trust that you will let your light shine bright as well! Have a great week!

It’s been 35 years since the Clemson Tigers were college football’s National Champions. The 1981 Tigers secured their final victory in the 1982 Orange Bowl, when I was a senior in high school and — if I recall — had yet to receive my acceptance to attend the school. (I’m certain I had applied, but things moved slower back then.) The 2016 Tigers secured their final victory last night, in a game that lived up to its billing and will likely go down as “one for the ages” … as some of us predicted it would.

I admit that, in the grand scheme of the universe, it’s a little silly for me to invest so much energy and attention in following the team and its exploits. It’s a little silly for me to wear so much orange and purple, to get so excited when the players execute flawlessly and so agitated when the opposition does so, to feel in the pit of my stomach the anticipation of each play as it develops. It’s a little silly for me, whose football career ended after a year playing on the “club” level — that’s one step above intramural and a really big step below junior varsity — to tense my muscles at every hit, to yell at the television as if the players can hear me, to vicariously picture myself in the midst of the action.

And it’s still a great time to be a Clemson Tiger.

___
P.S. Speaking of silliness, I write stories and songs and other things from time to time and you can subscribe to my newsletter to keep up with all those shenanigans.

This blog entry is about sports, and more than sports.

This past week, my alma mater announced that our Hall of Fame coach (American Baseball Coaches Association HOF, to be exact) would no longer be leading our team. Jack Leggett, who coached the Clemson Tigers to the NCAA Tournament in 21 out of the past 22 seasons, will not be allowed to serve out the last year of his contract. He was not fired for coaching the team to a losing season; if anything, the team’s turnaround to avoid a losing season against a difficult schedule, and its reaching the NCAA Tournament at all, were quite remarkable. Nor was he fired for any misconduct, or misuse of resources. But he was fired nonetheless. 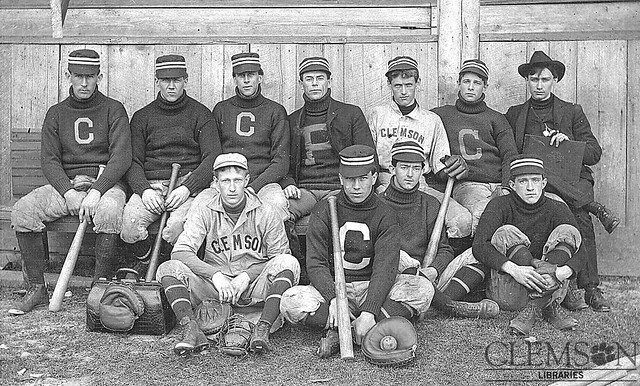 (I like how this picture captures the long tradition of Clemson University baseball — that’s Coach John Heisman, back row center. “Clemson baseball team, c. 1903,” from clemsonunivlibrary, on Flickr under Creative Commons.)

I recognize that the baseball program had not been as consistent in recent years as it has in the past, and that many fans were unsatisfied with its results. Most of us are unsatisfied when our teams — whether sports or corporate or political — don’t perform as well as we think they should. But I do not understand how otherwise reasonable people, who in their daily lives accept the ups-and-downs, setbacks and struggles they encounter, can act as if they expect coaches and teams to win every game.

After reading earlier in the week that Coach Leggett’s job might be in jeopardy, on Wednesday — the day before the announcement was made — I wrote a note to Clemson’s athletic director, Dan Radakovich, to say that I, for one, thought we should show loyalty to Coach Leggett commensurate with his long record of service to the university. I’m sure my message was one of many that Mr. Radakovich received over the past few months, with all manner of advice on how to proceed with the Clemson baseball program. I hope a significant portion, like mine, was supportive of Coach Leggett — not that it made any difference in the long run.

And it seems there was more at stake than simply the wins and losses. According to the TigerNet.com report on Mr. Radakovich’s Thursday press conference, Coach Leggett’s loyalty to his staff may have played a part in his own downfall:

Earlier reports hinted that Leggett refused to make changes to his staff … and Radakovich was forced to make the move to dismiss Leggett. Radakovich didn’t confirm that move but did hint at it.

Subsequent reports seem to corroborate that Coach Leggett’s refusal to fire members of his staff led to his own ouster. He might have been able to save his own job, had he agreed to sacrifice his assistants, but he chose to stand firm on their behalf. That is loyalty.

I would have preferred if we had kept Coach Leggett at Clemson, and given him the support needed to continue his record of success and take our program as far as it could possibly go. I would have preferred if we had let him decide when it was time to retire from the game, and that we had taken the opportunity at that point to honor him, celebrate his accomplishments, and give him a send-off worthy of a Clemson Tiger. It was not to be, but I wish him well, and thank him for all he did for our school and our student-athletes.

I am left to wonder if perhaps loyalty and commitment don’t mean as much today as they used to. But they still mean something to me.

In Mr. Radakovich’s press conference, he talked about the qualities he would seek in a replacement. He said he didn’t have an “exhaustive list,” but he rattled off a quick set of traits:

You want to have someone who has shown the ability to lead, to win games, to recruit quality student athletes, to be a great representative of Clemson.

It seems to me that Jack Leggett had accomplished all four of those things — leading, winning, recruiting, and representing Clemson well — for 22 seasons. In other words, we need not have looked beyond our own campus for the kind of coach we apparently want.

Opening night of the new baseball season, with a stirring rendition of “The Star-Spangled Banner” and a decent first pitch by President Bush — not a strike, but better too high than to throw it in the dirt.

Now, if only I didn’t have two simultaneous projects to work on so I could actually enjoy the game….