Forty-five years ago today — May 25, 1965 — NASA launched Apollo boilerplate mission BP-26 from Cape Canaveral. This mission, like the previous mission in February, carried a satellite experiment. The Pegasus 2, like its predecessor, had large wings that detected impacts from micrometeoroids. The boilerplate Apollo command and service module acted as a protective shroud over the Pegasus experiment during launch.

Ten years ago today — May 19, 2000 — the Space Shuttle Atlantis launched from the Kennedy Space Center on mission STS-101.

And today, of course, Atlantis is taking part in another space station mission at this very moment: installing equipment, delivering supplies, and making repairs. Its current mission also happens to be the last scheduled mission for Atlantis.

We look forward to a successful conclusion and a graceful retirement for shuttle Atlantis. 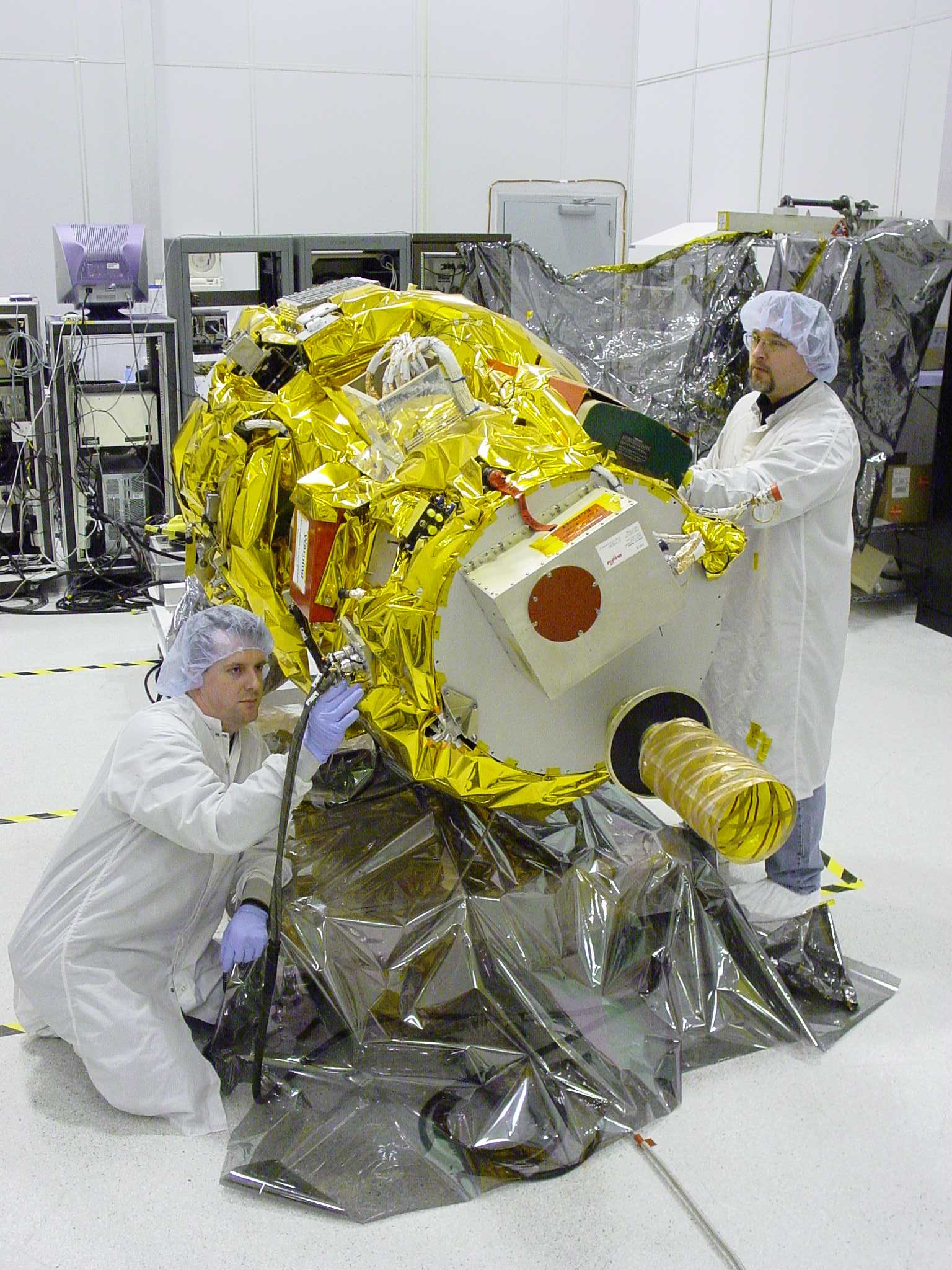 The DART spacecraft was meant to rendezvous with and maneuver around the Multiple Paths, Beyond-Line-of-Sight Communications (MUBLCOM) satellite; however, the mission was not successful.

From the mishap investigation report,

DART performed as planned during the first eight hours through the launch, early orbit, and rendezvous phases of the mission, accomplishing all objectives up to that time, even though ground operations personnel noticed anomalies with the navigation system. During proximity operations, however, the spacecraft began using much more propellant than expected. Approximately 11 hours into what was supposed to be a 24-hour mission, DART detected that its propellant supply was depleted, and it began a series of maneuvers for departure and retirement. Although it was not known at the time, DART had actually collided with MUBLCOM 3 minutes and 49 seconds before initiating retirement.

I don’t know if they characterized it as a “successful failure,” in that they learned something useful from it, but it’s important to try these things, even if some of them fail. As I heard Howard Hendricks say many years ago, “If you’re not falling down, you’re not learning to ski.”

Twenty-five years ago today — April 12, 1985 — Space Shuttle Discovery, which is in space right now, lifted off from the Kennedy Space Center on mission STS-51D.

The Discovery crew consisted of astronauts Karol J. Bobko, Don E. Williams, Margaret Rhea Seddon, S. David Griggs, Jeffrey A. Hoffman, and Charles D. Walker, plus astronaut/Senator E. “Jake” Garn. Senator Garn was the first active member of Congress to fly into space, but he was uniquely qualified to do so, having been a Naval aviator and then a pilot in the Air Force Reserve.

They deployed two satellites, Telesat-1 (also known as Anik-C1) and Syncom-IV (also known as LEASAT-3), though the latter did not spin up properly and its boost motor failed to ignite. It was recovered and repaired on a later shuttle mission.

Everything went well for the first two days, but on April 13th the Apollo-13 Service Module suffered a crippling explosion. The number two oxygen tank ruptured, causing a cascade of failures throughout the spacecraft’s systems — including the loss of all the oxygen from the number one tank as well.

(View of the damaged Service Module, taken by the Apollo-13 crew. NASA image.)

NASA aborted the Moon landing and turned their full attention to getting the astronauts home alive. The crew splashed down successfully on April 17th.

This page has a good explanation of the cause of the accident.

Ten years ago today — March 25, 2000 — the “Imager for Magnetopause-to-Aurora Global Exploration” spacecraft, also known as IMAGE, was launched from Vandenberg AFB, California, atop a Delta-II rocket. IMAGE was designed to study the Earth’s magnetosphere for two years, but it exceeded all expectations and actually sent back observations for over five years.

IMAGE was the first satellite mission dedicated to imaging the Earth’s magnetosphere, the region of space controlled by the Earth’s magnetic field and containing extremely tenuous plasmas of both solar and terrestrial origin.

In other historical news, on March 25, 1960 — 50 years ago today — NASA test pilot Joseph A. Walker made his first X-15 flight at Edwards AFB, CA. Walker eventually

From a strictly personal point of view, I like these particular history items because I was stationed at both of those air bases during my career.

Grissom and Young orbited the earth three times, and performed manual maneuvers in orbit for the first time; their flight lasted just under 5 hours. To add to the tally of space “firsts,” Gus Grissom became the first person to eat a corned beef sandwich in space. From this NASA history page,

Grissom constantly complained about the dehydrated delicacies concocted by NASA nutritionists. He was willing to eat the reconstituted food only because there was nothing else available. Or so he thought. Gus had no idea that John Young had more than just souvenirs stowed in his space suit pockets.

“I was concentrating on our spacecraft’s performance, when suddenly John asked me, ‘You care for a corned beef sandwich, skipper?’ If I could have fallen out of my couch, I would have. Sure enough, he was holding an honest-to-john corned beef sandwich.” John had managed to sneak the deli sandwich, which was one of Grissom’s favorites, into his pocket. As Gus sampled the treat, tiny bits of rye bread began floating around the pristine cabin and the crew was just about knocked over by the pungent aroma of corned beef wafting through the small confines of the spacecraft. “After the flight our superiors at NASA let us know in no uncertain terms that non-man-rated corned beef sandwiches were out for future space missions. But John’s deadpan offer of this strictly non-regulation goodie remains one of the highlights of our flight for me.”

(X-24A with rocket engine ignited after being dropped from the B-52 carrier aircraft. NASA image.)

The same B-52 used in the X-15 program (and later in the Pegasus program*) carried the X-24A to about 40,000 ft (13,860 m) altitude, where it was dropped and its rocket engine took the rest of the way through its flight profile. It then glided to a landing on the dry lakebed at Edwards AFB.

___
*Full disclosure: When I was stationed at Edwards (1986-90), I was on the Flight Readiness Review committee for the first Pegasus launch from that same B-52.

This was also its closest flyby, passing within 327 km (203 mi) of the planet. On this flyby, Mariner-10 discovered that Mercury has an intrinsic magnetic field.

Mariner-10 was the first spacecraft to visit two planets, and the first to use a gravity-assist maneuver in a “slingshot” around Venus to reach Mercury. The mission succeeded despite some difficulties, however. One problem the mission encountered was of special interest to spacecraft designers in the future:

A trajectory correction maneuver was made 10 days after launch. Immediately following this manuever the star-tracker locked onto a bright flake of paint which had come off the spacecraft and lost lock on the guide star Canopus. An automated safety protocol recovered Canopus, but the problem of flaking paint recurred throughout the mission.

Another first for the mission occurred when an attitude control problem used up excessive propellant. Mission planners devised a never-before-used procedure to “use … solar wind on the solar panels to orient the spacecraft.”

Since 1975, when the last of its attitude control propellant was used up, Mariner-10 has remained in orbit around the sun. Pioneer-5 was one of the first deep space missions, and achieved a heliocentric (sun-centered) orbit between Earth and Venus. Scientists maintained contact with the vehicle for 106 days and received signals from a distance of 36.2 million kilometers (22.5 million miles), the farthest distance achieved at that time in the space race. Telemetry received from Pioneer-5 confirmed the existence of the interplanetary magnetic field, which until then had been just theoretical.