We all enjoy art.

We may not enjoy every art, and our enjoyment varies from person to person, community to community, culture to culture. But we all enjoy art. We take pleasure in observing it, in sensing it, whether by reading or hearing or viewing or touching or, in the case of culinary arts, smelling and tasting.

Not only that, but we have it within us to produce art. We may not produce every art, and our individual artfulness varies even more than any other trait or factor we might name because we have it within us to produce — or to attempt to produce — more than one art each. And according to British author G.K. Chesterton, that ability, whether we allow it to flourish or keep it bottled up, is what makes us, as human beings, distinct from every other species on our wondrous planet.

In The Everlasting Man, a 1925 volume of Christian apologetics, Chesterton wrote,

It is the simple truth that man does differ from the brutes in kind and not in degree; and the proof of it is here; that it sounds like a truism to say that the most primitive man drew a picture of a monkey and that it sounds like a joke to say that the most intelligent monkey drew a picture of a man. Something of division and disproportion has appeared; and it is unique. Art is the signature of man.

I love that last line: “Art is the signature of man.” Not of a man, not of a woman, but of mankind writ large, of humanity, of homo sapiens.

Now, it may be that at some point in the future — perhaps the nearer future than we wish, if the Planet of the Apes franchise turns out to be in the least prophetic — that a monkey will draw a picture of a man. And it may be that the monkey that does so turns out to be of only middling or very little intelligence. But if a monkey draws a picture of a man, will that monkey have become something more than a monkey? Will the monkey have crossed some threshold that the human race crossed long ago?

Does art make us human? Yes, and “art is the signature of man.”

And whatever you do this week, you have it within you to do it artfully — so make your signature bold!

Happy Birthday to my publisher, Kevin J. Anderson, and to Firefly leading man Nathan Fillion. And to you, if it’s your birthday!

God is in the details.

You might also be familiar with the saying, “The Devil is in the details,” so there seems to be some contention there. I poked around a bit and found that the van der Rohe quote could perhaps better be expressed as “God dwells in the details,” and I quite like the way that sounds. 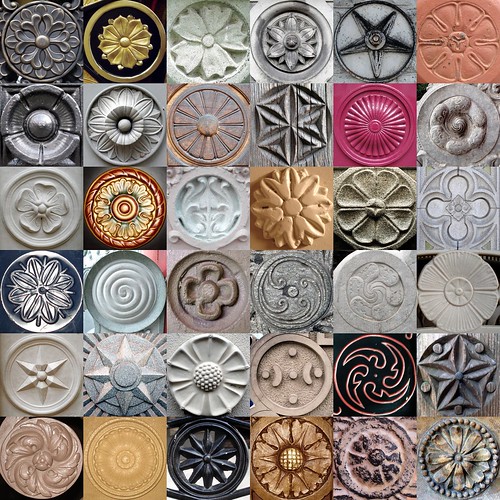 As we look deeper, we see more and different details. (Image: “Details,” by Tom Magliery, on Flickr under Creative Commons.)

I like to think of it in terms of systems: as we pull a system apart into its subsystems and components and parts and materials, we uncover additional details about it and hopefully come to understand it better — but in some ways the system becomes even more mysterious the deeper we go, the way the subatomic quantum world is stranger and harder to fathom than our everyday world. But there is still order and beauty there, and where we struggle with the details as we try to create (or re-create) something orderly and beautiful we begin to find God, the creator of order and beauty.

But we can get trapped in the details, too, which is where the Devil whispers to us that the details are all there is and we’ll never get the details right. So it’s important to back away sometimes, to once again try to apprehend how all the details work together in the whole.

I hope you have the chance to see God in your world this week!

Last night’s meeting of the Cary Public Art Advisory Board went well. I agreed to serve on two Artist Selection Panels: one for the art to accompany the Walker Street Extension project, and another for art associated with the Symphony Bridge at Koka Booth Amphitheatre.

In related news, Cary Visual Arts’ temporary outdoor exhibit is now in place, with ten different sculptures arranged around the Town Hall campus. If you find yourself near Cary Town Hall with a few minutes to spare, stop and take a walk around; some of the pieces are magnificent.

My son’s painting, “Star Guardians,” is in the “Show Us Your Art” contest on Brickfish.com and as of this typing is ranked #169 out of over 4200 entries. I think it’ll be on display in Raleigh this weekend, but if you want to see it now, it’s at this page.

Today is Cary’s annual “Spring Daze” arts & crafts festival at Bond Lake Park, so in a little while I’ll walk over there to serve my 2-hour shift in the cultural arts booth. So far as it will involve pretending to know what I’m talking about, it won’t be too different from what I do 99% of the time … just this time it’ll be with respect to public art plans and projects.

In other news, I have a couple of days of traveling coming up so I may not post as frequently as I have been. For the two or three people who actually read this thing, that will probably come as something of a relief ;).

My writing friend Alex Wilson first alerted me to the Triangle Filmmakers’ Special Interest Group (TFSIG*), but unfortunately he and I have never been at a meeting together. He’s been very busy recovering from a serious head injury sustained in an auto accident, so he’s got a good excuse. (He’s a great guy, so go ahead and check out his web site.)

You came back? Thanks.

Tonight’s TFSIG meeting was a smallish affair. I listen a lot at these meetings, and have learned more than I ever thought I would about the ups and downs of independent filmmaking. One day if I write a story that’s film-able, I hope to at least be conversant about the process … even though I won’t have any control over it, I want to understand it. (Of course, if I quit going to meetings and sat down to write, I’d be a lot closer to fulfilling that “if” clause. 🙁 )

Anyway, I thought this would be a good time to introduce After the Peak, a docudrama made by Jim McQuaid. Jim is the driving force behind the TFSIG, and even though only a few people will see this I’m happy to plug his film. It’s certainly a timely subject:

We might argue the details about when we will hit the downslope of the oil availability curve, but I’m not sure anyone can deny that we will hit it. And we need to have alternatives ready to deal with the inevitability. Orson Scott Card argued awhile back on The Ornery American (sorry, I can’t find the precise link right now) that we’d be well served to slow our use of oil for transportation and power because we’re going to need the remaining oil for a long time to keep making plastic.

I haven’t seen Jim’s film yet, but I plan to order a copy.

I’ve done my civic duty for the week: Tonight’s meeting of the Town of Cary’s Public Art Advisory Board went pretty well.

We got to see and comment on preliminary designs for a cell phone tower that’s going to replace an old water tower close to downtown. This is a semi-big deal, since a few years ago the town (or some part of the town) demanded that a cell phone tower near I-40 be “disguised” … so now we have an obviously artificial-looking “pine tree” that sticks way up above all the real pine trees. It was poorly done, so we wanted to avoid that kind of mistake. Several companies have antennae on the water tower now, but the town put up a new water tower awhile back so this one’s going to come down. We want to keep the cell service where it is, so a new tower has to go up; and since the tallest buildings downtown are only a couple of stories, the tower will be seen from a long way away. The first concepts looked pretty good — very unique, and in a good way — and I look forward to seeing the next iteration.

The next event is the “Spring Daze” arts & crafts fair, on Saturday April 26th at Bond Lake Park. Come on out and see us, if you’re in the area! 🙂

I sent this article — “On Borrowed Time,” by Michael Gecan (from Boston Review) — to the rest of the folks on the Public Arts Advisory Board, but other civic-minded folks would probably be interested in it as well.

By the date of the meeting, however, the developers who had helped double DuPage’s population in just 30 years had run out of land. The income generated by their construction efforts had dwindled to a trickle. Education and public safety costs continued to climb.

His run-down of ways municipalities avoid reality — denial, gimmicks, blaming “others,” and withdrawal — was especially interesting. Good food for thought for anyone involved in city or county government … even those of us on advisory boards.

Today I attended my first meeting of Cary’s Public Arts Advisory Board, and was very impressed.

The artists responsible for conceptualizing the downtown area “streetscape” presented their 90% design review, and they’ve done a fantastic job. The project will be done in stages over the next few years, and its exciting that I’ll get to see it develop “from the inside” — or at least a lot further inside than I would’ve been otherwise.

I’m very pleased to have been selected to serve on the board, and look forward to the next meeting.