If I Had Been Mrs. Trump’s Speechwriter

A thought experiment, of sorts.

I’ve been avoiding overt political topics lately, but Melania Trump’s apparent plagiarism in her speech at the Republican National Convention created quite a buzz in the speechwriting community (and everywhere else, it seems). My thoughts, as a speechwriter…

I understand Mrs. Trump gave the staffer who helped with the speech some passages she liked from Mrs. Obama’s previous speech. If the provenance of those lines was clear and I had been Mrs. Trump’s speechwriter, I would have recommended (if she really wanted to use them) that she preface them with something along the lines of, “like another woman whose husband was privileged to earn his party’s nomination,” etc. The way I see it, if she didn’t want to change the lines so the same message came through in a new way, then it wouldn’t have hurt to acknowledge the source (even if obliquely). But I hope I would have recommended, instead of using the same words, that she think of an example or two from her own life to illustrate the same points, because the strongest part of Mrs. Trump’s speech was when she focused on her own personal story. And this type of speech works best when it is deeply personal, heartfelt.

Mrs. Trump’s delivery was pretty good, especially considering that English is not her native language. But if I had been Mrs. Trump’s speechwriter, I would have encouraged her to deliver the speech in two parts. First, a short version — maybe three to five minutes — delivered in Slovene, because that would be more comfortable for her and her delivery would (I think) have been more fluid and consistent. Second, a little bit expanded version — perhaps ten minutes — covering the same material and delivering essentially the same message, in English.

(I have seen this work before, for a helicopter pilot from Cameroon who was in my flight at Squadron Officer School. When we gave presentations, he spoke first in his native French and second in English; even though most of us did not understand his French we could clearly see how much more confident he was presenting in his native tongue.)

I think if Mrs. Trump had prefaced her remarks with a brief explanation, the audience would have appreciated the interlude in her own language because her delivery would have been more natural and she would have been even more poised and confident. 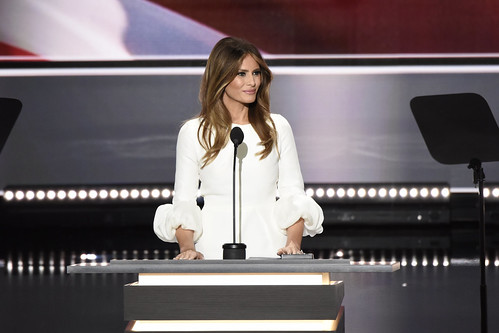 If I had been Mrs. Trump’s speechwriter, my aim — as it has been with everyone for whom I’ve written speeches — would have been to help her sound like her most authentic self, not to make her sound like anyone else. That would extend beyond trying to help her avoid copying anyone else, to helping her find wording that complemented the natural cadence of her voice and stories that resonated with her and could connect her to her audience.

To me, she seemed at her best when talking about coming to the U.S. from Slovenia; that was a good springboard for her message. I think if she had spent a little more time talking about her story, and tied elements of her story to the problems we face and the upcoming campaign, her message would have been stronger — and she would not have had to endure the repercussions of lifting those lines from Mrs. Obama’s speech.

One Response to If I Had Been Mrs. Trump’s Speechwriter