Answering a Writing-Related Question, and Admitting that I’m Badly Stuck

A few weeks ago I invited my newsletter readers* to submit questions they wanted me to answer — questions about anything: writing (stories or songs), editing, pastimes, whatever. I haven’t been very good at answering them in the newsletter, but I thought I might include some here on the blog anyway (probably as sporadically).

This one in particular ends up with a confession, which I hope will be good for my soul…. 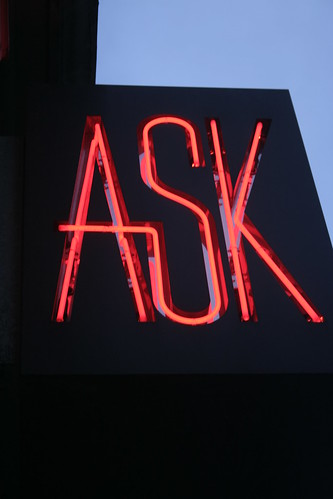 (Image: “ASK,” by Anne Thorniley, on Flickr under Creative Commons.)

One reader asked: Is it harder to write a short story for an anthology, or a full novel?

I thought that was a great question, and I wrote back right away with a partial answer. As I thought about it a little more, I realized that even though I’ve found short stories to be generally easier — just because they’re less complex than novels and we get to “the end” faster — they’re still challenging for a couple of reasons.

First, for me personally, short stories are hard to write because I tend to write long (which makes editing blog posts and newsletters into quite a chore). Within science fiction and fantasy, a short story has a limit of 7500 words—beyond that and you’re into “novelette” territory. But anthology editors often ask for even shorter stories! In fact, one editor only wanted 6500 words and I thoroughly busted the limit; thankfully, he liked the story enough that he didn’t ask me to cut very much.

Second, I find short stories for anthologies to be particularly challenging depending on how tightly focused the theme of the anthology is. Some anthologies have broad themes, like the Star Destroyers anthology that came out earlier this year. The working title and the theme of that anthology changed a couple of times, but in general the stories were supposed to address operations — and particularly battle operations — aboard starfaring ships. Even with that rather broad idea, it took me a good while to figure out what story I wanted to write!

I have a much harder time coming up with stories when the anthology theme is very specific. One of the hardest stories for me to write was for Chuck Gannon’s Lost Signals anthology, because it had to take place within the specific bounds of his “Caine Riordan” universe. I think it was difficult for me because I had a terrible fear of messing something up in his universe. That fear may have been a little overblown — as most fears of that type are — because he wouldn’t let that happen, but it was compounded by the simple fact that I didn’t want to let him down if the story didn’t fit into his universe. I rather liked the story I wrote, but I had such a hard time writing it that when Larry Correia asked me if I wanted to write a story for one of his anthologies I thanked him and told him I didn’t think I could do it.

Which leads me to my unfortunate confession: I haven’t written more than a few words of fiction since finishing that story. I’ve tried. I’ve got ideas, and notes upon notes, but the idea of trying to compose, of trying to bring these ideas out of my head onto the page, has become anathema to me. Even my songwriting has suffered. In fact, that’s part of why I started back up on blog posts: to see if I might find a way out of these doldrums.

I’m stuck fast; struggling against it has worn me out; and I hate it. And here’s the deeper, more frightful confession: I’ve begun to wonder if something in the process of writing that story damaged some part of my creative self.

But that’s probably a topic for some other day.

___
*You can also subscribe to my newsletter. I’d be pleased if you would (and I’m always willing to take new questions!).