Quantifying My Contribution, or, Picking Up After the House of Cards Fell

A few months ago, during my campaign for Town Council, I wanted to refer potential voters to a blog entry I wrote when I worked at NC State University. Unfortunately, when I searched for it, I found instead that nearly every post I had made to the Industrial Extension Service blog had been deleted when the outfit rebranded itself, changed its name, and revamped its website.

Specifically, of the 145 posts that I personally wrote for the blog, only 1 — an entry about a company joining the “Manufacturing Makes It Real” Network — was left online. Why that one was left is a mystery to me,* since the manufacturing network languished since my departure and now for all practical purposes appears defunct.

Although I missed the campaign opportunity to refer to my blog entry about North Carolina’s restrictive small business licensure requirements, I contacted IES — they still use the same acronym as when I worked there — to obtain a copy of the blog archive. It took some time, but eventually I got what appears to be a complete collection of the entries. One of my former colleagues had to piece the records together, since apparently IES’s effort to purge the blog did not include a concurrent effort to preserve its contents. That’s odd and disappointing, since as public records of the state — having, in at least a few cases, some historical value — their retention would seem to be important even if public access to them is no longer desirable. 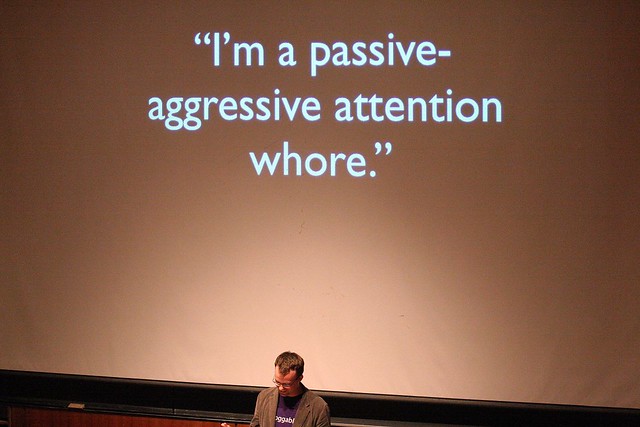 Yeah, that about sums it up. (Image: “Why We Blog,” by Duane Storey, on Flickr under Creative Commons.)

At any rate, I obtained the collection, and it was easy to see just how thoroughly the old blog was destroyed in producing the new one. Of the 546 entries that had been made prior to my April 2014 departure — I was made an offer I had to refuse — only 9 are still available as of this morning (1 of those being the mysterious MMIR Network reference I mentioned above).

It was also easy to see just how much I contributed to the old IES blog. My 145 solo entries accounted for over 25% of the blog’s content; not surprising, really, since I was employed as a writer and at the time we saw the blog as a viable platform for telling people about what IES did. (For the last couple of years I was actually in charge of the whole blog, and coordinated a team of folks who contributed other entries.) I also ghost-wrote some entries for people, and I’m not sure exactly how many of the remainder I either edited or posted on behalf of the authors, but it’s safe to say that I had a hand in producing at least 40% of the blog.

It was also disappointing, and a bit sad, to see what that platform has become. The numbers above show how active it used to be in terms of content, even if its readership was limited. But as of today there have been a grand total of 15 new entries made to the blog in the over 18 months since I left IES. (Add that to the pre-departure entries still extant and you’ll see there are only 24 entries on that blog currently … dating back to 2009.**) If IES maintains that rate — not even 1 new entry a month — it will take them until around 2057 for their blog to have as much content as it had when I left.

I could speculate as to how it came about that the IES blog was so completely scrubbed of content. At first I thought all the entries by people who had left IES had been purged; if so, they obviously missed a few. But entries by some people who are still IES employees were also dropped from the blog, so it seems the content removal was general as well as radical. I cannot discern any rhyme or reason in what was deleted versus what was retained; perhaps there was no rationale or philosophy behind it at all. That, unfortunately, would not surprise me.

But don’t be surprised if from time to time you see a “blast from the past” post here on my blog, in which I reprise some entry of mine from the old IES blog that still has some value or interest. Even if I’m the only one who thinks so.