We Need Government, But Not Necessarily Governing

Fantasy fans may be expecting a quote from the Harry Potter series this morning, since today is J.K. Rowling’s birthday; while that was tempting, I decided to take this in a different direction.

In addition to being Ms. Rowling’s birthday, today is also the birthday of US economist Milton Friedman (31 July 1912 – 16 November 2006). Friedman received the Nobel Prize in Economics in 1976, and is something of a hero to libertarians because he argued for smaller government and a freer economy. However, it’s important to note that Friedman understood the importance of government, as he said in 1973:

We need a government to maintain a system of courts that will uphold contracts and rule on compensation for damages. We need a government to ensure the safety of its citizens — to provide police protection. But government is failing at a lot of these things that it ought to be doing because it’s involved in so many things it shouldn’t be doing.

We have to recognize that we must not hope for a Utopia that is unattainable. I would like to see a great deal less government activity than we have now, but I do not believe that we can have a situation in which we don’t need government at all.

The problem is that often government spends too much time and effort governing — that is, imposing requirements and restrictions on citizens as to what they must and must not do. If we as citizens need governing, it is only because we have failed to govern ourselves; and if we freely impose upon ourselves a government to rule us rather than to operate alongside us — if we accede to be governed in that way — then we will have admitted that liberty is too great a burden for us to bear. 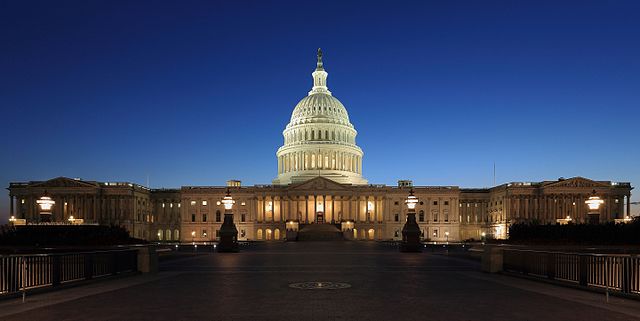 (Image: “US Capitol at Dusk,” by Martin Falbisoner, on Wikimedia Commons.)

I prefer the idea of a government that governs itself well; that leaves the rest of us to govern ourselves as best we can; and that intervenes and interferes in our lives very little.

And now, if you’ll permit me an aside on “This Day in History” … I was interested to read on the Internet (so of course that means it’s all true) that today marks three separate events in the US space program, each having to do with the Moon:
– In 1964, the Ranger 7 spacecraft sent back the first close-up photographs of the Moon;
– In 1971, Apollo 15 astronauts David R. Scott and James B. Irwin became the first to ride across the Moon’s surface in the lunar rover; and
– In 1999, NASA crashed the Lunar Prospector spacecraft into Shoemaker Crater at the lunar south pole.

I was interested in all of those things, of course, because last week my lunar colonization novel, Walking On The Sea of Clouds, was published. And not just that, but I mention the Lunar Prospector mission in the novel! It comes up as a group of colonists pass Shoemaker Crater on a journey to retrieve polar ice needed to keep the colony alive.

Thanks, and have a great week!