We Must Be Strong

Much of what I observe in our polity today — and over the past several years, frankly — seems calculated to weaken the United States. Sometimes it appears to be for short-term financial or political gain, by people who want to cash in before everything goes Tango Uniform.* Sometimes it appears to be for ideological gain, by people for whom the U.S. represents something terrible.

In contrast, I believe we must not allow ourselves to weaken, to diminish, or especially to disappear. The U.S. must be strong: economically, diplomatically, and most especially militarily. I hold that an enfeebled, chastened, toothless United States would be a prelude to disaster for the world. 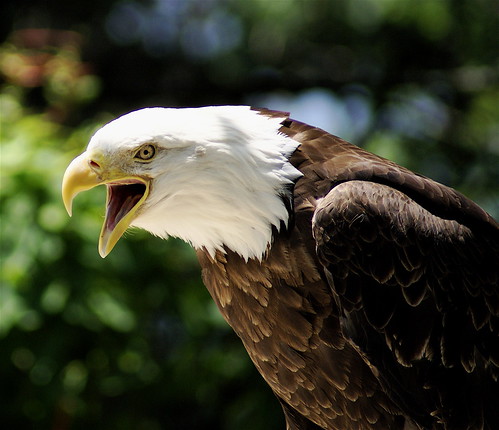 Our national symbol, making its voice heard. (Image: “‘If You’re Not Outraged…You’re Not Paying Attention!’,” by Kenny P., on Flickr, under Creative Commons.)

Why? Because for all our faults, for all our failings, for all our missteps and miscalculations, we have done more than any other nation in history to protect and preserve the weak by virtue of our strength. The way I see it, in terms of the sheer power at our disposal, we have wielded our strength more judiciously and with less outright malice than pretty much anyone.

If you believe otherwise, I will not attempt to dissuade you in this brief missive. But I will not let your negativity become my prophecy or your perception become my reality. I will not let reports of our decadence and decay or predictions of our doom and decline dash my hope in a better future, or my belief that our systems are the best systems under which people can be free to live and produce and thrive.

We must be strong. I would rather we could demonstrate our strength in ways that build rather than break, heal rather than harm, and even when — not if, in this imperfect world — we need to use our strength to defend ourselves and those we treasure, I would prefer that we do so swiftly, cleanly, with as much restraint as possible. But we must be strong in the first place.

We are not perfect, and we will make mistakes. In spite of our imperfections, however, we are in general a shining example of what is good in the world: freedom of thought, freedom of action, freedom of association. If we are to remain so — both free, and an exemplar of the best that freedom conveys — we must remain strong.