The Visceral Feeling of Pride

A while ago I wrote about pride, and particularly that pride gets a bad rap, but I wonder if sometimes other things masquerade as pride. That is, if other emotions may give us the same sensations as pride, and make us feel as if we’ve accomplished something even if we haven’t.

That brings up the question of whether we can identify the physical results, the visceral sensations, of pride.

Think back to something you did that went very well, and how you felt at the time. Not something routine, but something fairly important: instead of warming up hot dogs and being happy that they only got a little charred, you fixed a sumptuous meal to celebrate a special occasion and every dish came out perfect; instead of stammering your way through a presentation or some other public appearance, your delivery and timing were flawless and the audience hung on your every word; or whatever you can recall that was a clear victory for you, a triumph in your life.

Think about that sense of accomplishment, in terms of what your senses told you. What did it feel like, deep inside? Was it the “thrill of victory”? Did you feel it through your chest, or down in your belly, or all over? Was it a little like being nervous, but at the same time being excited? Can you describe it at all?

I don’t mean to imply that the same emotional states create the same physical sensations in each of us — in the case of these feelings of elation, it’s very possible that one person’s fluttering stomach is another person’s head rush is another person’s feeling of walking on air. But I wonder if that feeling we have during a moment of prideful accomplishment may be duplicated by other things. 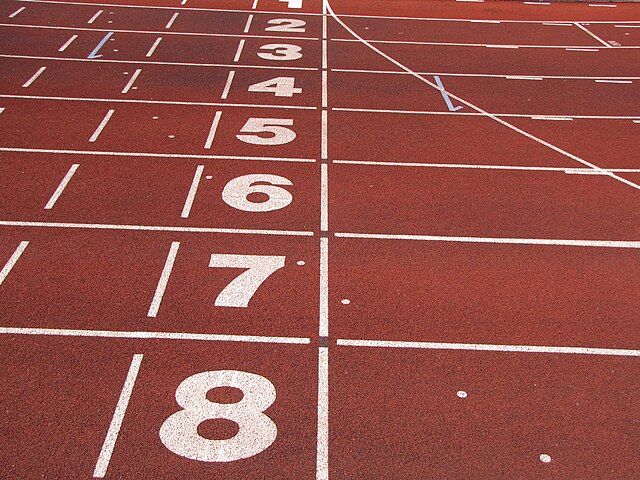 What kinds of things can give us the feeling of pride similar to what we might get from crossing the finish line? (Image: “Athletics tracks finish line,” by Petey21, on Wikimedia Commons.)

For instance: could it be that for some people defiance feels like pride? That is, is it possible that being defiant — whether acting rebellious or standing against a perceived authority — elicits the same emotional feedback as being proud of some accomplishment? I think back to times when I have been defiant, and the sensations may have been similar.

Could other emotions also produce similar (or even indistinguishable) physical states to the feeling of pride? Thus, is it possible to feel something like pride without a clear, recognizable accomplishment of which to be proud?