The Kingdom of God Doesn’t Look Like Your Fancy Building

Some months ago, at a church we were visiting, as part of his sermon the pastor presented a detailed design for a new multi-building campus. It was a “this is what we feel led to do” message, even though they had no land to build upon, and a prelude to asking the congregation to sign on to the ambitious vision.

More recently, another pastor posted plans on social media for his church’s grand new building, reminding his congregation that it was about time for them to get their pledges in so the renovations and construction could commence. From what I saw, it looked quite spiffy (as so many modern churches do): lots of seats in the fancy auditorium, plenty of classrooms and bathrooms, and of course a first-rate visitor’s center.

We’ve seen other churches propose equally bold schemes for expansion, all prefaced by the need to “step out in faith” — because “where God guides, he provides,” right?

Maybe, but this emphasis on buildings and this scraping for money to build them makes me profoundly sad. I find myself thinking that when they say “this is what we feel led by God to do” it’s really code (or a socially acceptable translation) for “this is what we want to do.”

They’d say it’s all for the glory of God, no doubt, and maybe they even believe it, but it sure looks as if it’s for the glory of that church, that congregation, that pastorate. The emphasis is on the building, the campus, the edifice — that’s where the bulk of their treasure is going, and we remember what Jesus said about where our treasure is, right? Way to keep the tithes in the storehouse, y’all.

After all, how much treasure does it take to build a building, pave a parking lot, renovate a fellowship hall? How much treasure is going to be locked away in cinder blocks and carpeting, heat pumps and flatscreen monitors, nurseries and offices and state-of-the-art sound systems? In comparison, how much treasure do they spend to feed the hungry, clothe the naked, or visit the lonely? That is, if we graphed it by amount spent (or by percentage), which column would be higher: facilities, or charity? And how great would be the difference?

Of course their church needs a building, some base of operations, some place where the congregation can congregate. But if a widow or orphan in distress showed up at the door of their building, could they do much more than treat them to a great concert, a stunning light show, and a thoughtful message about how much God loves them? They’ve spent their treasure on that welcome center with the coffee bar, so maybe they can give them a cup of coffee, and they’ve got a wonderful house band so maybe they can give them a CD or DVD. And of course they can pray for them. But would they have to cash in a spotlight or a microphone or a monitor to actually provide those needy people with something that would make a difference in their situation?

Maybe they’d say they’re most concerned with leading the lost to salvation, and that preaching takes precedence over reaching out a helping hand. But do they care so much about people’s souls that they don’t really care about them as people, or about addressing their physical, human needs? “And all Heaven just weeps,” sang Keith Green.

Maybe they think they can do it all — have the fancy building and the fog machine and the comfortable chairs, and still reach out a helping hand. But when weighed against the treasure they’ve spent on the church building, the help they offer looks like the scraps that fall from the rich man’s table. It reminds me of an old song,

“The poor you will always have with you,”
These are the words of our Lord.
I hope you’ll come to the service this Sunday
We got some brand-new mahogany doors 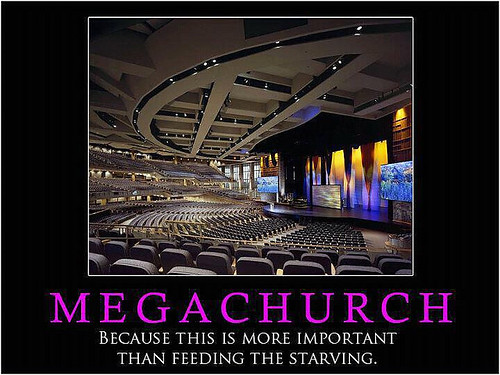 According to Wikipedia, a “megachurch” is “defined by the Hartford Institute as any Protestant Christian church having 2,000 or more people in average weekend attendance.” (Image: “Megachurch,” by Silly Deity, on Flickr under Creative Commons.)

Of course, they don’t need my approval to step out in faith (or to take out that mortgage) and build whatever kind of building they want. And they can believe that “where God guides, he provides,” and by extension they can believe that God is guiding them in that endeavor. After all, Isaiah 58:11 says, “the Lord will continually guide you, and satisfy your soul in scorched places,” does it not?

Yes, but there’s more to the Lord’s guiding and providing. We’ll look at that in part two.