Consider this my Easter sermon….

As I usually do, I spent part of Holy Saturday yesterday thinking about the Disciples’ sadness and despair and fear after Jesus’s crucifixion. I don’t think any of them actually expected or even dared to hope for the resurrection on the third day, and I expect that all of them were in shock to varying degrees. After all, scripture says that they “left him and fled,” which was, if not a fulfillment, at least a representation of Zechariah 13:6-7 (which Matthew tells us Jesus quoted at the Last Supper).

And if anyone asks him, “What are these wounds between your hands?” then he shall answer, “The wounds I received in the house of my friends.”

So yesterday I wondered what exactly the disciples did on that day of despair.

I imagine that some of them had relatives in Jerusalem or in the outlying areas, and sought refuge with them. Perhaps they went alone, or in twos and threes, but it’s unlikely they would have roamed or lodged together as a group that first day. I imagine that they stayed hidden for a time, and when it became clear they were not being pursued they became comfortable enough to venture out.

I imagine that when they ventured out they probably saw other Disciples here or there. I imagine them looking furtively around, perhaps afraid to signal or greet each other openly. They would recognize one another on sight, of course: not only because they had spent many months together and knew each other well, but because each of them would be marked by the hours he had spent in abject grief. 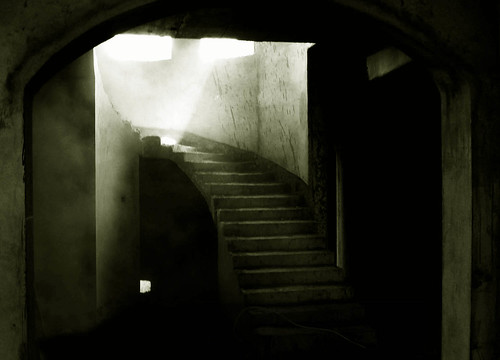 (Image: “Resurrection,” by fady habib, on Flickr under Creative Commons.)

But they couldn’t stay gone. They came back together.

We are not told who came back first, or what order they came back in. We are told that at one point Thomas had not joined them yet. But the main lesson, again, is that they could not stay away.

We, like the Disciples, may flee from certain troubles, may hide away for a time before we feel safe venturing out, and may glance about and over our shoulders to see if we’re being pursued. But if we fall away, may we find our way back as the Disciples did — and find the courage to live our faith in the open again.