The Bullies on Our Side

I think odd thoughts sometimes, and this may be one of the oddest: I come not to bury the bullies, but to praise them. At least, the bullies on our side.

(Full disclosure: I have only been bullied a little in my life, and I’m ashamed to say I was something of a bully for a while. It was part of my being young-and-stupid, and one of many parts that I would change if I could. What I’m talking about in this post, though, goes far beyond the schoolyard though it can be just as discouraging.)

Because when we think we’re right and other people are wrong, and we decide we need to enforce our rightness by making others conform to standards we set, we often end up relying on bullies to help us get our way. Not so much on the individual, interpersonal level (as adults), but enlarge the scope to the level of civic interaction and pretty soon the bully we know, the bully we like, the bully on our side becomes a most valued ally.

Why? Because much of society is unbalanced, power-wise.

Two equals who have different viewpoints and preferences are more likely to “live and let live” than two unequal parties, and even two closely matched entities may find it better to negotiate settlements. But in many cases where the power differentials are substantial, the less powerful party’s behavior is coerced in some way. Sometimes it’s overt and natural, as when parents teach their children how to behave in civil society. Sometimes it’s expected and voluntary, as when military members submit to higher authority. Sometimes, however, it’s subtle, insidious, and dictatorial.

Uninvited coercion on larger scales can be peaceful, as in the nonviolent movements of Ghandi and King that used moral suasion to great effect. It can also be martial, as in every revolution and riot that resorts to violence and the threat of violence to achieve its ends. Either way, the end result is accomplished by applying pressure — and remember, in physics terms pressure is force applied over an area. Force does not have to be shocking: the force you feel from atmospheric pressure is different from the force you feel if hit with a hammer, but it is a force nonetheless. And force, or the threat of force, is often what gets results in the wider world.

You may not think of such group action as bullying. But whenever we force someone who is not in our charge to do something they would rather not do, we effectively bully them — whether directly, or by proxy. And the biggest proxy bully around, that we have empowered to do the bullying on our behalf, is the government. 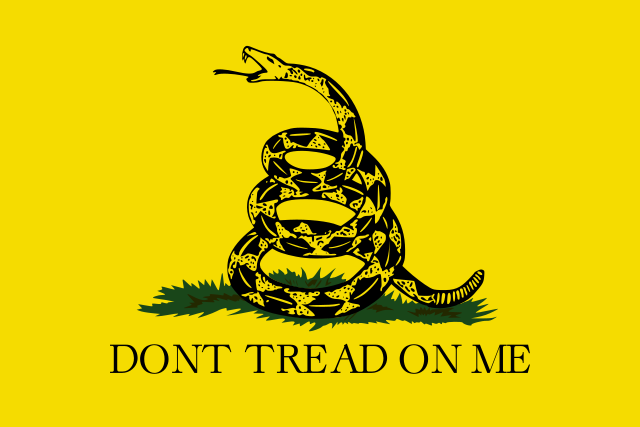 Yeah, don’t tread on me … but if you wouldn’t mind, those other people over there need to be trod upon…. (Image: “The Gadsden flag,” on Wikimedia Commons.)

The government offers us choices of who we might select as our favorite bully. It might be the legislature, since they pass laws that make other people do things that we want them to (or stop them from doing what we don’t like). Or it could be the judiciary, since their decisions can amount to much the same thing. We might choose the executive, since they enforce laws and may do so in our favor. Or it may be the police, because they keep all those lawbreakers and ne’er-do-wells in line.

Or perhaps our favorite bully is closer to hand, like our supervisor or plant manager or CEO — if we’re one of their favored employees. Maybe we ally ourselves with someone at work or church or the gym who has some degree of “informal” power, and they become the bully on our side. Or maybe we choose the mob: not the capital-m Mob of organized crime, but the gang around us — the school clique, the workplace cronies, the neighborhood crowd, the thinks/acts/looks like us mob that comes together at opportune times to make our wishes and even our demands known and strives to make them come to pass.

It could be that our favorite bully isn’t a person at all. It might, for instance, be the Bible, if we use it to tell other people — whether or not they share our faith — how they should act. (For the record: From what I can tell, if we try to make the Bible’s guidelines apply to nonbelievers, we’re wrong.)

How refreshing it would be if we would admit liking when government officials enforce the laws we approve, especially when those laws apply to other people, or when the government fails to enforce laws we despise (that usually apply to us).

We may be reluctant to admit that because we know it’s no fun being bullied. Maybe we don’t have a favorite bully, and don’t cheer when authorities and powers-that-be start bullying others — even if we approve of the result. Maybe we’re rather more libertarian than we usually think; it does seem that in many respects the lowercase-L libertarians have the right handle on the overall “live and let live” approach. And even if we’re not very libertarian-minded, we may sympathize a little with those on the opposite side since we know what it’s like to be coerced.

We may prefer not to consider all this to be bullying, although our ends — especially if we think of them as pure and noble — can justify all manner of different means. And in pursuit of those ends, even if we don’t call them by name or like them very much we still turn our bullies loose on those we think should do things to our liking. And if those other people complain or disagree, that’s fine — as long as they still comply.

We despise the other side’s bullies, of course, who stand ready to force us to do what we would rather not. But when we believe our way is the only right way, and we’re so dead set on getting our way that we will countenance force (or, pressure) to achieve it, we need our bullies. We may not love them, but we’re willing to rely on them.

As long as we’re convinced they’re really on our side.