May Day was very good to me! For the first time in my writing career, I received two short story contracts on the same day.

The contracts are signed and will shortly be in the mail, so I feel as if it’s safe to broadcast the details.

After a minor rewrite a couple of weeks ago, Asimov’s Science Fiction Magazine accepted my novelette “The Second Engineer.” I posted news of the story acceptance on Facebook, but didn’t identify the magazine because I didn’t want to get ahead of the paperwork. So yesterday the contract showed up in my e-mail …

… along with a contract from Analog Science Fiction & Fact for my novelette “SEAGULLs, Jack-o-Lanterns, and Interstitial Spaces.”

So on the same day I got contracts for my second story for Asimov’s and my third story for Analog. My head is still spinning.

On a Related Subject: My short story “The Song of Uullioll” is in the July/August issue of Analog Science Fiction & Fact, which has been mailed to subscribers and should be on newsstands soon. (I’ll post the cover when I get the image file for my web site.)

P.S. I understand “The Second Engineer” is scheduled to appear in the October/November issue of Asimov’s. GWR

My near future military science fiction short story “Sensitive, Compartmented” is in the April/May double issue of Asimov’s Science Fiction magazine. Subscribers have been sent their copies (at least, I got my subscription copy), so it should show up on newsstands and the web site soon.

(Look for this cover to get my latest short story.)

Also, this weekend I’ll be a guest at StellarCon in High Point, NC. StellarCon is sponsored by the Science Fiction Fantasy Federation of UNC-Greensboro, and this year’s Guest of Honor is bestselling author Patrick Rothfuss.

Here’s what I’ll be doing at the Con: Okay, technically I didn’t “find” it — Google Alerts did its job and told me about it — but never mind that: one of my stories is now on audio!

“Memorial at Copernicus” is an alternate-history story that occurs on the Moon, and was my first story to be considered a “professional” sale. It originally appeared in the third issue of Redstone Science Fiction, in August 2010.

And now it’s also the first of my stories to ever be recorded. New Zealand author Amanda (AJ) Fitzwater recorded the story, and I’m especially pleased with how well she rendered the main character’s Russian accent.

You can find the audio story on Redstone Science Fiction’s audio page or by this direct link: “Memorial at Copernicus” audio.

And, while I’m at this, I think I’ll throw in a look at the cool cover art from that RSF issue: 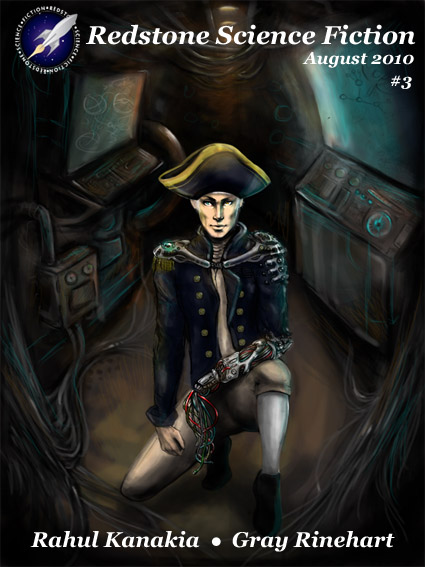 One last thing: I find it a little odd that no one from the magazine told me this was happening [cough, cough]. But, it’s still pretty cool. A few new books that have come to my attention, that I’d like to bring to yours …

Over at New Scientist, there’s a review of a new book about actress Hedy Lamarr, who invented the frequency-hopping and spread-spectrum techniques that made Milstar satellite communications secure … and that make WiFi and other modern communications possible.

My commander at the 4th Space Operations Squadron, where I “flew” Milstar satellites, called Ms. Lamarr the “mother of Milstar” because of her invention. This new book sounds as if it captures not only the essence of her invention but also the trouble she ran into as a movie star who also happened to be a first-rate thinker.

Meanwhile, my writing friend Edmund Schubert has a new short story collection out entitled The Trouble with Eating Clouds.

Ed’s stories are very entertaining, often thought-provoking, and sometimes a little quirky. You might already have guessed that from the title, if not from the striking cover art, but I figure there’s no harm in stating the point.

And speaking of short stories, the folks behind Crossed Genres magazine (which published my story “The Tower” in one of their quarterlies) have brought out an anthology entitled Subversion, which they describe as “science fiction & fantasy tales of challenging the norm.”

Of course, ’tis the Season: if you know someone who might enjoy one of these books, now you can satisfy their Christmas wishes.

Hey, blogosphere and Facebook folks: YOU can help me fulfill my solemn duty to the Science Fiction & Fantasy Writers of America!

It’s “award season,” and this will be the first time I’m able to nominate and vote for the Nebula Awards.

I’m pretty excited about being able to take part in the Nebula voting: It feels good to be able to participate in this professional ritual. Plus, my writing friends Eric James Stone and Rachel Swirsky won Nebulas last year, and I’ve enjoyed several of the award-winning novels of recent years.

Problem is, I don’t get to do a lot of reading for pleasure. I’ve collected together all of my 2011 issues of Analog, Asimov’s, Bull Spec, Realms of Fantasy, etc., to go through them, but I’m also looking for suggestions. What else should I read, in hopes that I’ll enjoy it enough to nominate it?

Some of my writing friends have sent me their eligible work,* but if you read — or wrote — a novel or story that was published this year that you think I should consider, let me know about it!

I have until mid-February to submit my nominations, but the sooner I get suggestions the more time I’ll have to read the stories.

And if you haven’t read any good books or good stories lately, WHY NOT?

___
*And a few of them are also kindly reading my eligible novelette: “Therapeutic Mathematics and the Physics of Curve Balls,” from the September Analog.

Meet the newest Active member of the Science Fiction & Fantasy Writers of America: me.

It’s nice to check that off the “writing career” list —

— especially as my entry into SFWA was a little unconventional. I originally joined as an Affiliate member, based on my work with Baen Books, since I hadn’t yet made any qualifying sales of my fiction. Even my first professional-level story, “Memorial at Copernicus,” didn’t qualify me for Associate membership because Redstone Science Fiction was too new and had not yet been recognized as a professional market.

Of all the professional organizations I’ve joined at various times in my life (e.g., Air Force Association, American Society for Quality Control [now just ‘ASQ’]) SFWA’s entrance qualifications were the hardest to meet. Now that they’ve let me in, I’m reminded of the Groucho Marx bit — wondering if I should be leery of joining a group that would have me as a member — especially as I feel more like a lucky hack than a professional. Maybe it’s something I have to live up to.

Of course, this doesn’t mean much in the grand scheme of things. To paraphrase one of my parents’ favorite sayings, to account for inflation and personal preference: that and a buck will buy me a diet soda.*

So, on to the next thing: finishing the next story.

___
*Even though “That and 50 cents will buy you a cup of coffee” sounds better, since I don’t drink coffee I’m not sure how many places still sell it for 50 cents.

I’ve mentioned this before in other contexts, but now that I’ve signed the contract it feels more real: my short story “Sensitive, Compartmented” is slated to appear in Asimov’s Science Fiction Magazine.

They currently plan to run the story in the April/May 2012 double issue.

For those of a military or Intelligence Community bent, the title should be suggestive. But not only in the way they might think.

I’m very pleased to announce that I’ve signed the contract for my second sale to Analog Science Fiction & Fact. My story, “The Song of Uullioll,” should appear, I think, in the first half of 2012.

It was surreal when my first Analog story was published this past year. It’s even more surreal that I have stories slated for publication next year in the two biggest science fiction magazines, Analog and Asimov’s Science Fiction.

This is a nice dream I’m living.