A cheery thought for All Hallows Eve, eh?

Actually, the headline was my reaction to seeing the title of this New Scientist article, “Climate change will kill millions but you knew that already” —

“This is the major health threat in the 21st century around the world, and there’s an urgent need for us to address it,” says Hugh Montgomery of University College London, co-chair of the consortium that produced the report, called The Lancet Countdown on Health and Climate Change.

But if we work harder to switch to clean energy sources, we’ll likely see huge health improvements, the report says. 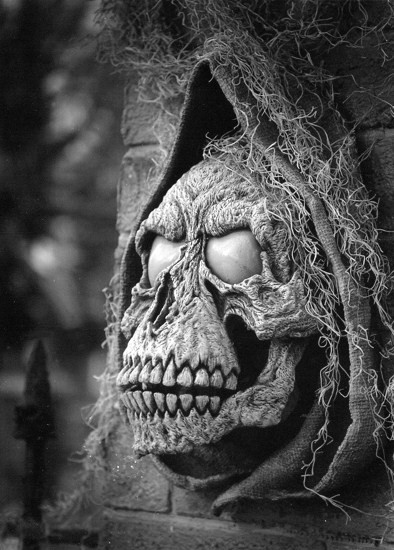 (Image: “Death,” by Robert, from Flickr on Wikimedia Commons.)

The whole thing sounds like idealistic wishful thinking that imagines the status quo as something that has always been in place and that should continue to operate indefinitely, when the historical truth is that change — beneficial as well as detrimental — is the way of things. The natural systems in which we live are dynamic, not static, and the pressure we apply to keep one part steady is likely to produce other changes we have not anticipated. And Death waits for us all.

So the greater question, it seems to me is: what are we doing with our lives?

Nearly everyone who has studied science knows the name “Lord Kelvin,” if only for the absolute temperature scale which bears his name. William Thomson, 1st Baron Kelvin (26 June 1824 – 17 December 1907) was a physicist and engineer from Belfast, Ireland, who did foundational work in thermodynamics and electricity at the University of Glasgow in Scotland. He was knighted by Queen Victoria in 1866 for his contributions to the transatlantic telegraph. In 1892 he was the first British scientist to receive a noble title and a seat in the House of Lords. As noted above, “Kelvin” was part of his title, rather than his actual name; it referred to a river which flows by the University of Glasgow.

In 1883, when he was still Sir William Thomson, he gave a lecture on “Electrical Units of Measurement” in which he said,

This quote is nicely precise, as we might expect of a 19th century man of science. As such, it contrasts with one of the pernicious lies of modern management that still traps well-meaning but poor-thinking people today: specifically, the idea that “you can’t manage what you can’t measure.” That quote is often (but wrongly) attributed to Peter Drucker, and it may be that no one knows who originated it. But it is, as Dr. W. Edwards Deming frequently pointed out in his seminars, a myth.

The truth is, every day we encounter situations involving variables that we cannot measure. Sometimes they are things that could be measured if we had sufficient instruments and time to devote to the effort; sometimes they are things that are ineffable, and for which devising a measurement would be folly. We still have to manage those situations and navigate our way through them; we cannot throw up our hands in despair simply because the situation did not come with a convenient set of measurements and statistics attached to it.

Sometimes the people who proclaim that measurement is necessary to management are in the business of selling measurement practices or techniques. And they may take advantage of managers who have never had to measure things in the real world. Those managers would do well to apply a little skepticism and heed the words of William Bruce Cameron, who said in the 1958 article “Tell Me Not in Mournful Numbers,”

Counting sounds easy until we actually attempt it, and then we quickly discover that often we cannot recognize what we ought to count. Numbers are no substitute for clear definitions, and not everything that can be counted counts.

Often when managers decry the lack of measurements to justify the decisions they wish to make, they do so without any real appreciation for the difficulty of measuring things with accuracy and precision. Their bathroom scale works, though they may not like what it reports; the gauge in their car indicates its fuel status with some reliability; these and other experiences lead them to expect to receive similar reports of progress or status on whatever aspect of the business is under their scrutiny that day.

Which brings us back to Sir Thomson, Lord Kelvin, and his observation about measurement. He wisely allowed for the possibility of not being able to measure something — thus, that late 20th century management aphorism, whatever its source, was invalidated roughly a hundred years before it was spread! While he then said that our knowledge of a thing may be stunted by lacking measurements for it, that does not mean we have no knowledge of it at all; even “the beginning of knowledge” is knowledge of a sort. But what was Kelvin’s interest in measurement? Was it management? No! It was science.

And, though managers may like to claim otherwise, management is not science.

(Image: JPL imagery from the Jason-2 satellite, showing “Kelvin Waves” — named after Lord Kelvin, who discovered them — moving eastward along the equator.)

That’s all I have to say on the subject, at the moment, but I’d be happy to discuss it at length if you like. Meanwhile, I hope you have a good week!

___
P.S. Last week I mentioned possibly ending this series, and I’m still undecided on that point. Let me know if you have feelings about that, one way or another.

Today is British physicist Paul Dirac’s birthday (8 August 1902 – 20 October 1984). Dirac shared the 1933 Nobel Prize with Erwin Schrodinger, and is known as one of the founders of quantum physics.

Dirac was a rather famous atheist — his colleague Wolfgang Pauli was said to have remarked, “Our friend Dirac, too, has a religion, and its guiding principle is ‘God does not exist and Dirac is His prophet'” — but later in life he wrote a quite eloquent statement about God and the mathematical relations that describe our universe. In a piece in the May 1963 issue of Scientific American entitled “The Evolution of the Physicist’s Picture of Nature,” he wrote (emphasis added):

It seems to be one of the fundamental features of nature that fundamental physical laws are described in terms of a mathematical theory of great beauty and power, needing quite a high standard of mathematics for one to understand it. You may wonder: Why is nature constructed along these lines? One can only answer that our present knowledge seems to show that nature is so constructed. We simply have to accept it. One could perhaps describe the situation by saying that God is a mathematician of a very high order, and He used very advanced mathematics in constructing the universe. Our feeble attempts at mathematics enable us to understand a bit of the universe, and as we proceed to develop higher and higher mathematics we can hope to understand the universe better.

Are we to conclude that Dirac, who in 1927 said, “If we are honest — and scientists have to be — we must admit that religion is a jumble of false assertions, with no basis in reality. The very idea of God is a product of the human imagination,” found God in later life? Did something in the nature of quantum mechanics point him toward the divine? 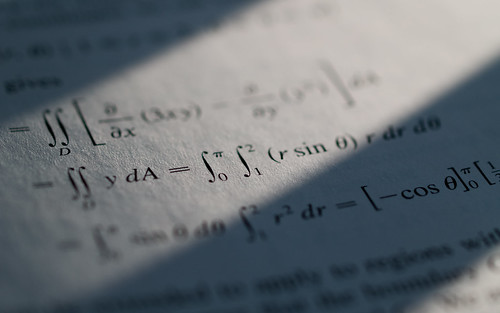 The language of mathematics … it’s more than a little Greek. (Image: “The Beauty of Mathematics” by Peter Rosbjerg, from Flickr under Creative Commons.)

It would seem not. Instead of coming to believe in the existence of God, Dirac accepted the possibility of God’s existence, and even the necessity of God in certain circumstances:

I would like … to set up this connexion between the existence of a god and the physical laws: if physical laws are such that to start off life involves an excessively small chance, so that it will not be reasonable to suppose that life would have started just by blind chance, then there must be a god, and such a god would probably be showing his influence in the quantum jumps which are taking place later on. On the other hand, if life can start very easily and does not need any divine influence, then I will say that there is no god.

That’s an interesting idea, though I wonder (a bit playfully, perhaps) if the physical laws of our universe are such that to produce a Paul Dirac (or a you, or a me) involves “an excessively small chance.” There have been, after all, only one of each of us in all the universe.

Even as powerful a mind as Dirac’s could not solve all the equations of the universe, and I certainly can’t. So I am content to let God be God and handle the beautiful and mysterious mathematics of creation.

Did you do a good turn today? If you feel compelled sometimes to do something particularly altruistic, you may have a particularly well-developed amygdala. 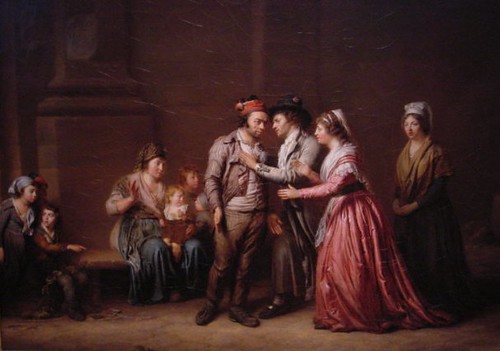 (Painting, “A Good Deed Is Never Forgotten,” by Pierre Nicolas Legrand (1758-1829), in the Dallas Museum of Art. Image by Rodney, on Flickr under Creative Commons.)

Researchers at Georgetown University have been delving into the brains of people who are particularly altruistic — even studying people who have donated kidneys to complete strangers — as noted in The Biology Of Altruism: Good Deeds May Be Rooted In The Brain. Using functional MRI scans, principal investigator Abigail Marsh examined the structures of their brains and their brain activity while they took tests and looked at specific images. For example, they showed subjects “pictures of different facial expressions, including happiness, fear, anger, sadness and surprise.”

Most of the tests didn’t find any differences between the brains of the altruistic donors and the people who had not been donors. Except, Marsh says, for a significant difference in a part of the brain called the amygdala, an almond-shaped cluster of nerves that is important in processing emotion.

The more we learn about the brain, the more remarkable it is! This finding makes sense to me, since altruism depends, at least in part, on the ability to imagine oneself in another person’s dire circumstances, and then to act to change those circumstances.

I found this part particularly interesting:

These findings are the polar opposite to research Marsh conducted on a group of psychopaths. Using the same tests as with the altruists, Marsh found that psychopaths have significantly smaller, less active amygdalas. More evidence that the amygdala may be the brain’s emotional compass, super-sensitive in altruists and blunted in psychopaths, who seem unresponsive to someone else’s distress or fear.

So if altruism is your default state, it may be because you have a very active amygdala — a highly tuned “emotional compass.” And for those of us who are not very altruistic, it may be that we have some traits in common with … psychopaths. That’s not the most comforting thought, but perhaps this will help: Aristotle taught that we become virtuous by developing and practicing the habit of being virtuous, and we have the Golden Rule (e.g., Matthew 7:12) as one guideline we can use as we do so.

So, do a good turn today!