Twenty-five years ago today — July 29, 1985 — the Space Shuttle Challenger lifted off from Kennedy Space Center on mission STS-51F. During the launch, the number one main engine shut down ahead of schedule; NASA declared an “Abort To Orbit,” but was able to re-plan the mission to complete all of its objectives.

(Of personal interest: When we were stationed at Edwards later in the 80s, General Bridges was the AF Flight Test Center commander. We only met him a couple of times, but his son was part of the Protestant Youth of the Chapel group we helped lead.)

Now, for those space history tidbits:

On July 29, 1955 — 55 years ago today — the White House announced the upcoming International Geophysical Year (IGY), for which the U.S. planned to launch a satellite. As you know, the Soviets’ Sputnik beat us to it.

Around this date 50 years ago — one source said July 29, another July 28 — NASA announced that the program aimed at the moon would be named “Apollo.” The name had actually been suggested six months earlier by NASA engineer Abe Silverstein. (Note that this was before President Kennedy was elected, and therefore long before he announced his support of the lunar landing program.)

Finally, on this date 50 years ago — July 29, 1960 — the first unmanned Mercury launch was attempted from Cape Canaveral. Mercury-Atlas-1 (MA-1) exploded at about eight miles altitude. We still had a long way to go.

Fifty years ago today — June 22, 1960 — a Thor rocket launched from Cape Canaveral and, for the first time ever, put two payloads into two different orbits. This launch set the standard for many multiple-launch missions to come. The rocket carried a Transit-2A navigation satellite and the Solrad-1 solar observation satellite.

Transit-2A was the newest in a series of navigation satellites put into orbit by the U.S. Navy. The Transit system proved that satellite navigation was possible, and set the stage for today’s Global Positioning System.

Solrad-1 was the other “first” scored by this launch.

Solrad-1 was also known as GRAB, the Galactic Radiation and Background satellite. Built by the Naval Research Laboratory, GRAB was the nation’s first reconnaissance satellite. As noted on this page, GRAB collected electronics intelligence on Soviet radar systems.

(The SPARTAN-1 science package in the cargo bay during mission STS-51G. NASA image.)

The STS-51G crew’s “triple play” involved launching three separate communications satellites during this one mission. They deployed the Mexican satellite Morelos-A on the 17th, the aptly-named Arabsat-IB satellite on the 18th, and finally Telstar-3D on the 19th.

The crew also released the SPARTAN-1 (Shuttle Pointed Autonomous Research Tool for Astronomy) on the 20th. Its X-ray instruments made observations of the center of the Milky Way, as well as of the Perseus cluster of galaxies. The crew retrieved SPARTAN-1 from orbit on the 24th, just prior to their return to Earth.

Fifty years ago today — April 13, 1960 — the first navigational satellite was launched from Cape Canaveral on a Thor Able-Star booster.

Called Transit-1B (the 1A spacecraft had been lost in September 1959 when the launch vehicle’s third stage failed), the small spin-stabilized Navy satellite and its later companions proved the feasibility of using satellite signals for geolocation. Transit paved the way for the Global Positioning System we know today.

Forty-five years ago today — April 6, 1965 — the “Early Bird” satellite (also known as Intelsat-1) was launched by a Thor-Delta rocket out of Cape Canaveral. 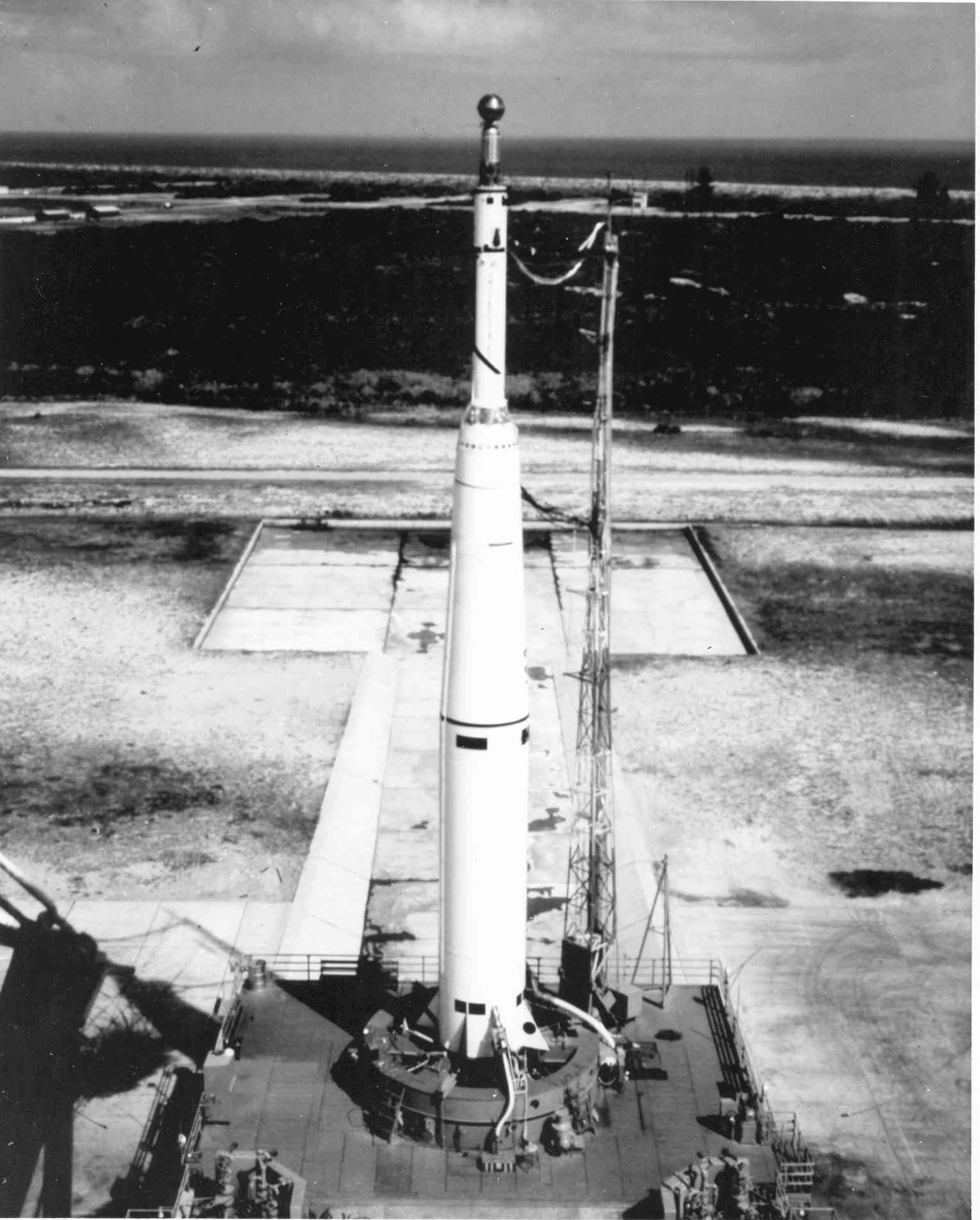 Placed in geosynchronous orbit over the Atlantic Ocean, Early Bird was the first commercial communications satellite. It operated for three and a half years, and was the precursor to the dozens of spacecraft providing global communications today.

For more information, see this short history of communication satellites.

Fifty years ago today — April 1, 1960 — TIROS-1 (Television and InfraRed Observation Satellite 1) was launched on a Thor rocket from Cape Canaveral.

TIROS-1 was the first weather satellite, and transmitted the first television images of the Earth from space. It only operated until the middle of June 1960, but during that time it sent back thousands of images and proved the feasibility of global weather observation from space.

In related non-news, TIROS-1 was mentioned by President Kennedy in his “we choose to go to the moon” speech at Rice University in September 1962. And many years later, yours truly wrote TIROS-1 into a much less important speech for one of his bosses in the Pentagon.

the instrument may have been saturated by very strong radiation from a belt of charged particles trapped in space by Earth’s magnetic field. The existence of these radiation belts was confirmed by another U.S. satellite launched two months later, and they became known as the Van Allen Belts in honor of their discoverer.

During its lifetime, Explorer-1 orbited the Earth over 58,000 times and traveled 1.66 billion miles (2.67 billion kilometers).

Before we get into today’s space history, a “quote of the day” from last night’s small group Bible study. As we were gathering, Maria grabbed one of our STAR TREK coffee mugs for Elliott, so I mentioned that ReConStruction, the North American Science Fiction Convention (NASFic) is coming to Raleigh in August. True to the nature of our science fiction church, Elliott said, “If that’s not a church trip, I don’t know what is!”

Yes, we’re geeks. But you already knew that, didn’t you?

Back to the topic at hand, an interesting launch 40 years ago in space history. On January 23, 1970, a Delta rocket out of Vandenberg AFB carried two satellites, ITOS-1 and Oscar-5.

ITOS-1 was the first prototype of the “Improved TIROS Operational System” — that is, a new and improved version of the remote sensing satellite featured in yesterday’s space history item. ITOS-1 was built “to provide improved operational infrared and visual observations of earth cloud cover for use in weather analysis and forecasting.”

Oscar-5, on the other hand, was an amateur spacecraft built by students at the University of Melbourne, Australia. It has the distinction of being the first remotely-controlled amateur micro-satellite.