Forty years ago today — August 9, 1969 — an LTTAT-Delta rocket launched from Cape Canaveral carrying the sixth Orbiting Solar Observatory (OSO-6). According to the National Space Science Data Center, “OSO 6 was the sixth in a series of satellites designed to conduct solar physics experiments above the earth’s atmosphere during a complete solar cycle.” The spacecraft operated successfully until the end of 1972.

One curious thing: the first source on which I found the OSO-6 anniversary said it launched from Vandenberg Air Force Base. Just goes to show, you can’t believe everything you read on the Internet.

Oh, and LTTAT-Delta refers to a “long-tank thrust augmented Thor-Delta,” which started launching in 1968 and made many successful launches according to NASA.* In case you were wondering.

___
*Yes, some other Internet sources contradict this. So pick the source in which you have the most trust.

Lots of interesting July 20th space history (even though I only concentrate on anniversaries in multiples of 5 years).

(View of Earth from lunar orbit, prior to the [I]Eagle‘s landing. Click to enlarge. NASA image from the Apollo-11 Image Gallery.)[/I]

Forty-five years ago today, in 1964, the Space Electric Rocket Test (SERT-1) launched on a suborbital test flight from Wallops Island, Virginia. The vehicle tested electron bombardment ion engines. (I find this interesting because Area 1-14 at the Air Force Rocket Propulsion Lab [my first assignment in the USAF] tested electric propulsion concepts and, I believe, some ion engines. Ion thrusters are used for stationkeeping on many different spacecraft.)

And for terrestrial history with a connection to space, ten years ago today, in 1999, the Liberty Bell 7 spacecraft was pulled up from the bottom of the Atlantic Ocean, about ninety miles northeast of Great Abaco Island in the Bahamas. Astronaut Virgil I. “Gus” Grissom had flown in the Liberty Bell 7 on our country’s second manned spaceflight. (I find the retrieval particularly interesting, since my first project in the Titan System Program Office was to find and retrieve pieces of a failed Titan-IV rocket so the investigators could confirm the cause of the malfunction.)

Of course not. I’m actually pleased with the attention being paid to the 40th anniversary of the Apollo-11 landing, with dedicated sites like We Choose the Moon — and today is the day. 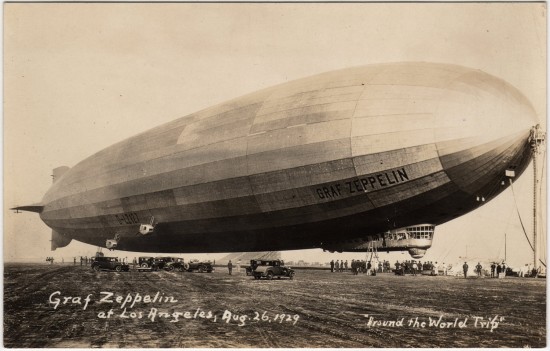 (Buzz Aldrin and the U.S. flag. Click to enlarge. NASA image from the Apollo-11 Image Gallery.)

Forty years ago today, in 1969, the Lunar Module Eagle landed on the moon in the first manned lunar landing. Astronauts Neil Armstrong and Buzz Aldrin prepared to step out on the lunar surface, while Michael Collins orbited in the Command Module Columbia. A few hours later — at 10:56 p.m. Eastern Daylight Time, which was 2:56 a.m. Greenwich Mean (Universal) Time — Armstrong and Aldrin stepped onto the moon.

I dream about the giant leaps.

Fifteen years ago today — July 18, 1994 — fragment G of comet Shoemaker-Levy 9 comet hit the planet Jupiter. Pieces of the comet had started impacting the gas giant on July 16, and continued to bombard it until July 22.

(Hubble Space Telescope images of the Shoemaker-Levy “Fragment G” impact. The bottom image shows the plume about 5 minutes after impact on July 18, 1994, and the next shows the “fresh impact site” about 90 minutes later. The upper images show the evolution of the impact area over the next few days due to Jupiter’s winds. NASA image from http://www2.jpl.nasa.gov/sl9/hst.html.)

In other space history, which I didn’t post yesterday because it was a crazy busy day:

Eighty years ago yesterday — July 17, 1929 — Dr. Robert Goddard launched a liquid-fueled rocked in Auburn, Massachusetts. The vehicle carried a small camera, a thermometer, and a barometer, and actually generated publicity about a possible “moon rocket.”

It only took forty years before men were on their way to the moon on the same date. Pity that we haven’t made similar progress since.

And 25 years ago yesterday — July 17, 1984 — Soyuz T-12 launched from the Baikonur Cosmodrome to carry Vladimir A. Dzhanibekov, Svetlana Y. Savitskaya, and Igor P. Volk to the Salyut 7 space station. A few days later, Savitskaya would become the first woman to conduct a spacewalk.

Forty years ago today — July 16, 1969 — Neil A. Armstrong, Edwin E. “Buzz” Aldrin, and Michael Collins launched from the Kennedy Space Center aboard a Saturn V booster (number SA-506) on Apollo-11, the first manned mission to land on the moon.

I’m not old enough to remember President Kennedy and his bold proposal to land men on the moon and return them safely to earth. I wish I remembered more about the lunar landings as they happened, but memory is a fickle thing and my childhood memories are fleeting at best.

Thankfully I have access to the Internet to augment my memory. From one of the NASA history sites, here’s a list of the firsts accomplished by Apollo-11:

If you want to learn more, NASA’s Human Space Flight Office has a good web page about Apollo-11, and the “We Choose the Moon” site is a nifty interactive tribute to the mission.

I don’t know if it’s because of the Apollo program and the space enthusiasm that permeated the country when I was young, or because of STAR TREK, Robert A. Heinlein, Larry Niven, and the many science fictional adventures I enjoyed, but when I look at the moon I still want to go there, live there, explore and build there. And since I can’t do that in real life, I do it in my imagination and in my stories — even if only I and a few friends will ever enjoy them.

So Godspeed, Apollo-11, and thanks.

Five years ago today — July 15, 2004 — NASA’s Aura spacecraft launched on a Delta-2 rocket from Vandenberg Air Force Base. Aura carries sensors designed to study atmospheric chemistry and dynamics, e.g., changes in ozone. You can learn more about the Aura mission at this NASA page, and also at this NASA (Goddard Space Flight Center) page. (Aura spacecraft in the high-bay. Note the spreader bar at the top and, for scale, the people at the bottom. NASA photo from the Aura spacecraft gallery.)

Speaking of launches, congratulations to the SpaceX team for successfully launching their Falcon-1 booster on its first commercial mission yesterday. They put a Malaysian remote imaging satellite into orbit, and from all accounts did a good job of it. Here’s the Spaceflight Now story about the launch.

And speaking of launches, today is the eve of a very special space anniversary … which we of course plan to cover in a blog entry tomorrow.

As someone who a) loves to look up at the bright, shining moon, and b) has written two novels about life at a lunar colony,* I naturally answer “yes.”

New Scientist apparently agrees, in its commemorative series of articles entitled “Why the Moon Still Matters.” This month, if you didn’t already know, is the 40th anniversary of the Apollo-11 lunar landing. As you might imagine, that’s a big deal to the likes of me.

In related news, here’s a Spaceflight Now article about NASA’s preparations for launching the Ares X-1, which will become the country’s “new moon rocket.”

So, to repeat: yes, I think the moon matters.

___
*The first one, like so many first novels, was not worthy of being published. I thought it was, and so did a very small publisher, but that’s a story for another day. The second one, WALKING ON THE SEA OF CLOUDS, is making the submission rounds now. I think it’s a much better book, so here’s hoping….

Today the LCROSS (Lunar CRater Observation and Sensing Satellite) is supposed to launch on an Atlas-V rocket, along with the LRO (Lunar Reconnaissance Orbiter). LCROSS is specifically designed to check for water in shadowed craters at the lunar south pole. 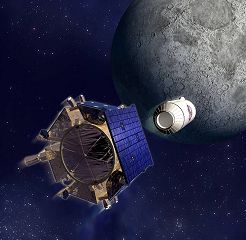 (Artist’s conception of LCROSS approach to the moon, from http://lcross.arc.nasa.gov/. Click to enlarge.)

The mission profile involves crashing the Centaur upper stage into an as-yet-undetermined crater, with the LCROSS vehicle and its sensors following close behind. Not only will LCROSS itself examine the ejecta for signs of water, but the debris from the impact is expected to rise high enough above the moon’s surface to be visible to earth-based instruments as well. Analysis should show whether hydrogen detected by previous missions (e.g., Clementine) is in the form of water.

Why does this demonstrate the hazards of writing near-future SF? Because I know of a novel — written by me, for which I’m trying to find a publisher and an agent — in which a major part of the plot is a difficult journey to the lunar south pole to retrieve ice to keep the fledgling colony alive.

The LCROSS mission could either lend credence to my treatment of lunar conditions, or it could make the novel much more fiction than science. So here’s what I would like:

Such is the hazard of writing realistic, near-future SF — your assumptions may be subject to verification before your story ever sees print! (Here I repeat my hope that my story will indeed see print. Time will tell. But if you know of a publisher looking for such a story, point them my way!)

If you want more info, here’s the NASA page about the mission.

And, how about a little space history: Five years ago today — June 18, 2004 — marked the first time a U.S. astronaut was in space when his child was born on Earth. Edward Michael “Mike” Fincke was aboard the International Space Station when his wife gave birth to their second child.

Thirty-five years ago today — June 3, 1974 — Explorer-52 launched from Vandenberg Air Force Base, California, aboard a Scout rocket. Built by the University of Iowa, the satellite was also known as Hawkeye-1.

The primary mission objective was to conduct particles and fields investigations of the polar magnetosphere of the earth out to 21 earth radii. Secondary objectives were to make magnetic field and plasma distribution measurements in the solar wind, and to study Type-3 radio emissions caused by solar electron streams in the interplanetary medium.

And now you know.

Since the satellite was launched into a polar orbit, I have to believe the Thule Tracking Station — callsign POGO, which I commanded for one year of my Air Force career — downlinked at least some of the data from it. That was many years later than this launch, of course, so it’s not much of a connection … but I’ll take what I can get.

Fifty years ago — on this date in 1959 — a Jupiter rocket lifted off from the Eastern Space and Missile Center at Cape Canaveral, carrying two female monkeys, “Able” and “Baker.” Able was a seven-pound rhesus monkey and Baker was a squirrel monkey that weighed less than a pound. The monkeys traveled 1700 miles downrange, reached an altitude of 360 miles, and survived “in good condition.”

In our second item, a Saturn rocket — designated SA-6 — launched from Cape Canaveral on this date in 1964. The unmanned launch tested the rocket and spacecraft components for the Apollo mission to the moon. It did not, however, carry any monkeys.

You can read more about Able and Baker on this Smithsonian page or in this NPR article.

Thirty-five years ago today — May 17, 1974 — a Delta rocket lifted off from Cape Canaveral carrying SMS-1, the Synchronous Meteorological Satellite-1. It was a weather satellite prototype, the first in geosynchronous orbit.

Thought you ought to know.

If you want to know more, here’s the NASA catalog description of SMS-1, and here’s a page about the history of satellite meteorology.