With a shout-out to my classmates who will be gathering for a multi-year reunion this weekend,* here’s my schedule for Dragon_Con 2014 — the largest science fiction and fantasy convention in the Southeast! — being held this weekend in Atlanta, Georgia. While I will be attending as many of my writing and musical friends’ sessions as I can fit into the schedule, I’m taking an active part in these events:

Meanwhile, here’s an interview with yours truly on Andrew McKee’s “Everything is Filk” Podcast. Hope you like it!

If you’re coming to the convention, I look forward to seeing you! But whatever you do this Labor Day weekend, I hope you have a terrific time!

___
*I started a rumor that they picked Labor Day weekend because I was already booked.

As a bit of insight into the economics of independent music publishing, this weekend I broke the 15% mark in terms of CD sales. To be precise, I reached the 17.15% point, which means that so far I’ve made back a little over 17% of the cost of recording, engineering, manufacturing, distributing, etc., the CD.

In other words, I’m still over 80% in the hole, almost a year after releasing the album.*

Maybe you didn’t even realize I had a CD out. In that case, at this link you can listen to all 10 songs of Truths and Lies and Make-Believe, which I call “a compendium of musical selections, inspired or influenced by science fiction, fantasy, life, and faith … a multitude of things.” If you decide to buy it, it’s $7 for a download or $10 — only $1 a song! — for a physical CD. (Though you can pay more, if you want to.)

So as I told folks at my concert this past weekend at ConGregate, if you’ve ever bought a copy of my CD, THANK YOU!

And if you like any of my songs, even a little bit, I’d be much obliged if you told a friend or wrote a review or otherwise helped spread the word.

And maybe next month I’ll crack the 20% mark!

___
*And yet I’m crazy enough to be thinking of starting to record a second one!

A week from today I’ll be at the inaugural — yes, the first-ever! — ConGregate science fiction and fantasy convention.

ConGregate has been put together by a wonderful team of experienced and talented convention organizers, so I anticipate it will start out as one of the best conventions going. I’ll actually be there all weekend and will be busy with a number of events, including a solo concert on Sunday morning where I will debut at least one new song:

As usual, I will have copies of Truths and Lies and Make-Believe as well as “Another Romulan Ale” bumper stickers. Should be a lot of fun — if you’re there, be sure to find me and say hello!

I have no idea who suggested it, but I appreciate whomever-it-was putting what is arguably my most popular song up for consideration during the “brainstorming” phase of the Pegasus Award cycle.

This does not mean that the song has been officially nominated, because the Pegasus Awards operate in three parts: first, the brainstorming; second, the nominating; and finally, the voting.

The nominating phase is open now, and folks may nominate up to five artists/songs per category:

As the main site says, “Anyone with an interest in Filking or Filk music can place a nomination and/or vote.” To nominate, use the handy nomination form. If you need ideas on what you might nominate, check out all the results of the Brainstorming Poll.

Again, thank you to whoever suggested me and my song for the award!

This weekend I’ll be one of the guests at the ConCarolinas science fiction and fantasy convention.

The Author Guest of Honor is the inimitable George R.R. Martin, so it’s no surprise the convention is sold out! I anticipate that it will be a madhouse.

I will be busy with a number of events …

I may be doing other things as well — perhaps a reading, I’m not sure — and of course there will be the usual hanging out with my various nerdy and geeky friends. And, if you’re there, I will have copies of a certain science-fiction-and-fantasy-related album as well as “Another Romulan Ale” bumper stickers!

If you’re there, I hope to see you!

And a live rendition, no less, performed as part of a podcast! (Tauntaun Rider Silhouette by Aaron Hynninen, a.k.a. azza1070, at azza1070.spreadshirt.com. Used by permission.)

This past Monday I was one of Samuel Montgomery-Blinn’s guests on a special “North Carolina Speculative Fiction” edition of Carolina Book Beat. Lex Wilson and I held down the first hour of the show, in which I performed a live version of “Tauntauns to Glory.”

You can read more about the podcast on this page, or listen at this link: Carolina Book Beat: Gray Rinehart, Lex Wilson, and Jen McConnel. “Tauntauns to Glory” gets introduced around the 17:30 mark.

And, of course, “May the Fourth be with you.”

P.S. To close out, here’s a shameless plug for the album that includes “Tauntauns to Glory.” Get it at Truths and Lies and Make-Believe. Tell your friends!

Today — Monday April 28th — I will be one of the guests on a special “North Carolina Speculative Fiction” edition of Carolina Book Beat.

I suspect we will talk about submissions and stories and such, and chances are good that there will be music of some sort involved ….

If you don’t live in the Research Triangle area, you can listen to the webcast at www.wcomfm.org. And I believe you can pick up the podcast here if you want to listen to it at your leisure.

Today is my last day on the Industrial Extension Service staff, and it seemed appropriate to mark the day with the first “workplace ‘filk'” I wrote there, simply entitled “The I-E-S Song.”

I started in January 2008 as primarily the speechwriter for the Executive Director, and I filled my time between speeches with other — primarily marketing-related — writing and editing assignments. But along the way I had the opportunity to do a few unique and interesting things:

Note that none of my work-related songs made it onto my album, Truths and Lies and Make-Believe. The audience for my music is already pretty small, but the audience for workplace songs in particular is tiny.

Anyway, I wrote a little rhyme to mark my departure, too.

It’s been fun
I had a good run
And now I’m done.

Now THERE’S a headline I never thought I’d write, and I get to do it courtesy of Dr. Demento! 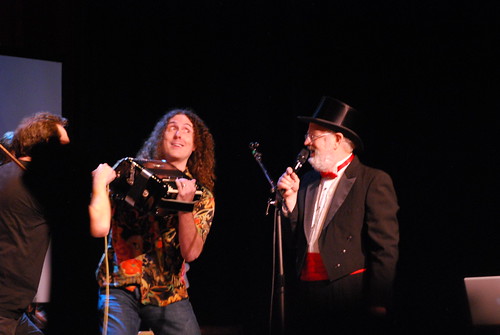 I felt as if I was levitating when I learned that two — not one, but TWO — of my songs had been played on The Dr. Demento Show since the beginning of the year. (Sure, since then other things have brought me down, but when I think about this it still puts a smile on my face.)

“Another Romulan Ale” seems like an appropriate song for New Year’s, and Dr. Demento played it on his first show of 2014. And, sure enough, Frank Zappa and “Weird Al” Yankovich were on the playlist — along with Cheech & Chong and Bob Dylan. Quite a group!

Then on the 1st of March the Dr. did a show focusing on music related to science fiction:

This week Dr Demento presents The History of Science Fiction in Song…from “Stardrek” and “Banned from Argo” to “Tauntauns to Glory” in 80 minutes…plus “We Won’t Give ‘Em Sex,” “Winestoned Plowboy,” “There’s a Baby On the Plane”, more.

Folks familiar with science fiction and fantasy music (a.k.a. “filk”) know that “Banned from Argo” is arguably the most famous filk song of all time. So it’s one thing for Dr. Demento to decide to play “Tauntauns to Glory,” but for him to list it in the show description in the same breath as “Banned from Argo” … that took this whole experience over the line into surrealism, even before I realized I was on the playlist again with “Weird Al,” this time plus Devo, Nat “King” Cole, Frank Hayes, and Leslie Fish.

If you like “Romulan Ale” or “Tauntauns” or some of the other songs from Truths and Lies and Make-Believe, and think Dr. Demento should play more of them, he has a song request form you can fill out. That would be cool, or I’d be much obliged if you would post a review on Amazon or iTunes or CD Baby or elsewhere. That would be awesome!

Meanwhile, as the Dr. would say, stay “deeeee-mented”!

Wow, it’s already been more than a week since MystiCon! I can’t keep track of the days these days.

Anyway, a couple of weeks ago I trekked northwest to Roanoke, Virginia, for MystiCon, which in just a few years has become one of the hottest small convention tickets in the Southeast. The 2013 convention sold out during the event, and the 2014 convention sold out before it even started!

All of my panels went well. Author Guest of Honor Todd McCaffrey led a half-dozen of us through a humorous “Delphic Oracle” exercise in which we had to formulate answers to the audience’s questions but each of us could only say one word at a time. The “Science of Star Trek” panel I moderated covered a vast array of real and imaginary technology, though I was disappointed that Media Guest of Honor John De Lancie had not been scheduled to join us.

My reading was enjoyable for me, and presumably for my audience since they did not run screaming into the hallways. I mixed a few songs with the opening of my story “Lightweaver in Shadow,” which will appear in a Baen Books anthology this November. The Baen Traveling Road Show went as expected, though I wished it would have had a look at the cover art for that anthology.

The Baen Barflies organized a little soiree in the ConSuite on Saturday night, and Speaker-to-Lab-Animals invited me to bring my guitar — so I debuted my new song, “The Books We Call Baen” (sung to the tune of “The Hero of Canton”). It went over pretty well, and I followed up with a couple other filk songs including “The Monster Hunter Ballad.”

I had time to take in a couple of panels, including a songwriting panel with Bella Morte, and enjoyed several conversations with friends old and new. Finally, I found Sunday’s self-promotion panel to be interesting and a bit liberating, since I still cringe from time to time whenever I veer too close to crass commercialization.

Speaking of crass commercialization … I also sold a few copies of my CD. So, all in all, a good trip and another resounding success for the convention staff. Great work, everyone!