(This is the fifth, and possibly last, entry in an on-again, off-again series. Links to the first four are at the end.)

Scripture tells us to “wait upon the Lord” — in Psalms, in the Epistles, and famously in Isaiah 40 — but how long we have to wait is up to the Lord alone. That point occurred to me when I realized that I’ve been thinking about the “Gift Church” (or “Gift Fellowship”) idea — i.e., of starting a church that would practice radical generosity — for nearly three years.

Sure enough, when I went back to check I saw that my first notes on it were in early March 2015. Over a few feverish weeks I searched Scriptures and drafted guidelines to flesh out the idea before I shared it with my Bible study group. We discussed it a few times, off and on, and I thought doing so would get it out of my system — but the idea had me in thrall.

Eventually, that October, I first wrote about it here on the blog in a post entitled “The Church I’d Like to Start: A Church that GIVES.” That was akin, I think, to crying out in the wilderness, but I didn’t actually do anything about it: I didn’t recruit people or organize interest meetings or whatever. I did put together a Facebook page and posted on it a few times, but I’ve since deactivated it. And as of now I haven’t written about it for nearly two years, outside of occasional Facebook comments.

But I can’t shake the vision.

Every so often I return to the idea and ask the Lord if I’m supposed to do something with it. I don’t think I’ve ever gotten a clear “No” — at least I hope I haven’t just ignored it — but neither have I gotten a definite “Yes.”

I keep asking for a sign, and I think I finally looked in the right place to find one. 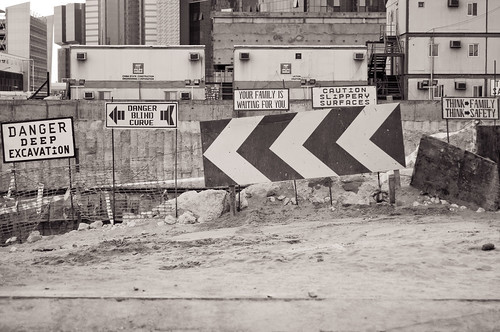 Wouldn’t it be great to have a single clear sign? Alas, it doesn’t always happen … so we wait. (Image: “Your Family is Waiting for You,” by Christian Senger, on Flickr under Creative Commons.)

What sign have I been given? Simply that the Lord has not prompted anyone to partner with me. A few people have expressed mild interest in the concept, but that’s about it. No one else has had the same or a similar vision, and unless someone does I’ve decided that I need to give up this thought, this dream, this notion. (From a practical standpoint, of course, I suppose you could say I gave up — or gave up on — the notion long ago.)

Partnership is important to me because as I was studying the Scriptures, thinking about how such a church might govern itself, I focused on the fact that Jesus sent out the Disciples in pairs (as recorded in Luke 10), and that Paul always traveled with a ministry partner. Partnership offers support when times are difficult; provides for accountability to ensure vital tasks get done; and makes it less likely that a ministry will serve the minister’s ego more than the people or cause at which it is directed. I’ve come to believe that no ministry should operate except in partnership, and so I’ve put this ministry idea on indefinite hold.

And I’ve come to accept that no one else may ever catch this vision.

I may be the only person dissatisfied with the state of the church these days. Not so much the trappings of church, the worship or preaching or fellowship: the various churches I’ve attended recently haven’t satisfied my spiritual hunger, but that may say more about me than it does about them. No, I remain disheartened by the operations of churches that spend so much money on themselves — even going into massive debt like so many of the rest of us — that they spend relatively little on helping people. I wonder if it ever bothers their congregants to spend more every year on church programming, or more on utilities and maintenance of buildings that stand empty and unused most of the time, than they spend to feed the hungry or clothe the naked. I wonder if they even think about it.

When I was young, the Moderator of the Church of Scotland came to my hometown and spoke at my church. I recall two things about that Sunday. First, before the offering he prayed: “Lord, forgive us when we come before You with empty hearts, and empty hands.” That admonishment affected me deeply, and still does today.

Second, he based his sermon on the text, “What does it profit a man, if he gains the whole world but loses his soul?” (Mark 8:36). That was the day I learned that Christ had first asked that question (until then, I had only associated it with the Beatles). But I bring it up because lately I have come to view many Scriptures as applying to the corporate church as much as they apply to us as individuals, which leads me to wonder: What does it profit a church, if it gains all manner of worldly appurtenances but loses the soul of the Gospel? And the soul of the Gospel is to serve, rather than to be served.

I don’t know if I will find a church that puts serving others ahead of serving itself. I don’t know if the idea for The Gift Church, which would do just that, will ever catch anyone else’s attention.

All I know is that I will continue to wait upon the Lord.

3 Responses to Putting ‘The Gift Church’ on Indefinite Hold