It’s been said that “politics makes strange bedfellows,” and over the last few years we’ve been treated to some evidence of that. It’s also been said that “power tends to corrupt,” or (if you prefer) that power “is magnetic to the corruptible,” and I daresay that’s been evident from time to time as well — on both ends of the political spectrum.

But no matter where we are on that spectrum — left, right, or center — it seems prudent to remind ourselves that politicians’ priorities rarely match ours. As Thomas Sowell said,

No one will really understand politics until they understand that politicians are not trying to solve our problems. They are trying to solve their own problems — of which getting elected and re-elected are number one and number two. Whatever is number three is far behind.

Can you think of very many politicians who pursue causes that are independent of their reelection prospects? How many would risk losing their positions in order to achieve something on behalf of someone else?

(Not The Anti-Candidate, that’s for sure.) 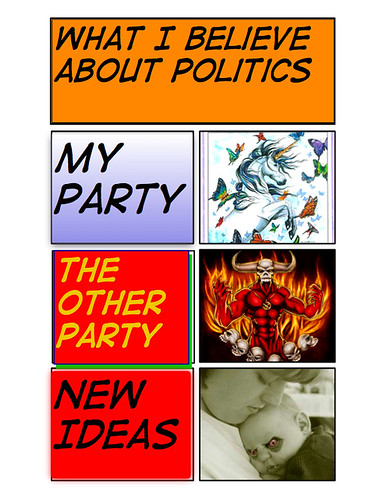 Instead of “new ideas,” I think “different ideas” would be more fitting, but in general this seems to hold true for many people, much of the time. (Image: “Political Guide,” by Jason Nelms, on Flickr under Creative Commons.)

If Mr. Sowell is correct, and the evidence suggests that he is, maybe we’re better off taking care of our own priorities ourselves, and helping our friends and neighbors with their priorities when we can, instead of entrusting them to and relying on politicians who clearly have priorities of their own.

Something to think about. Hope you have a great week!

One Response to Political vs. Personal Priorities