Ray Bradbury (22 August 1920 – 5 June 2012), of course, was a prolific and influential author of fantasy and science fiction — he claimed to be a fantasy writer who was labeled a science fiction writer — and one of his most-acclaimed works is Fahrenheit 451, in which the fire department no longer fought fires, but set them: and in particular, set them to burn books. So this quote of his, from the afterword to the 1979 edition of the novel, is quite interesting:

The problem in our country isn’t with books being banned, but with people no longer reading. Look at the magazines, the newspapers around us — it’s all junk, all trash, tidbits of news. The average TV ad has 120 images a minute. Everything just falls off your mind.… You don’t have to burn books to destroy a culture. Just get people to stop reading them.

That, of course, was years before social media came on the scene. How much more junk, trash, and tidbits of news do we encounter every day — up to and including this blog post? How short have our attention spans become? 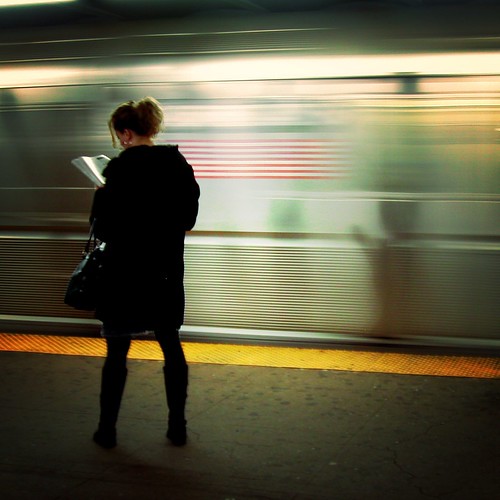 (Image: “On the platform, reading,” by Mo Riza, on Flickr under Creative Commons.)

Years later, in a 1996 interview in Playboy, Bradbury said,

Listen, you can’t turn really bright people into robots. You can turn dumb people into robots, but that’s true in every society and system. I don’t know what to do with dumb people, but we must try to educate them along with the sharp kids. You teach a kid to read and write by the second grade, and the rest will take care of itself.

Take that last quote, of the importance of teaching children to read and write at an early age, and think about it in light of what the first warns against: the barrages of images we encounter, the reduction of text to snippets, even today the vapid combinations of text and images known popularly as “memes” (but which insult the very name they carry when you consider that “meme” more broadly means an irreducible element of culture or knowledge).

How hard have we made it for teachers these days? Think about how powerfully children are affected by images and sounds, compared to text. Think about the difficulty of teaching children to read and write who are brought up in this age of constant, cacophonous media — and the importance of doing so, if we are to prepare them to avoid becoming robotic in their thinking.

When I think about that, I’m thankful for parents and others who introduced me to books, and for teachers who helped me get the most out of them (including those who let me sit in the back of the classroom and read while they taught lessons I’d already learned). And I’m especially thankful for teachers who carry on today in the face of the obstacles in front of them.

And I’m thankful for you, taking a bit of time out of your day to read this. I hope it was worth your while, and that you can think of lots of people to thank for your ability to read!

Have an excellent week!