On this date in 1786, the General Assembly of the Commonwealth of Virginia enacted the “Virginia Statute for Religious Freedom” into law. Thomas Jefferson had drafted the statute in 1777, and it was first introduced in the assembly in 1779. Jefferson considered the statute so important that he asked for it to be included as one of three accomplishments listed on his tombstone, along with the Declaration of Independence and founding the University of Virginia.

I love the way it begins:

Indeed, and God wants us to use our minds well! There’s a reason the prophet Isaiah says, “Come, let us reason together.” 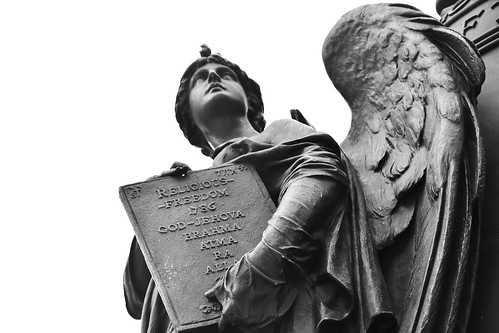 Detail on a monument to Thomas Jefferson in Louisville, Kentucky. (Image: “Religious Freedom,” by Don Sniegowski, on Flickr, under Creative Commons.)

tend only to beget habits of hypocrisy and meanness, and therefore are a departure from the plan of the holy author of our religion, who being Lord both of body and mind yet chose not to propagate it by coercions on either, as was in his Almighty power to do

“Hypocrisy and meanness.” Lord knows that often we cannot help but be hypocritical, but I pray God will forgive us if we persist in it and if our religious practice is either unkind or shabby.

As someone who believes that science and faith agree more than they disagree, I find this clause amusing:

And given the unfortunate antagonism we face from time to time, no matter which side of whatever divide we find ourselves upon, this part is encouraging:

And finally, … Truth is great, and will prevail if left to herself, … she is the proper and sufficient antagonist to error, and has nothing to fear from the conflict

Unless we disarm Truth by restricting “her natural weapons, free argument and debate.” Let’s try not to do that, shall we?

And, finally, the act declared that

… all men shall be free to profess, and by argument to maintain, their opinions in matters of Religion, and … the same shall in no wise diminish, enlarge or affect their civil capacities.

Religious freedom: It’s a marvelous thing. I hope you have opportunity to practice yours this week.