Heinlein Was Right: A New Look at His Rules for Writing

(Adapted from an article I sent out in my newsletter last November.)

Many writers have commented on the “rules” for writing that Science Fiction Grand Master Robert A. Heinlein put forth many years ago, but one rule in particular has tripped people up. 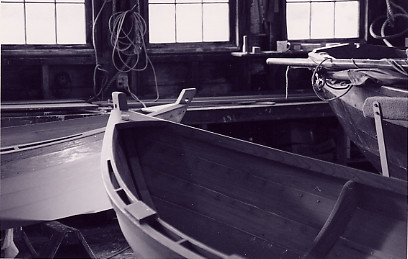 (The boat is built, but it’s not yet finished. Image of “Merrimack Skiffs in the Finishing Room at Lowell’s Boat Shop in Amesbury, MA,” by Bruce Berrien, on Flickr under Creative Commons.)

For those who don’t know, Heinlein’s rules were included almost as an afterthought in a brief essay he wrote for Of Worlds Beyond: The Science of Science Fiction Writing (Fantasy Press, 1947). He wrote, “I shall chuck in as a bonus a group of practical, tested rules which, if followed meticulously, will prove rewarding to any writer.”

The rules, which he also called “business habits,” that concluded his essay were:

I’ve heard and read a lot of commentary complaining about rule 3, to the effect that Heinlein was not in favor of editing or somesuch. I think that’s nonsense, and results from a failure to read what the rules actually say.

Note that rule 3 doesn’t say “don’t edit,” or “don’t rewrite,” or even “refrain from editing” — it stays “refrain from rewriting.” That is, once you’ve told the story you wanted to tell, resist the urge to change it into a different story. This rule is not about cleaning up a story; it’s about gross revisions and restructuring.

How can I be confident that Heinlein was not referring to editing a story before trying to sell it? Because I interpret rule 3 in light of rule 2.

All the commentaries I found on the Web* indicate that rule 2 simply means pressing on with your writing until you type “THE END” into the manuscript; in fact, the most common complaint seemed to be that actually completing every story one starts may not be advisable. However, that reads more into it than is actually there, because Heinlein didn’t say to finish every story one starts, but rather to finish what you start. Failing to complete a particular story simply leaves one with an incomplete story; but eventually, to be successful as a writer, one must finish writing at least one story.

But there is another meaning to the word “finish” that people seem not to have considered. Heinlein, who was an engineer and a craftsman, certainly understood that the process of building anything proceeds in stages and the final stage of most projects is the finishing stage: the crown moulding, baseboards and paint applied to the house; the stain, sanding and varnish applied to the piece of furniture (or the boat, in the image above); the continuity, characterization, and setting details applied to the story.

Thus, “finishing” a story is more than completing it, more than typing “THE END” — it’s sanding off the rough edges, adding color or detailing, maybe installing hardware or accessories — to create a truly “finished” piece of work as opposed to the foundation or framework or, simply, unfinished form of a story.

I have no proof that Heinlein actually meant “finish” in this way, but I’m confident that he was familiar with the idea. Even before he introduced the rules/habits, Heinlein called spelling, punctuation and grammar the “word-carpenter’s sharp tools” — and he certainly knew that the tools are important to making (and finishing) a thing but they are not usually the thing itself.

So, finish your stories before you send them in (rule 2), but don’t rewrite them unless and until you have to (rule 3).

It is possible, however, that I’m reading too much into this and that Heinlein did mean “finish” only in the sense of “completion.” He concluded his essay with this sentiment:

The above five rules …. are amazingly hard to follow — which is why there are so few professional writers and so many aspirants, and which is why I am not afraid to give away the racket! But, if you will follow them, it matters not how you write, you will find some editor somewhere, sometime, so unwary or so desperate for copy as to buy the worst old dog you, or I, or anybody else, can throw at him.

But I maintain that if you “finish” your stories in the way I suggest — by cleaning them up, making them presentable, and making them as good as possible — then “the worst old dog” you write will be more likely to compare favorably with the vast majority of the stories put forward by the “many aspirants” who send out their stories before they are ready.

What do you think?

___
*I make no claim of having actually found all the commentaries on the Web.

2 Responses to Heinlein Was Right: A New Look at His Rules for Writing