Half-Brained Things, Trying to Make the World a Little Better

Today is Sir Arthur Conan Doyle’s birthday (22 May 1859 – 7 July 1930). The creator of Sherlock Holmes, Doyle has been celebrated by fans and writers for decades, so of course starting the week with a quote from him would be appropriate.

To follow on the heels of last week’s entry, L. Frank Baum’s quote about “the betterment of the world”, consider these two 1894 quotes from Doyle. First, an admission that we as human beings may not be all we think we are:

What can we know? What are we all? Poor silly half-brained things peering out at the infinite, with the aspirations of angels and the instincts of beasts.

And second, a bit of his desire to improve some small part of the world simply by being a person of good character:

I should dearly love that the world should be ever so little better for my presence. Even on this small stage we have our two sides, and something might be done by throwing all one’s weight on the scale of breadth, tolerance, charity, temperance, peace, and kindliness to man and beast. We can’t all strike very big blows, and even the little ones count for something. 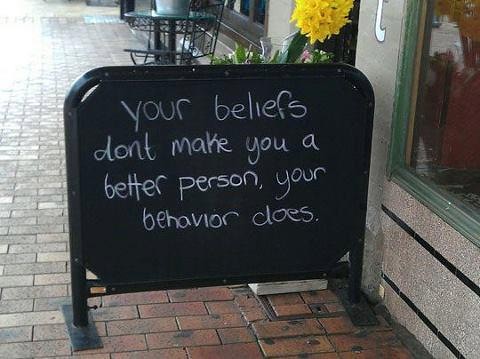 (Image: “Your beliefs don’t make you a better person, your behavior does,” by SoniaT 360., from Flickr under Creative Commons.)

Even though very often I feel both “silly” and “half-brained,” I do hope that I can do more to improve the world than to harm it. I hope you can, too.