(In case you missed them: Dragon*Con Pictures, Part 1: My Friends.)

This year I’ve discovered that I really enjoy filk (genre-related folk music) and filking (playing and singing same). Part of that is the warm reception “The Monster Hunter Ballad” has received over the last few months, and part of it is an immense sense of joy at doing something I never thought I could: writing and performing original music.

How did I get into this filking thing? It was an overly long journey:

I played a few songs on Friday night, and went back on Saturday night to listen even though I had a headache. Then I was back again to play on Sunday night — where I took pictures!

First, the director of the Filk Track, Robby Hilliard: 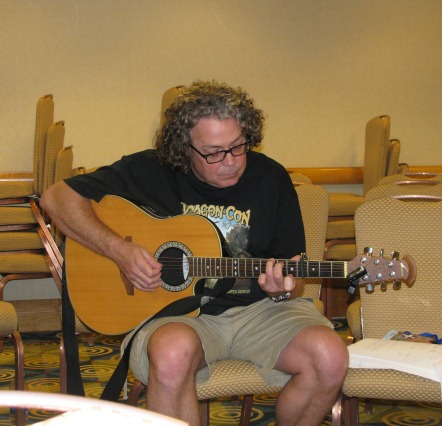 That guitar he’s playing looks awfully familiar. (I actually loaned my guitar out a couple of times.) Robby did a great job organizing the track, and his whole staff was very friendly.

Here’s Alex Boyd, who on Sunday night set himself the challenge of playing only original filk that he had made up that day. 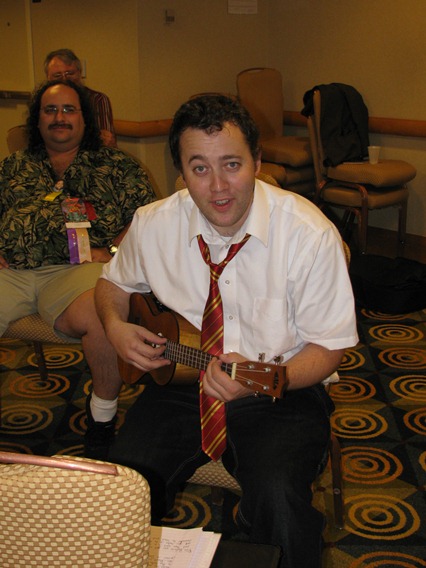 One of the songs he did was, “Don’t Bring Your Guitar to Dragon*Con.” Given the difficulty of maneuvering through the crowds, he had a point. I bought one of his CDs. 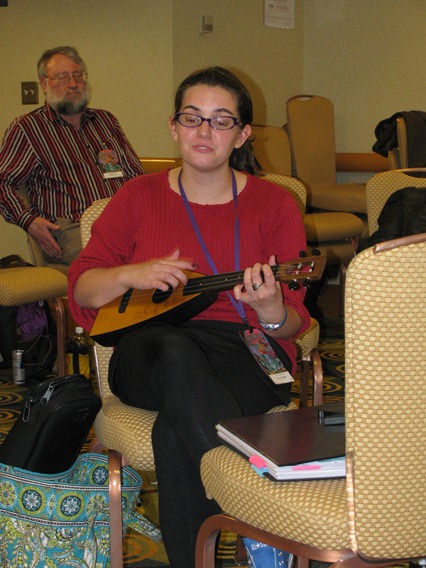 Tally got very tired of singing “The Dragon*Con Song” by Sunday night; she probably sang it a dozen times over the course of the weekend. After Dragon*Con she posted on her Facebook fan page that she had been named one of Glamour Magazine’s “Top 10 College Women of 2011.” If I’d known we had a celebrity in our midst, I would’ve asked her to autograph her CD when I bought it.

Finally, guitars and ukuleles were not the only instruments to be found in the filk circle: 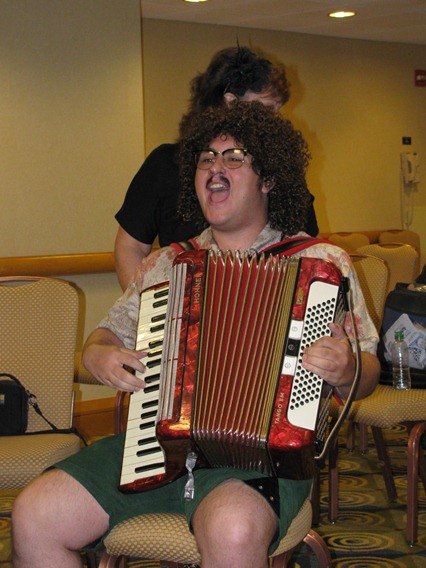 (The anonymous accordion player who wowed us all on Sunday night.)

In summary, a splendid time was had by all.

And meanwhile I keep coming up with new song ideas, which is both a little scary and (to me, at least) a little cool.

___
*I included some of this history in a previous blog post.
**It was okay, not great. I think my second novel is better, though neither one has been published.