(The Starfish nuclear explosion, as seen from nearly 900 miles away in Honolulu, HI.
US Government image from Wikimedia Commons.)

Explorer 15 was instrumented with an array of radiation detectors, as its mission was to study the radiation belt produced by the Starfish nuclear test conducted on July 9, 1962. The Starfish test — conceived by the Atomic Energy Commission and what would become the Defense Nuclear Agency, and launched from Vandenberg AFB by the Air Force — revolutionized the understanding of electromagnetic pulse, but the energetic particles it created contributed to the failures of several low-earth-orbiting satellites.

Five years ago today — October 24, 2007 — the People’s Republic of China launched a spacecraft to orbit and study the Moon.

Chang’e 1, “named for a Chinese legend about a young goddess who flies to the Moon,” entered lunar orbit on November 7, 2007. It carried eight different scientific instruments, and its objectives were to

obtain three-dimensional stereo images of the lunar surface, analyze the distribution and abundance of elements on the surface, survey the thickness of lunar soil and to evaluate helium-3 resources and other characteristics, and to explore the environment between the Moon and Earth.

The spacecraft remained in orbit around the Moon until March 2009, according to the Wikipedia entry.
___

In other space history, 50 years ago today — October 24, 1962, during the Cuban Missile Crisis — the Soviet Union launched Sputnik 22, which was intended to be an interplanetary mission to fly by Mars. The spacecraft and the upper stage of the rocket

either broke up as they were going into Earth orbit or had the upper stage explode in orbit during the burn to put the spacecraft into Mars trajectory. In either case, the spacecraft broke into many pieces, some of which apparently remained in Earth orbit for a few days.

That debris reportedly showed up on the radar at the Ballistic Missile Early Warning System (BMEWS) site in Alaska, and “was momentarily feared to be the start of a Soviet nuclear ICBM attack.”

Those were scary times. This incident points out the simple fact that space launch technology is of a kind with ballistic missile technology, which is why we spent so much time and effort protecting our U.S. designs and methodologies when I served in the Defense Technology Security Administration.

As noted in this NASA biography, Yeager’s performance in the USAF Test Pilot School at Edwards AFB led to his selection as the X-1 pilot.

I saw General Yeager in the Officer’s Club when I was stationed at Edwards. It was one of those unexpected celebrity sightings — standing at the salad bar and suddenly realizing the guy next to you is this famous person you’ve heard of all your life. And just like that, the moment was over and we both took our salads back to our tables.

My friends and I started the “Space Warfare Forum” about 15 years ago or so, if I recall correctly — we were stationed at Falcon Air Force Base, which is now Schriever AFB, in Colorado, and actually started the forum as a brown-bag lunch discussion group within the 4th Space Operations Squadron. The discussions continued after I transferred to Offutt AFB, Nebraska, in 1998, but we soon transitioned into an e-mail format that continued when I transferred again to Thule Air Base, Greenland, in 2000.

The e-mail discussions grew unwieldy, so I installed a bulletin board system on my web site which we used for a little while. The first version was susceptible to spam commenting, so I transitioned to the current vBulletin setup (direct linked here if you’re at all interested). We published an article — “Toward Space War” — based on some of the discussions, and at one time the forum had about 100 members, but after the spam debacle lots of folks dropped out.

Keeping the forum available is easy enough, but I’m not sure there’s any point. In the past I’ve made the platform available for other groups — my high school had its own section for alumni until the spam blowup happened, and Port Yonder Press used it for a short time for an online writing course — but those are as defunct as the space warfare section. At this point I’m pretty sure no one but me would miss it if it disappeared, and I’m not sure there’s much value in it from an archival standpoint.

I’m interested in everyone’s opinion on the question, but I’d especially like to hear from forum members (if any of them should read this): Should I terminate the Space Warfare Forum? And if not, what should I do with it?

Thirty years ago today — June 27, 1982 — the Space Shuttle Columbia launched from the Kennedy Space Center on the final R&D flight for the shuttle fleet. Mattingly and Hartsfield landed the shuttle on July 4th at Edwards AFB, where they were greeted by President and Mrs. Reagan.

(Cross-posted with light editing from the Industrial Extension Service blog.)

If a natural disaster or major accident impacted your company, how quickly would you be able to recover? Do you have backups of important files stored off-site? Do you have ready and portable access to contact information for your employees, customers, and suppliers? Do you have an emergency plan, and have you tested it? 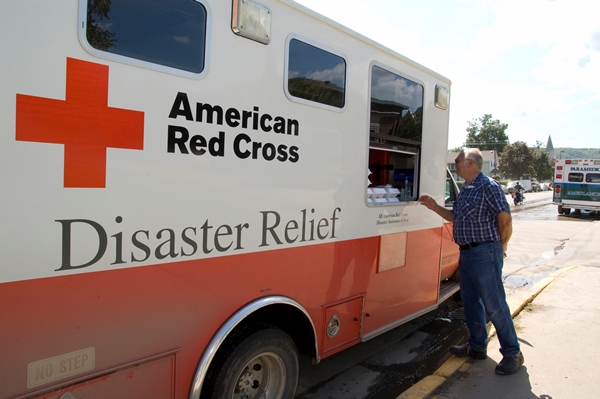 Many years ago I was the Chief of the Disaster Response Force at the Air Force Astronautics Laboratory at Edwards Air Force Base, during which time I led the responses to two rocket propellant fires, so I’ve learned a thing or two about what it takes to handle emergencies. But last Tuesday I learned a few new things about disaster preparedness from a business perspective, and soon I’ll be able to apply my prior experience and what I just learned to teach the “Ready Business” course.

Ready Business is a half-day course designed to give businesses some practical tools to get prepared and stay prepared. The program operates under the guidance of the Federal Emergency Management Agency, and is being brought to North Carolina in a team effort by the Cooperative Extension Service, the Industrial Extension Service, and the Small Business Technology Development Center.

Several of us will be available to teach the Ready Business course, and we hope to offer it many times throughout the state. If you’re interested, let us know!

Finally, while we’re on the subject of disasters, I love this bit from Karl Smith and the “Modeled Behavior” economics blog:

If we actually want to help the world, we focus on details and that usually means the short term. Things we can see closely and understand the nuances of. In short, we Stop Disaster.

One day we will lose and the world will come to an end. The apocalypse only has to win once. Our job is to make sure that that day, isn’t today.

Maybe we can’t truly stop disaster, but we can be ready for it — and that’s what disaster preparedness is all about.

The six satellites launched were

The Space Test Program is part of the Air Force’s Space Development and Test Directorate.

Forty-five years ago today — February 8, 1967 — France launched the Diademe-1 satellite atop a Diamant-A rocket from their Hammaguir, Algeria, launch site. Exactly a week later they launched Diademe-2. These appear to be the last launch campaigns conducted at the Hammaguir site. Diademe-1 and its sister satellite were “designed for experimental geodetic studies using Doppler effect and laser telemetry techniques,” and were tracked by French and other ground stations around the world. According to this Wikipedia page on the Diamant launch vehicle, Diademe-1 was placed in a lower-than-expected orbit; however, the National Space Science Data Center did not mention that fact.

On the same 1967 date as the Diademe-1 launch, the U.S. launched a Defense Meteorological Satellite Program Block 4 satellite from Vandenberg AFB on a Thor rocket. And on this date 5 years earlier — i.e., 50 years ago — a Thor-Delta launched from Cape Canaveral put the Television and InfraRed Observation Satellite TIROS-4, also a weather satellite, into orbit.

Fifteen years ago today — January 12, 1997 — the Space Shuttle Atlantis launched from the Kennedy Space Center to dock with the Mir (“peace”) space station.

(Shuttle Atlantis rolling out to the pad from the VAB [December 1996]. NASA image.)

On a belated space history note, 45 years ago yesterday — January 11, 1967 — the Intelsat II F-2 communications satellite launched from Cape Canaveral on a Delta rocket. It was positioned over the Pacific as the first fully-operational Intelsat II platform.

F-2 was the first Intelsat II satellite over the Pacific because its predecessor, F-1, did not reach its intended orbit. F-1’s “apogee engine thrust terminated approximately 4 seconds after ignition,” stranding the spacecraft in the wrong orbit.

Interestingly, an apogee engine malfunction nearly caused the loss of the USAF’s Advanced Extreme High Frequency (AEHF) satellite after its launch in July 2010. AEHF operators and engineers figured out an innovative orbit-raising sequence that rescued the spacecraft and put it in the proper operating position last October. Well done!