Amazon Rankings and the Power of a SINGLE Sale

Back in late February, Larry Correia included the Amazon listing for my album in the “book bomb” he orchestrated to generate interest in stories that he and Brad Torgersen recommended for Hugo Award consideration. (For more on how the latter turned out, read this.) 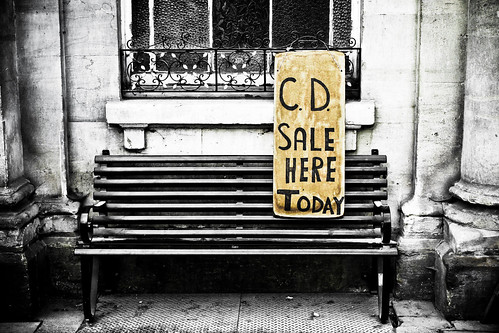 (“CD Sale,” by Jake Johnson, via Flickr under Creative Commons.)

The purpose of Larry’s frequent “book bombs” is to encourage people to buy an author’s work, and in particular to buy it on Amazon because improving a book’s ranking generally makes it more visible to additional prospective customers. Products with higher rankings show up more often in searches and the Amazon system selects them more frequently as recommendations. The idea behind the book bombs is two-fold, then: first, to help authors get paid for their work, and second, to put them in a better position to keep getting paid.

Anyway, since the only thing I had available for sale was my album, Larry included it along with other people’s books, which I appreciated very much. The results were curious to me, though.

Because of the plug I sold a grand total of one physical CD, and no electronic music, but my Amazon sales ranking improved by nearly a million-and-a-half places! Indeed, it hit unheard-of heights (for me) and now, nearly three months later, is still ranked far better than it was to begin with.

I don’t have the exact figures for the earliest rankings, because I wasn’t paying close enough attention, but here’s what I remember (I’ve rounded these to two significant digits):

I don’t know about you, but that much movement based on one sale seems a little crazy to me. Imagine what would have happened if two people had ordered my CD! It might suddenly have become a bestseller. Of course, it could just indicate how few CDs are ordered from Amazon on any given day.

I don’t know if the book rankings bounce around so much, but it seems apparent that if you ever buy things on Amazon — even single things! — you wield a great deal of power.

While we’re on the topic of Amazon, another tidbit you might not know: Reviews affect search results, too. My little CD doesn’t have any reviews there (and precious few elsewhere), so if you’ve got an Amazon account and a few spare minutes, it would be awesome if you’d bounce over to the Amazon page and post a little review. Just a few words about your favorite song, even with only a moderate rating, would make a huge difference.

Amazon is, of course, the biggest kid on the block when it comes to online shopping. But I’ll let you in on a little secret: when people buy my album from Bandcamp, they pay less and I make more money. (You have my permission to share that little secret with anyone who might appreciate the album or the bargain.)

If you take nothing else away from this, know these two things: I appreciate you being here, and you have more influence on the success of independent writers and artists than you probably realize. But with great power comes great responsibility, so use your power wisely!

___
P.S. Yes, this is another post adapted from a newsletter article. That’s just the way it goes.